It won’t help a bit.

Raúl Castro is not on death’s door, is he? Nor are the rest of the Party operatives.

I don’t support the relations we have with Red China.

The Gullwing Mercedes SLs sell for million$ at auction; at last count there were 3-5 of them in varying conditions in Cuba. There’s one with a palm tree growing into it, for example.

I bet ther’d some rare vintage Vettes, TBirds, etc. there too.

The question is: “What condition are they in?” But the Mercedes should be pretty bulletproof in terms of not losing money on them.

225 posted on 12/17/2014 12:00:14 PM PST by GOPsterinMA (I'm with Steve McQueen: I live my life for myself and answer to nobody.)
[ Post Reply | Private Reply | To 155 | View Replies]
To: NKP_Vet
Castros are not dead yet and they have lined thousands up in front of ditches and mowed them and it is still being done if you open your month and say the wrong thing. THis is just more of Obama’s cozing up to dictators. The marxist,leftist bastard.

Say it again louder if need be. Yes, something like 20,000 during his "glorious" Revolution, it is sickening...

A Marxist leaning Pope blessed the Marxist American president embrace of Castro's genocide communist regime condemning the Cuban enslaved people to eternal damnation. On the deal Castro liberated an American illegally imprisoned in Cuba in exchange for the freedom of three Cuban spies serving prison terms in U.S. and the normalization of relations with a country that occupied for decades a top position in the list of the State Department ‘s terrorist countries.

The Cuban regime tried to obliterate New York and Washington with a nuclear attack during the October Missile Crisis of 1962. “In November 1962, the Castro brothers’ and Che Guevara’s agents had targeted Macy’s, Gimbels, Bloomingdales, and Manhattan’s Grand Central Station with a dozen incendiary devices and 500 kilos of TNT. The Holocaust was set for detonation the following week, on the day after Thanksgiving.” (Humberto Fontova)

Castro has been a strong ally of Islamic terrorism. Cuba continues to serve as a base for coordination and mutual support among transnational terrorist organizations. At Tehran University he stated to the thunderous applause of students and faculty, "The imperialist king will finally fall,” (AFP, May 10, 2001). Immediately afterward the Iranian Press Service proudly proclaimed that "Iran and Cuba reached the conclusion that together they can tear down the United States.” (IPS, May 10, 2001).

It is suicidal turning a blind eye to Castro, a deadly enemy at 90 miles south of Key West that does not hide his hatred for U.S.

To complete Obama’s betrayal of the American people, with the normalization of relations comes the opening to Cuba of the American and International bank credits that will sustain the Cuban regimen passing to the American taxpayers the same heavy burden that helped to bankrupt the Soviet Union.

When The FBI Tracked Terror-Suspects—Literally!

... There will be vast repercussions from this action.

The Cuban Exiles are TOILET PAPER.

It’s really aggravating because they haven’t done anything wrong.

sounds to me like a few democrat donors are in key positions to take advantage of this.

You may be right, but with the real estate market freeing up, there’s an increase in northeasteners heading down there for retirement and avoiding the death tax.

Agreed.
Everything he has done was done to hurt America.
He'll keep his pattern here as well.

And, I'll bet good money that Dinesh D'Souza will say the same if asked about this in an interview.

235 posted on 12/17/2014 1:11:54 PM PST by RandallFlagg (Vote fraud solution: Stake, Rope, Sugar and Bullet Ants.)
[ Post Reply | Private Reply | To 9 | View Replies]
To: Olog-hai; gandalftb; TigerLikesRooster; WhiskeyX; SunkenCiv; Tailgunner Joe; lodi90; ...
It increases Putin’s influence, especially over the USA, which under Obama is becoming more like what was once called the Second World.

It is the opposite: This prevents Soviet 2.0 (Putin-Russia) to use Cuba as they want. Among other things, this
http://en.wikipedia.org/wiki/Lourdes_SIGINT_Station will not be reopened.

If you believe that, then by all means allow Obama, the world’s biggest enabler of Putin, to tell you another one. Never mind “Putin Today” and all the other Putin-owned Russian media outlets.

So does this mean the Mafia can re-open casinos in Havana? 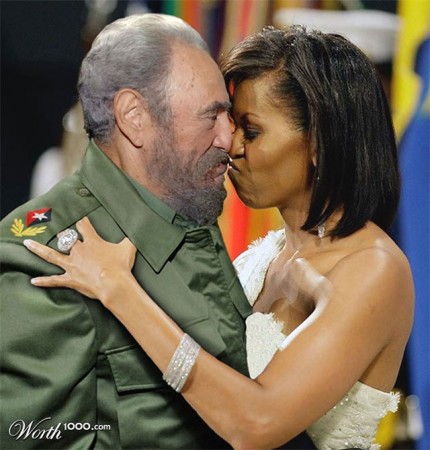