No, it’s not a “Germany invades Poland” momeber.

Here’s the 90 second blurb on what happened.

1. 1000 AD: Muslims invade the continent of India which has many nations but similar religions and similar cultures. Many get converted over the centuries

2. 1947 the two unions: India and Pakistan are made of myriad nations and are distinguished by Paki being majority (80%) Muslim and India being 82% Hindu. Today Paki is 98% Muslim and India is 79% Hindu.

3. Kashmir in 1947 was a kingdom consisting of 3 parts - the Kashmir valley and north-west (Muslim dominated), Jammu (south and Hindu dominated) and the Ladalh plateau in the north-east, essentially part of Tibet and hence Buddhist dominated.

4. Kashmir’s hindu king decides to go it alone, but gets invaded by Pakistan. He then pitches in to India. India helps him out but the Pakist get most of the north-west Muslim dominated area except the Kashmir valley.

5. the entire troika gets clubbed into one India state (nation really) despite they being three distinct areas (culturally, religious and linguistically - but the JAmmu and Kahsmiri languages are both Indic, so related.

7. India keeps J&K (Jammu and Kashmir) as a ‘special status area’ - kinda like Puerto Rico’s status but where non-JKs can’t buy land there and also that the JK politics becomes dominated by 2 ruling dynasties.

8. the Hindutva party of the BJP decides to scrap it in 2019 and make two union territories.

This is not an invasion, this is only a 70year old overdue integration.

and here's a religious demographics map 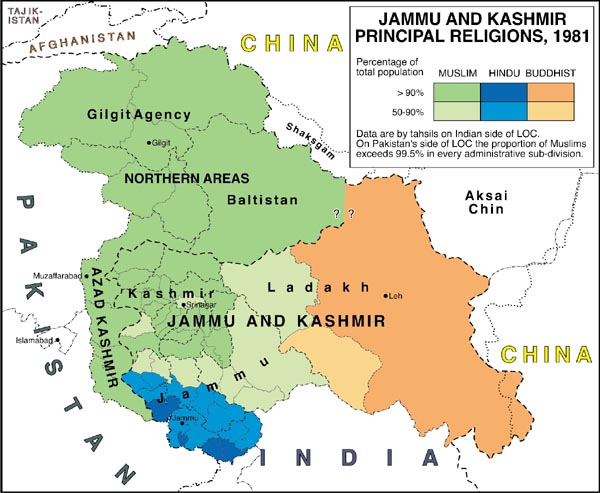