At the December Democratic debate, when asked to comment regarding several dire economic forecasts evaluating her proposed wealth tax on the economy, Senator Warren responded: “oh – they’re just wrong.” That response elicited applause from the audience and zero follow-up questions. Shame on both the audience and the moderators. Just glib is not good enough.

In an 1819 Supreme Court Case, the Supreme Court (McCollough v Maryland) correctly noted that “the power to tax is the power to destroy.” While this case was directed at taxes imposed by a state, it is a comment worth remembering.

Senator Warren’s wealth tax proposal is only one of several proposed tax increases on the wealthy and on U.S. corporations. Senator Warren has proposed each of the following taxes on the wealthy: (a) a wealth tax, (b) an increase in the capital gains tax, (c) an implementation of capital gains taxes on appreciation rather than upon sale of capital assets, and (d) an increase in the top ordinary income tax rate. She has also proposed dramatic increases in corporate income taxes on larger U.S. corporations.

There is no evidence that Senator Warren is proposing that Congress pick from a menu of her different tax plans. She has proposed each of these tax increases.

Virtually every economic analysis and modeling performed to date by academics has been done, stiletto like, with respect to the impact of a wealth tax on the economy. The Wharton study indicates that Senator Warren’s wealth tax will not generate the taxes promised. This study, while interesting, does not address either the total federal revenues or the combined economic impact from the totality of her proposals.

The question asked at the Democratic debate should not have been a focus solely on Senator Warren’s wealth tax; the question and focus should have been and should be with respect to the total economic impact of the tax proposals in her political quiver. How would the sum of her tax proposals impact the economy?

Let’s examine the impact of all of Senator Warren’s proposed individual tax increases on Jeffrey Bezos, assuming each of her proposals were law at January 1, 2019.

Senator Warren proposes to tax the appreciation of his Amazon stock (without a sale) with a new 58.2% federal tax rate resulting in a new tax for Mr. Bezos of $10.1 billion. Mr. Bezos’s wealth tax would be $6.3 billion. Neither the new capital gains tax nor the wealth tax is the result of any transaction and therefore Mr. Bezos would be forced to sell Amazon shares to pay his new Elizabeth Warren created taxes.

Mr. Bezos would be forced to sell $36.9 billion dollars of Amazon stock (35% of his holdings) and pay $20.2 billion dollars of federal income taxes on that sale to net the funds to pay the $10.1 billion of federal income taxes on his stock appreciation and the $6.3 billion of the wealth tax. (Note that if Mr. Bezos was a resident of California, his total tax bill would increase by many billions more; his state of residence, Washington, has no income tax. This should scare high tax states to death. How many additional tax dollars would cause a billionaire to move from New York or California to Washington, Florida or Texas?)

And the tax parade is annual. Every year, Mr. Bezos would be faced with selling a very significant percentage of his remaining holdings to pay his new federal taxes.

Putting $36.9 in taxes from a single individual in some perspective, Mr. Bezos would be paying an amount equal to the total state budgets of Delaware, Idaho, Montana, New Hampshire, South Dakota and Vermont combined plus $5.2 billion. Further perspective, if Amazon stock declined 20% because there were no buyers at the current price, those institutions and pension funds that have invested in Amazon would lose value equal to almost $200 billion.

Sometimes there are economic events where everyone loses – a sinking tide lowers all boats.

And what of the economy? Who would be the buyers of Amazon stock to the tune of $36.9 billion knowing that in the next year, Mr. Bezos would be selling another $12 billion of Amazon stock? And of course, virtually every billionaire would have their own Amazon stock to sell and few, if any billionaires would be purchasers of stock. Would stock prices collapse? Would America wake up in three years and find out that the sovereign wealth funds of several countries purchased a significant percentage of the country’s largest companies?

Senator Warren and Senator Sanders as well are running to become President of the United States. If elected, their decisions and ideas will be equally important as the decisions of each of their predecessors. With respect to every issue, debate moderators, rally organizers and the press cannot accept incomplete answers to important questions. Just glib is not good enough.

TOPICS: Culture/Society; Editorial; Politics/Elections
KEYWORDS: fauxtahonahwarren; jeffbezos; jobseconomy; taxes Navigation: use the links below to view more comments.
first 1-20, 21-25 next last
1 posted on 01/04/2020 4:23:29 AM PST by Kaslin
[ Post Reply | Private Reply | View Replies]
To: Kaslin
I love when liberals fight to the death.

I want to see more gore, though. Maybe as the months progress into November we can get to some good old fashioned dismemberments.

Did she talk about confiscating Soros’ wealth?

has either Warren or her criminal cabal at Harvard
Law paid a single (1) group of American Indians
reparations for her/their LIES and fraud??

no, instead they hoisted Obama, Warren and Romney onto
America.

Warren is more likely to take Bezos’ money than soros’. Soros funds democrat projects. Bezos earned his money through hard work (that of his employees). 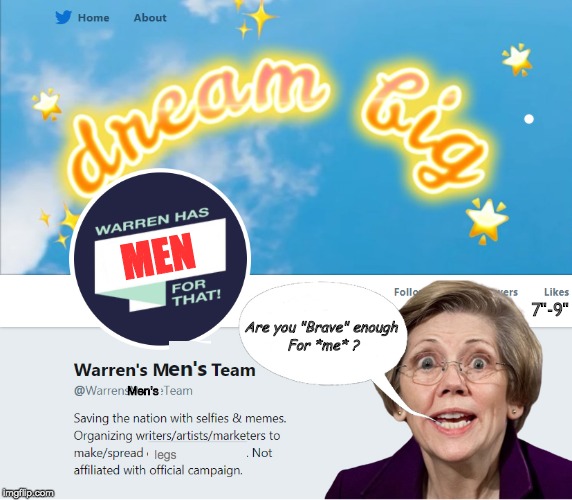 Would the former Mrs. Bezos also have to sell a significant portion of her holdings?

At some point the wealthy will say to people like Gray Beaver, there will be a trade, my wealth for your life

All these billioniares are big lefties, right?

Why does their filthy lucre have to be confiscated? Why aren’t all these lefty billioniares putting their money where their mouths are and voluntarily writing whopping big checks to the Treasury?

A Bezos-specific Bozo Tax I could go for.

“Bezos earned his money through hard work (that of his employees).”

Damn Bezos for having the unmitigated gall to create a business that provides 750,000 people with jobs.

Bezos seems to hate Trump (through the WaPo). Would he vote for or support Warren should she become the candidate? Would that make him a “man of principle?”

I will argue that the purchase of the Compost was a strategic move to save the voice, the leading propaganda organ, with money.

The dilemma of which you note is tactical in nature. Bezos is likely not active at the tactical news level.

I agree that Bezos is unlikely to have daily interaction with the WaPo editors. But an owner can set the tone for the staff, rein them in a bit with guidelines, or encourage them to go full bore. And, the WaPo is a full-bore 24/7 propaganda organ. He has to approve, at least tacitly.

Warren, and other Socialists in the Democrat party are blissfully ignorant of the means by which Bezos, Gates, Rockefeller, and many others gained their great wealth: They figured out ways of producing or selling things cheaper or better than anyone else could, and millions of people paid them to do it. If people like Warren start to confiscate that wealth, the result will be that people will eventually pay more for less gain. That’s why Socialist governments always collapse.

An unfortunate side effect of this process is that others (like Romney, Steyer, Buffett, and more) can also use the same system to make billions buying up failing businesses and destroy the bad parts and their jobs rather than using their resources to make them better.

Still, the net result is a better, cheaper cost of living for all. Socialism fails that result for everyone.

Warren is determined to punish success.