TULSA, Okla. - When President Donald Trump takes the stage at his first rally in three months on Saturday night, the scene in Tulsa, Oklahoma, will be familiar: A large venue filled with ardent supporters wearing “Keep America Great” hats and T-shirts.

But outside the 19,199-seat arena is a country reshaped by the coronavirus pandemic, an economic collapse and a wave of protests over police brutality and racial injustice, a trio of crises that have dented his support just months before the Nov. 3 election.

Trump’s campaign advisers believe the rally is a way to rejuvenate his base and display the enthusiasm behind his re-election bid, at a time when a string of national and state opinion polls have shown Trump falling behind his Democratic rival, Joe Biden.

But even some Republican allies worry that his divisive rhetoric and unapologetic appeal to his conservative base may appear increasingly out of step with changing public opinion in the aftermath of last month’s killing of George Floyd, an unarmed black man, while in police custody in Minneapolis.

“His style and message won’t change, but the world has. I don’t know if he can get to places that people now care about,” said Amy Koch, a Republican strategist based in Minnesota.

More than a dozen black community leaders, activists and ministers who spoke to Reuters this week said they feared in particular for the arena workers, most of whom are elderly African Americans, a demographic that public health experts warn is extremely susceptible to the virus.

“The president’s rally here just seems to make the threat of coronavirus even more real and frightening from my perspective,” said the Rev. Ray Owens of Tulsa’s Metropolitan Baptist Church.

RIOTERS AND LOOTERS NO, how ridiculously stupid! can you just see all the heads bobbing yes

“...and a wave of protests over police brutality and racial injustice, a trio of crises that have dented his support...”

How, pray tell, does police brutality accrue to the responsibility column for Trump? With Trump in charge for three and a half years, how does racial injustice accrue to Trump’s responsibility? Not to mention the Chinese seeded virus.

” we’re really, really pissed off at everything we’re seeing, and there’s a whole lot of us.”

You got THAT right!

Anything to stop Trump.

What’s weird is that, at the bottom of it all, is their realization that Ruth Ginsburg probably won’t last ANOTHER four years if Trump wins and we WILL get a pro-life person in there (although the squishy way the Supreme Court’s been acting, I’m not sure that’ll mean much unless even more of them kick off). What I’m not sure of is why that is their greatest fear. Are they afraid the world is going to be overrun by (gasp!) babies? What IS it with these monsters and their desire to kill the unborn? Is evil imprinted in their DNA or something?

44 posted on 06/17/2020 5:21:52 AM PDT by Pravious
[ Post Reply | Private Reply | To 33 | View Replies]
To: FatherofFive
My friends in Tulsa say folks from around the entire country are trying to tickets. But the Republican leadership is telling them to stay home and save your money………………..The Rats scared to see over-the-top support for Trump.

Something about those two thoughts don’t show a connection. Why would the Republican leadership tell people to stay home just because the event is sold out? I would love to see Tulsa flooded with 5 million people… this is about making a statement that Trump support is far far bigger than the leftist media and the Rats want anyone to believe and the only way the Rats can win is by using voter fraud.

They mis-spelled “RADICAL” in the headline.

Yeah, I’ll bet you wish that? Go away morons.

More fake news. The lame stream media will be throwing everything at Trump in an attempt to brainwash us......and they will fail.

48 posted on 06/17/2020 5:39:22 AM PDT by kenmcg (tHE WHOLE)
[ Post Reply | Private Reply | To 1 | View Replies]
To: Mark17
That a significant portion of Americans continue to try to "hide" from the Chinese flu will continue to extend the natural "infection curve" even further beyond the peak two months ago. At this rate, people will still be hiding in fear of this flu into next year!

It's long past time to get out, get with friends and start living again ... and to re-elect President Trump to rid of us of all of this domestic terrorism!

You mean other than philanderer, womanizer, tax cheat, Russian spy, Russian colluder, impeachment trials, racist, xenophobic, mental illness? I’m sure I missed something, but there is just too much to remember.

This is what is today referred to as “journalism.”

Trump rallies are visual proof that his supporters are just regular, normal people. As he fills up arena after arena with white people across the country, it shows that either there are a vast number of racist white supremacists or the Democrats, media and the left are lying.

It wouldn’t surprise me any if the dems infiltrate COVID patients into the rally. I suspect that the dems will attempt to whip up a riot in Tulsa ahead of or during the rally. I hope that Tulsa, the state of OK, and the Secret Service are on top of the situation.

And people wonder why

Let me pile on the group of people that are calling BS on this.

Where was their concern whenCommies, Lefties, and Progs were destroying people livelihoods? Burning cop cars.

Where was their concern about the spread of Kung Flu when those same people are beating the hell out of cops and bystanders with bricks, two by fours, and sign posts?

Somebody put out the word to resist the start of the rallys, we don’t care how you do it.

Same old MSM disinformation. They can kiss my ass.

If they are concerned about older people being exposed to Kung Flu, tell them to stay home. I am sure that there is no lack of people who want to attend that are willing to work, even for free.

Pay the people who are older, fearful of being exposed. Good publicity for the Trump Campaign. 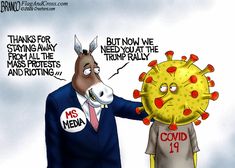