New York Sen. Hillary Clinton opened up both barrels on supporters of President Bush Monday night, saying she's "sick and tired" of the way the patriotism of Bush's critics has been questioned.

"I am sick and tired of people who say that if you debate and you disagree with this administration somehow you're not patriotic," a shrill-sounding Clinton shouted during her address to Connecticut's Jefferson Jackson Bailey dinner.

"We should stand up and say, we are Americans and we have a right to debate and disagree with any administration," she shrieked.

The non-presidential candidate, who's miles ahead of every other Democratic presidential hopeful in every poll that includes her name, zeroed in on the economy, saying that Bush had given the nation the worst economic policies since the Great Depression.

"In just two years, the country again faces hefty budget deficits," she said. "We are, unfortunately, reaping the bad consequences of a wrong economic policy. They have the most wrong-headed economic policies that we've seen since Herbert Hoover."

In an attempt to explain why the country wasn't saddled with the bread lines and street-corner apple salesman of the Hoover-era, Clinton said, "People know better than what they hear and what they see."

Read more on this subject in related Hot Topics:

TOPICS: Constitution/Conservatism; Crime/Corruption; Culture/Society; Foreign Affairs; Front Page News; Government; News/Current Events; Politics/Elections
KEYWORDS: clinton; critics; hillary; imsickandtired; of; patriotic Navigation: use the links below to view more comments.
first 1-20, 21-40, 41-60, 61-80 ... 141-150 next last
1 posted on 04/29/2003 6:50:16 AM PDT by TaRaRaBoomDeAyGoreLostToday!
[ Post Reply | Private Reply | View Replies]
To: All
The witch could only be 'silent' for so long. It is hard to tell now if this is her strategy to be the savior in 2004 and run for Prez, or if she decided to wait till 2008 so she is lettin it rip.
2 posted on 04/29/2003 6:52:10 AM PDT by TaRaRaBoomDeAyGoreLostToday!
[ Post Reply | Private Reply | To 1 | View Replies]
To: TaRaRaBoomDeAyGoreLostToday!
I am sick and tired of people who say that if you debate and you disagree with this administration somehow you're not patriotic

If you debated and you disagreed with the Clinton administration - Arkancide!

Unless you're part of a "vast right-wing conspiracy." Then you sit down and shut up.

5 posted on 04/29/2003 6:53:48 AM PDT by TheBigB (**FOX NEWS ALERT Tim Robbins trapped in well. Public: "So?" THIS HAS BEEN A FOX NEWS ALERT**)
[ Post Reply | Private Reply | To 1 | View Replies]
To: Living Free in NH
I noticed the reference in the article that she is not a Presidential candidate. I still say she will sneak in like a savior.
6 posted on 04/29/2003 6:54:29 AM PDT by TaRaRaBoomDeAyGoreLostToday!
[ Post Reply | Private Reply | To 3 | View Replies]
To: TaRaRaBoomDeAyGoreLostToday!
Actually, Hillary has been very careful not to criticize the Bush Administration over the war because she wants to be seen as a strong supporter of the military. She now critizes "those" (without identifying who those are) who claim it is unpatriotic to disagree with the administration. The use of "unpatriotic" in this context is to pander to the liberal base that opposed the war. She is trying to have it both ways. Also, she claims that the economy is the worst since the days of Hoover. Sounds alike like "the worst economy in fifty years" slogan of her husband. He was wrong and so is she. But, clearly she has an agenda. The only question is does it relate to 2004 or 2008?
7 posted on 04/29/2003 6:57:54 AM PDT by Pharlap
[ Post Reply | Private Reply | To 1 | View Replies]
To: TaRaRaBoomDeAyGoreLostToday!
She is correct on both counts. Hillary is sick, and Hillary is tired.
8 posted on 04/29/2003 6:58:11 AM PDT by Cultural Jihad
[ Post Reply | Private Reply | To 1 | View Replies]
Comment #9 Removed by Moderator

To: widowithfoursons
I can hear her now...my party is in such dire need of a Presidential candidate to bring back the Clinton years raving economy and benefits for the poor and help 'for the children" that they already made internet bumper stickers for me, well, Katie.... ya know, I don't want "to disappoint, nor waste these peoples time that produced my campaign slogan, so I will run for the sake of the people.

I wish the press would the she-monkey two question. "What words or actions, if any, would you deem unpatriotic? Do you think Congressman's McDermott's actions in Bagdhad were unpatriotic?"
11 posted on 04/29/2003 6:58:45 AM PDT by LibertyJihad
[ Post Reply | Private Reply | To 1 | View Replies]
To: TaRaRaBoomDeAyGoreLostToday!
"I am sick..."

Got that part right. 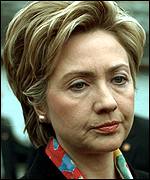 First, you have to assume he has intelligence. I know it's a stretch, what with him being a charity case selection in his entire education career, rather than an intellectual selection, but just try.
16 posted on 04/29/2003 7:03:51 AM PDT by mabelkitty
[ Post Reply | Private Reply | To 1 | View Replies]
To: TaRaRaBoomDeAyGoreLostToday!
New York Sen. Hillary Clinton opened up both barrels on supporters of President Bush Monday night, saying she's "sick and tired" of the way the patriotism of Bush's critics has been questioned.

Oh, put it back in your pants Hillary.

I'm sick and tired of this straw horse. NOBODY is questioning Bush's critics, at least publically.

"Has that clinton "legacy" made you feel safer yet?"

Lest Americans ever forget why the clintons, and all their enablers need to be hectored, hounded, and harried into silence, until "clintonese is only spoken in Hell," look here: