Not for commercial use. Solely to be used for the educational purposes of research and open discussion.


A FORMER colonel in Saddam Hussein's Fedayeen, one of Iraq's most brutal militias, has claimed that he trained with fighters from Osama Bin Laden's Al-Qaeda terrorist network in secret camps near Baghdad. The defector, who fled to Turkey three years ago, says that as long ago as 1997 and 1998, Islamic extremists were being taught how to use chemical and biological weapons.

Their instructors, he says, were from a military intelligence organisation known as Unit 999, which ran a six-month course for "foreigners" including the Iranian opposition organisation Mojahedin-e Khalq and the Turkish-Kurdish PKK rebel movement as well as Al-Qaeda.

Colonel "Abu Mohammed", whose real name is being withheld to protect him and his family near Ankara, says American officials who debriefed him in 1999 showed little interest in his information. If true, however, his story may acquire fresh significance as America seeks evidence of a link between Saddam Hussein and Bin Laden that could help it to justify an attack on Baghdad. In recent months several defectors have spoken of secret training camps in Iraq where Arabs from all over the Middle East have been trained in sabotage techniques by Mukhabarat (intelligence) instructors.

Mohammed said he was recruited into Saddam's Fedayeen in 1997 and trained at two secret facilities - at Salman Pak, southeast of Baghdad, and at the Unit 999 camp, northwest of the Iraqi capital. His first encounter with Bin Laden's fighters occurred at Salman Pak when he was on an induction course to become a Fedayeen officer, he said.

"We were met by Colonel Jamil Kamil, the camp manager, and Major Ali Hawas. I noticed that a lot of people were queueing for food.

(The major) said to me: 'You'll have nothing to do with these people. They are Osama Bin Laden's group and the PKK and the Mojahedin-e Khalq.

"They train for three months at Unit 999 and another three at the Mukhabarat school in Salman Pak. So there are two camps where they train Bin Laden's people."

Mohammed said he had attended another training course at Salman Pak and Unit 999 a year later, spending 15 days at each facility. Here, once again, he encountered Al-Qaeda fighters undergoing specialised sabotage training.

"There was training in the use of biological and chemical weapons there but they were not Iraqis doing it - only foreigners," he said.

"They were trained to put materials into small containers and study the biological effects. In the training areas there is a field especially for weapons of mass destruction. Here, experts hold lectures and conduct biological experiments - theoretical experiments, of course - on how to place explosives or how to pollute specific areas, water and public places and ventilation systems as well as power stations. They had maps of the USA, Britain, Turkey, Iran and Saudi Arabia."

Mohammed's claims illustrate the challenge American officials face in determining the quality of information from defectors whose hatred of the Iraqi regime may lead them to embellish their accounts.

The intelligence services have struggled to find convincing evidence of links between Iraq and Al-Qaeda. Saddam's secular regime has little in common with Bin Laden except for a shared hatred of America and Israel.

However, Abbas al-Janabi, who spent 15 years as personal assistant to Uday, Saddam's son, before fleeing to the West in 1998 and who is regarded as one of the most reliable senior defectors, is convinced that there is a connection between Bin Laden and Saddam. Last week he said he had learnt that Iraqi officials had visited Afghanistan and Sudan to strengthen ties with Al-Qaeda. He also knew of a top secret centre near Baghdad where "foreigners" trained with Iraqis.

"This was a sort of factory for turning out instructors," Janabi said. "They trained both Iraqis and foreign nationals. Suicide squads were trained in sabotage techniques using weapons of mass destruction. They were well paid, well fed and their families well looked after." Janabi predicted that in the event of war with the West, Saddam would deploy bio-weapons including smallpox.

The training described by Mohammed and Jannabi raises the possibility that Iraq has been passing on expertise learnt from the East Germans during the cold war. At Massow, a camp just south of Berlin, secret police instructors taught Iraqis how to attack civilian targets using chemical and biological warfare agents.

A former Stasi lieutenant-colonel said: "The courses emphasised chemical weapons which attack the nervous system. They were also taught how to deploy bacteriological weapons - influenza, anthrax and yellow fever."

In a Kurdish prison in Sulaimaniya, northern Iraq, further corroboration of claims that Saddam and Bin Laden have co-operated has come from an Iraqi who has admitted working for the Mukhabarat. He said that Bin Laden's second-in-command, the Egyptian doctor Ayman al-Zawahiri, had met Saddam in Baghdad in 1992. "I was one of the people responsible for his protection," he claimed.

The prisoner seemed well informed about Unit 999. Men attached to Al-Qaeda had been dispatched, from there to Afghanistan, Lebanon, Sudan and to a base in Somalia from where they were reassigned, he said. Some fighters trained by the Iraqis had joined Al-Ansar Al-Islam, the Allies of Islam, a militant Islamic group based in eastern Kurdistan.

Acts of terror by this group are beginning to pose a serious threat to stability in the area. Al-Ansar is blamed for trying to assassinate Dr Barham Salih, prime minister of the Kurdish regional government, in April. Two would-be assassins were killed and a third was captured. During the subsequent investigation the captive reportedly admitted that Al-Qaeda had recruited him in Jordan.

There is also growing evidence that Bin Laden's supporters are crossing through Iran from Afghanistan to join AlAnsar. Inhabitants of Halabja, the town gassed by the Iraqi army in 1988, live in fear of Al-Ansar reprisals against anyone considered pro-western.

With the prospect of American intervention in northern Iraq looming, Al-Ansar could prove dangerous. Its objective is to overthrow the pro-western Kurdish regional governments and to set up an Islamic state modelled on the Taliban's rule in Afghanistan.

If even half of what was claimed in this documentary is true, we should start bombing Iraq without further discussion. One defector even claimed Osama bin Laden himself visited Salman Pak in around 1998, accompnaied by Saddam's son Uday.

The pool is still open and predictions are still being accepted!

Who better to learn from than someone who has already used chemical weapons in combat situations?

Yes -- but do not forget that with terrorists as their foot soldiers, Iraq may have expanded their capability to choose the battleground. 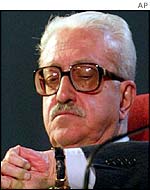 Question:
Who is this, is it:
(a) Tariq Aziz , foreign minister of Iraq, or
(b) David White who played Larry Tate in "Bewitched".

Trivia: Did you know that actor David White's son was killed in the Pan-Am bombing over Lockerbie, Scotland?
16 posted on 09/03/2002 7:57:19 PM PDT by Mohammed El-Shahawi
[ Post Reply | Private Reply | To 1 | View Replies]
To: Wallaby
Looks like the place needs a good sterilization. The device shown below is the only thing able to do that on such a scale. Might need something a bit bigger, this is only a 350 KT device, but we could use something like the 11 MT device below. 17 posted on 09/07/2002 7:52:29 PM PDT by El Gato
[ Post Reply | Private Reply | To 15 | View Replies]
To: Wallaby
Mohammed's claims illustrate the challenge American officials face in determining the quality of information from defectors whose hatred of the Iraqi regime may lead them to embellish their accounts.

Jan Karski's claims illustrate the challenge American officials face in determining the quality of information from jews whose hatred of the Nazi regime may lead them to embellish their accounts.

Interesting that Mohammed was debriefed in 1999 and this was of no interest. Eh X42?