BROCKTON, Mass. — A woman accused of stabbing a Brockton mother to death during a road-rage incident on Friday afternoon was ordered held without bail Monday.

At an arraignment session in Brockton District Court, the defense attorney for Jacqueline Mendes, 32, of Fall River, claimed his client acted in self-defense after the woman she later stabbed, Jennifer Landry, approached his client’s car with a knife of her own.

The violence allegedly stemmed from a verbal argument about driving, though police do not believe a collision occurred.

An illegal would have been out on bail with a promise to show up for a court date.

Ms. Mendez could have been a Mother, too. Mom’s kill people too.

3 posted on 07/02/2019 6:40:01 PM PDT by Freedom4US
[ Post Reply | Private Reply | To 1 | View Replies]
To: ConservativeStatement
Having lived in Massachusetts for a number of years, I can tell you that have probably the worst and angriest drivers in the country. I actually find the NYC area a more pleasant driving experience!

One time I had this road rage guy follow me for miles. Evidently he thought I purposely cut him off or something. Anyway, I look in my rear view mirror and the guy has his middle finger out and leaning on the horn. I pull over to let him by and he pulls over too. So I just pull back out on the road to get away from him. I take all sorts of turns trying to ditch him and he remains on my tail with an angry grimace on his face. I realize he's following me to see where I live so I just start heading over to the police station. As soon as I made the turn into the police station, he blasts his horn one more time and screams in rage. I had to basically stay in the police parking lot for about 15 minutes before I decided it was safe to drive away.

There are some real maniacs up there.

We were driving our daughter to camp in Texas and were on I-20 in Louisiana. There was road construction, hubby got tired, daughter was 16 and wanted to drive while her dad took a nap in the back seat. She stuck to the speed limit. After quite a while, some skinny bearded guy in an older compact started tailgating us. The only occupants of our jeep he could see were my daughter and me. Two women. So we woke my husband up and he said to pull off the next exit that had a large gas station so we did. He whipped in behind us and my husband got out of the back seat. He took off like a scared rabbit. :-) Still makes me smile lol

I carry a loaded weapon in my vehicle in case of something like this happening. My solid personal rule is NOT to engage any of these ass wipes because there can only be a dangerous escalation. I’ll let him come up to my vehicle; then he’ll have a sight he wasn’t expecting, one that, if he puts me in reasonable fear of death or great bodily harm, could result in his death. 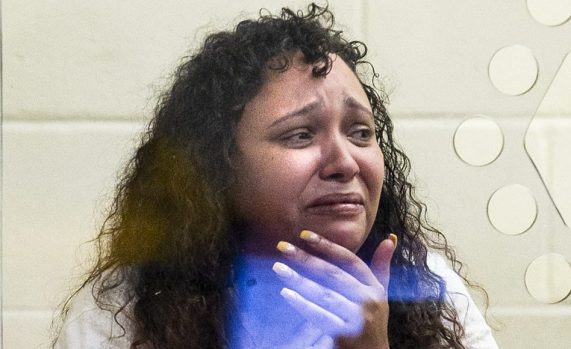 She wil still get a pussy pass.

People are still dumb enough to believe insanity “defenses” “because the criminal is female”.

But more recently, in the past year or so, I've had several occasions to drive in Manhattan, and I can tell you that the drivers there are much worse than they were 10 years ago.

The car horns alone are enough to drive anyone crazy - even us Boston drivers.

Oh well, at least we still the best fiddle players this side of Hell: The Devil Came Up to Boston (video: 3:43)

She looks like she’s having second thoughts about her decision.

I had a guy get in front of and suddenly slam his brakes because he was angry at me.

I was driving in Boston once with a friend. While waiting for a light two women got into it. It was “ F... you” and “No, F...you” back and forth for the entire long light.
For someone who was not a Bostonian it was a real eye opener. Or perhaps an ear opener.

A bit late for remorse, eh?

I cut the duck boat off once downtown. The driver had a microphone. He just said and there folks is a Boston driver. Chinese tourists were snapping pictures. Eat my dust and duck off. Lol