New Jersey’s response to the coronavirus inside nursing homes was “an unmitigated failure” that led to “preventable deaths,” a group of anonymous state health department employees charged in a letter to lawmakers Monday. Moreover, Gov. Phil Murphy’s administration “is making things up as they proceed” in order to reopen the economy, the writers also allege.

The letter, sent to state Senate President Stephen Sweeney, D-Gloucester, and Senate Minority Leader Tom Kean Jr., R-Union and obtained by NJ Advance Media, also calls for the resignation of state Health Commissioner Judith Persichilli and an investigation into other top administration officials who they said have mishandled the state’s response.

NJ Advance Media knows the identity of three of the employees, who asked not to be named because of fears of retaliation. They say other staffers joined them, but they would not disclose who they are, but they have been involved in internal discussions within the health department.

The letter lays out a searing indictment of the state’s handling of the public health crisis, from its lack of transparency on how decisions are being made in reopening the economy, to the failure to devote enough testing and personal protective equipment to protect the most vulnerable — the elderly in long-term care facilities. It claimed Murphy’s administration hired consultants to complete tasks the state Health Department could not handle because of a lack of leadership.

The writers allege that since there was not enough personal protective equipment staffers were pressured to relax minimum standards to allow testing to proceed in nursing homes, psychiatric hospitals, centers for the developmentally disabled, and prisons.

IMAGES OF LETTER BELOW.

TOPICS: Miscellaneous
KEYWORDS: murder; pandemic
It's thinly veiled murder. 5 Democratic governors knowingly forced Covid-19 patients into elderly care facilities against medical advice and despite the president's medical ships and field hospitals, not to mention local hospital availability. Those Dem Governors/mayors WANTED death to drive up the number of fatalities and force mail in voting so they could steal the election. Yes, that IS what they are doing.

Here's a recent tweet linking the article and the letter written annonymously by the health NJ. department below. If you find the letter difficult to read, you may prefer reading it at the bottom of the linked linked above. 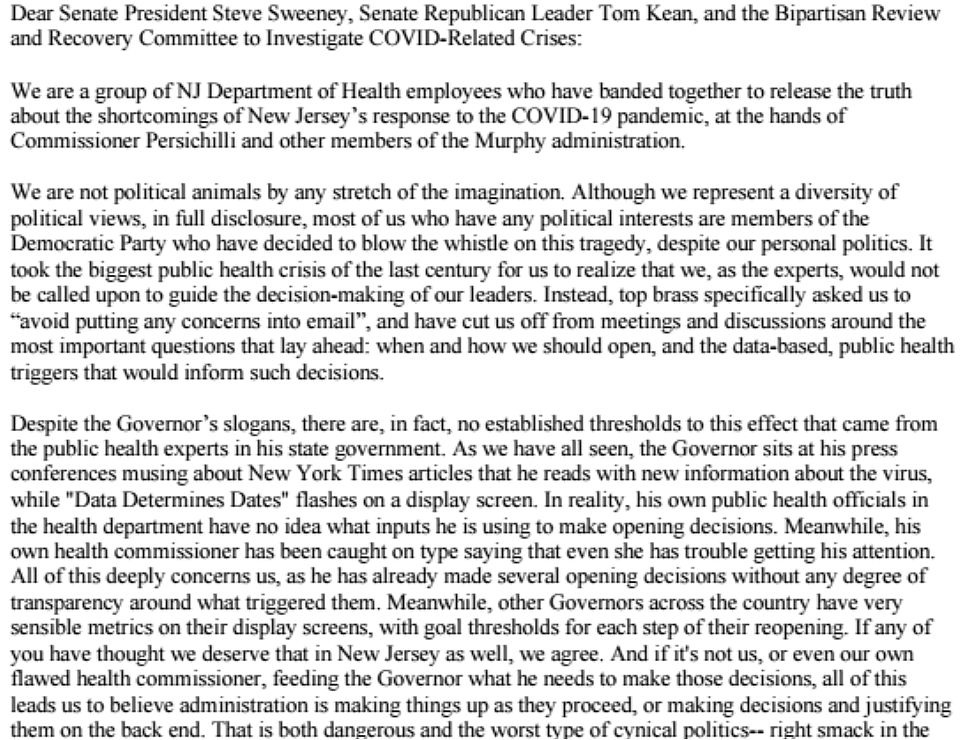 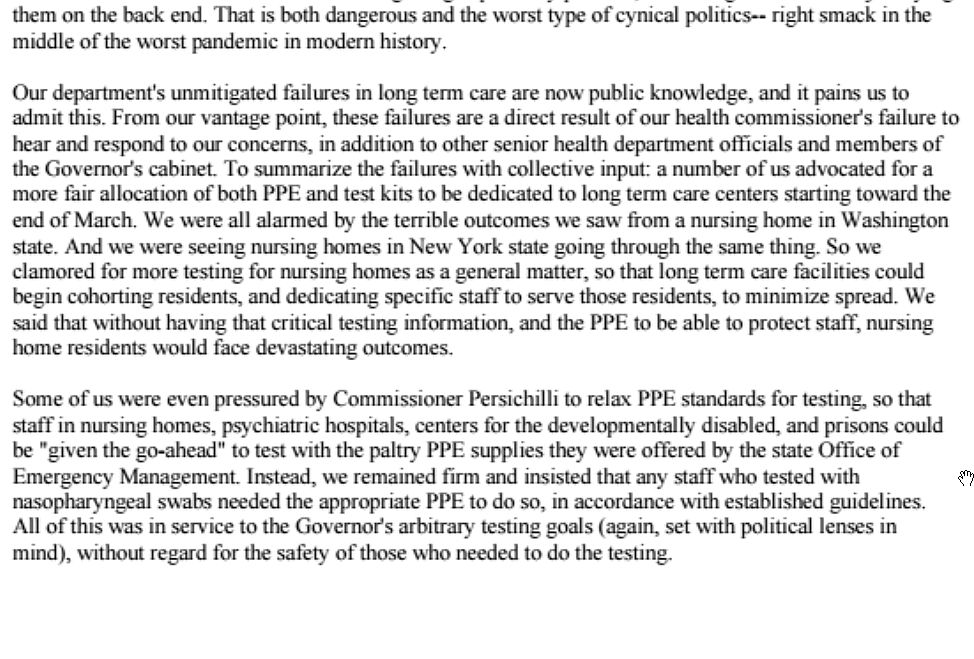 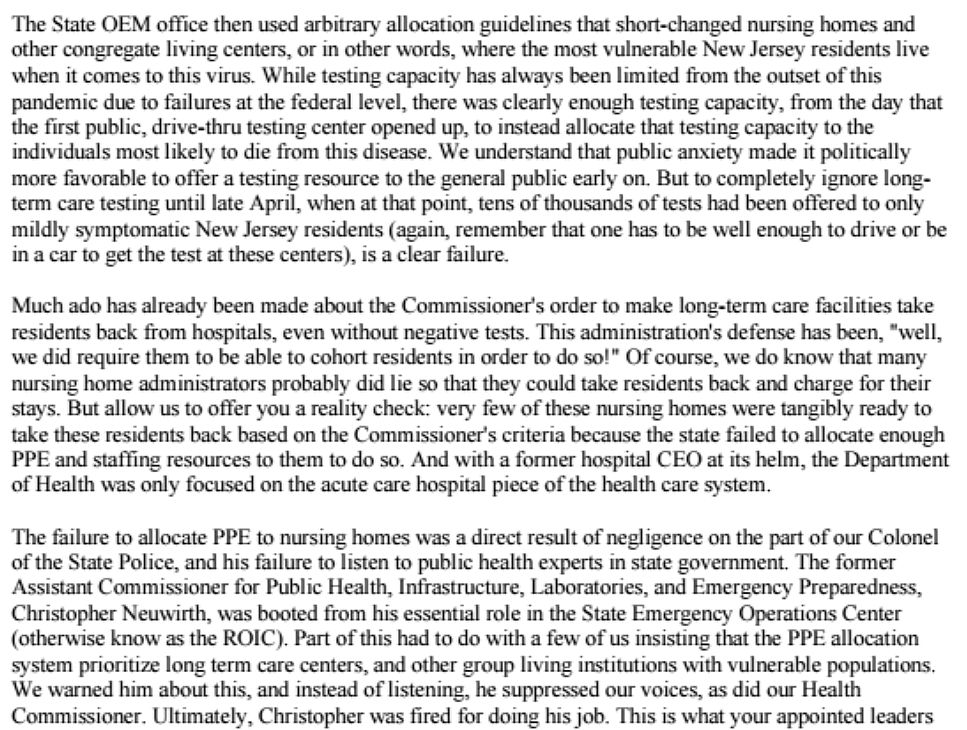 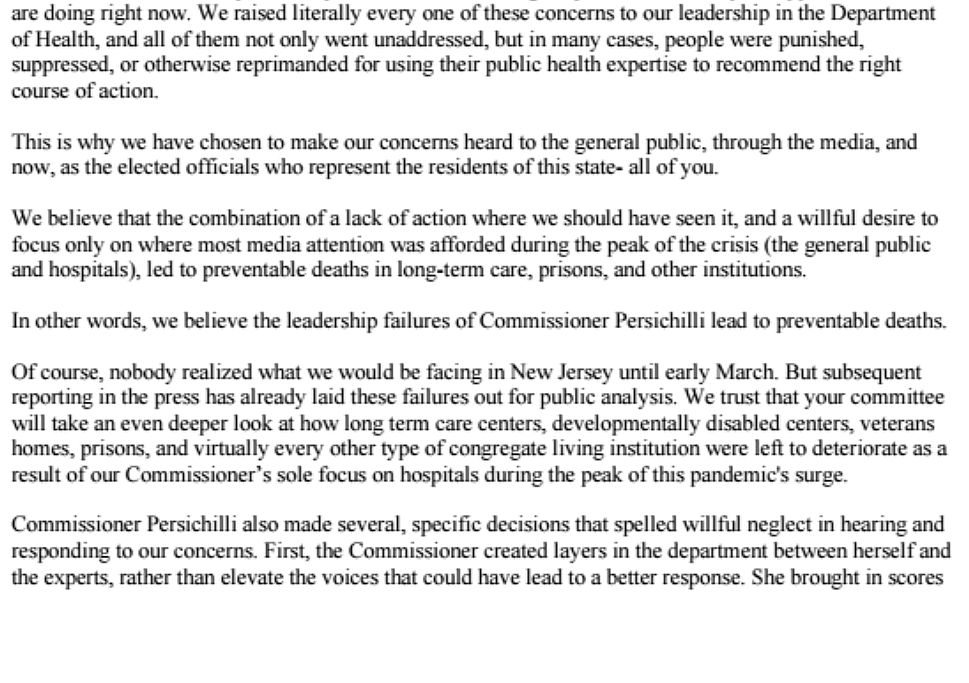 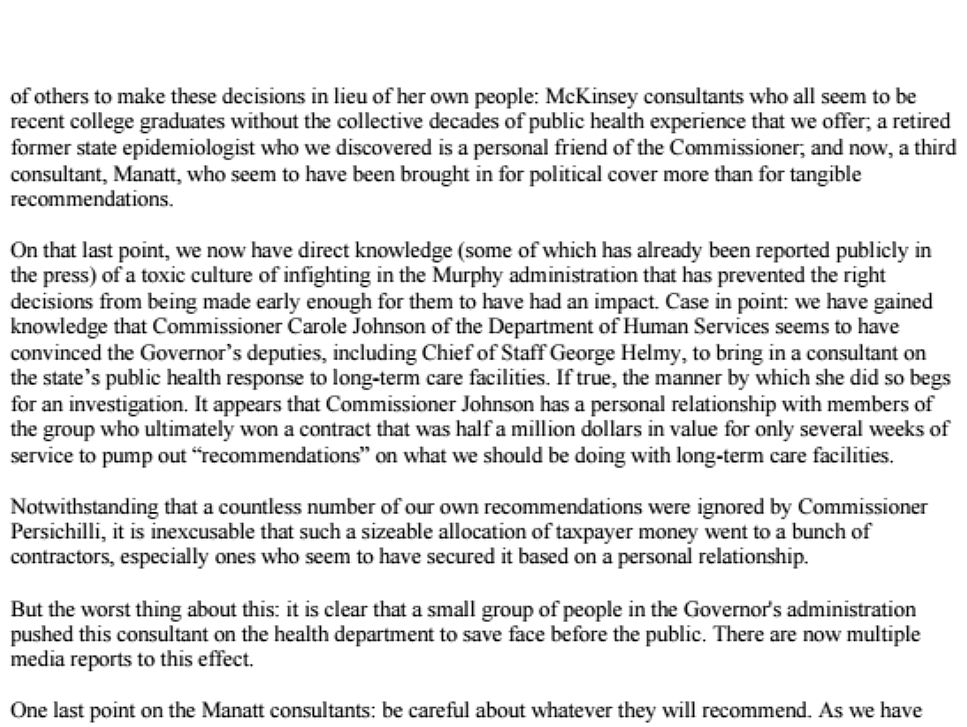 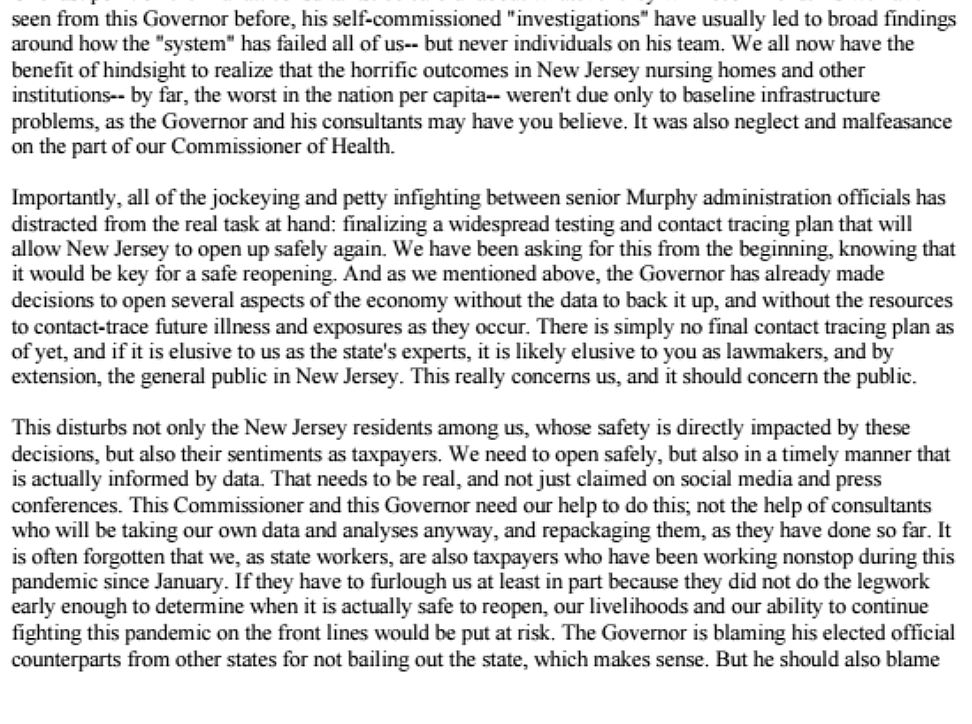 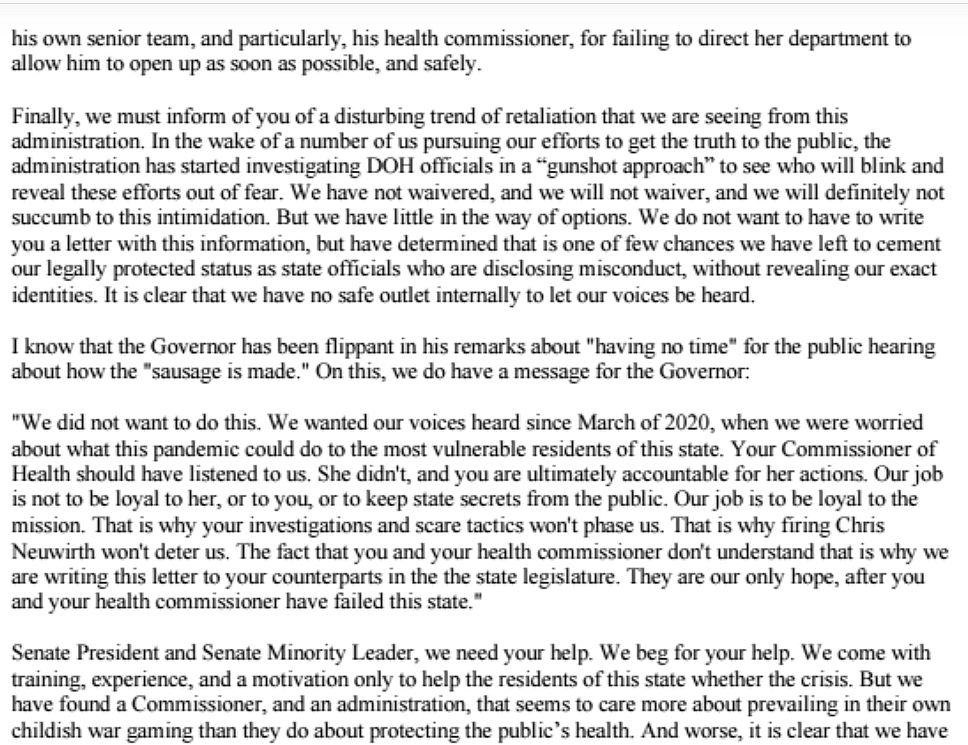 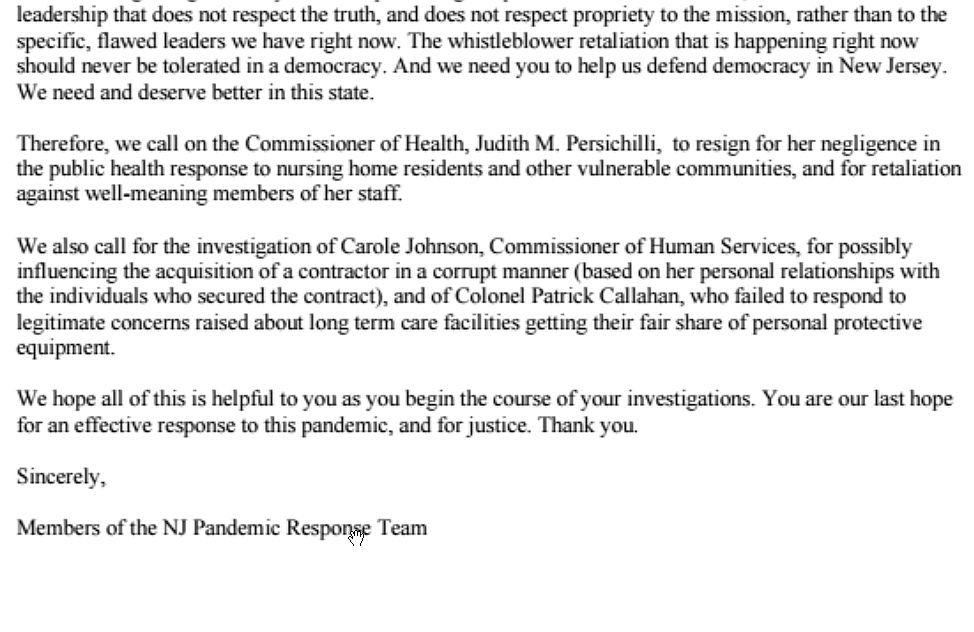 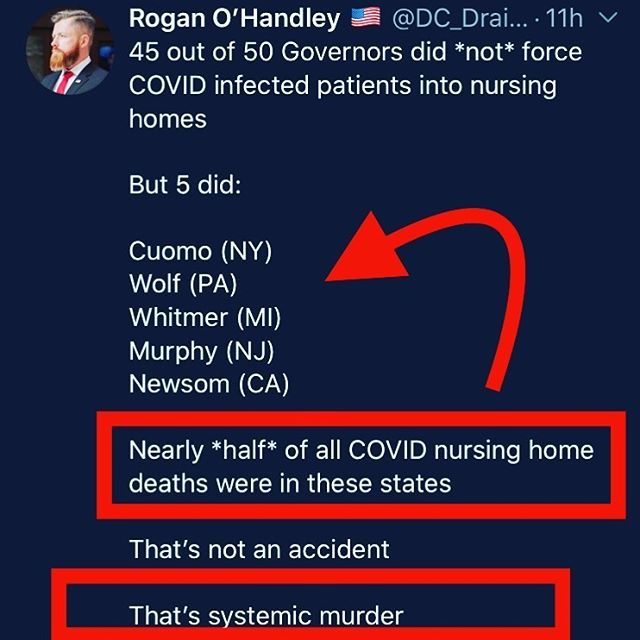 2 posted on 06/25/2020 2:16:10 PM PDT by ransomnote (IN GOD WE TRUST)
[ Post Reply | Private Reply | To 1 | View Replies]
To: ransomnote
There was never a need to force Covid-19 patients into elderly care facilities, unless you're mayor of DC and want to drive up Covid-19 deaths to stoke fear and justify mail-in voting.

"New York City Mayor Bill de Blasio (D) announced the construction of the multimillion-dollar field hospital at the end of March — the day after the USNS Comfort docked at Manhattan’s Pier 90.

“They are going to set it up rapidly and we’re then going to go to the next site, the next site, the next site to meet our goal,” de Blasio said, detailing the 670-bed plus site at the Brooklyn Cruise Terminal in Red Hook. He also announced another overflow facility at the Billie Jean King Tennis Center in Flushing. That 350-bed facility only saw 79 patients, according to THE CITY. However, the Red Hook facility never saw a single patient, and both locations ended up costing over $40 million combined."

“We’re not going to dignify anonymous allegations with a response.”

If this had anything to do with making Trump look bad, you damn well better believe the “seriousness of the allegations” would supersede any questioning of the source(s) from which it came.

Yet NJ’s count is below 1, which means declining infection rate.

Was it a “bad failure” or a successful economic ploy?

and lower costs while receiving tax money rewards for those deaths.