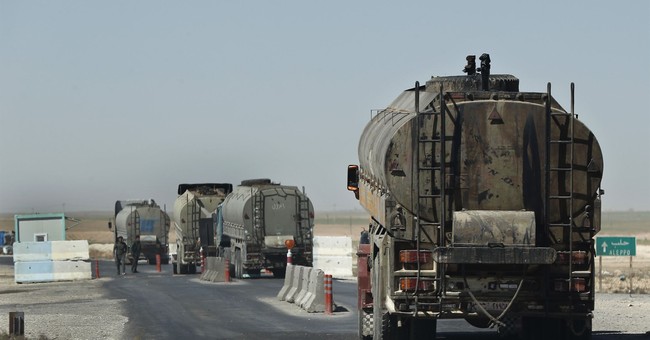 "Let someone else fight over this long blood-stained sand," said President Donald Trump in an impassioned defense of his decision to cut ties to the Syrian Kurds, withdraw and end these "endless wars."

Are our troops in Syria, then, on their way home? Well, not exactly.

Those leaving northern Syria went into Iraq. Other U.S. soldiers will stay in Syria to guard oil wells that we and the Kurds captured in the war with ISIS. Another 150 U.S. troops will remain in al-Tanf to guard Syria's border with Iraq, at the request of Jordan and Israel.

And 2,000 more U.S. troops are being sent to Saudi Arabia to help defend the kingdom from Iran, which raises a question: Are we coming or going?

In his conflicting statements and actions, Trump seemingly seeks to mollify both sides of our national quarrel:

Is America still the world's last superpower with global policing obligations? Or should we shuck off this imperial role and make America, again, in Jeane Kirkpatrick's phrase, "a normal country in a normal time"?

In Middle America, anti-interventionism has carried the day. As Trump says, no declaration at his rallies is more wildly welcomed than his pledge to end our Middle East wars and bring the troops home.

But in this imperial capital, the voice of the interventionist yet prevails. The media, the foreign policy elite, the think tanks, the ethnic lobbies, the Pentagon, the State Department, Capitol Hill, are almost all interventionist, opposed to Trump's abandonment of the Kurds. Rand Paul may echo Middle America, but Lindsey Graham speaks for the Republican establishment.

et the evidence seems compelling that anti-interventionism is where the country is at, and the Congress knows it.

For though the denunciations of Trump's pullout from Syria have not ceased, one detects no campaign on Capitol Hill to authorize sending U.S. troops back to Syria, in whatever numbers are needed, to enable the Kurds to keep control of their occupied quadrant of that country.

Love of the Kurds, so audible on the Hill, does not go that far.

While surely loud, the neocons and liberal interventionists who drown out dissent in D.C. appear to lack the courage of their New World Order convictions.

In 1940-41, the anti-interventionists of "America First" succeeded in keeping us out of the world war (after Hitler and Stalin invaded Poland in September of 1939 and Britain and France went to war). Pearl Harbor united the nation, but not until Dec. 7, 1941, two years later -- when America First folded its tents and enlisted.

Today, because both sides of our foreign policy quarrel have powerful constituencies, we have paralysis anew, reflected in policy.

We have enough troops in Afghanistan to prevent the Taliban from overrunning Kabul and the big cities, but not enough to win the war.

In Iraq, which we invaded in 2003 to oust Saddam Hussein and install a democracy, we brought to power the Shia and their Iranian sponsors. Now we battle Iran for political influence in Baghdad.

Across the Middle East, we have enough troops, planes and ships to prevent our expulsion, but not enough to win the wars from Syria to Yemen to Afghanistan.

Bahrain in the Persian Gulf is the home base of the U.S. Fifth Fleet. We have 13,000 troops and a major air base at Al Udeid in Qatar. U.S. Army Central Command and 13,000 U.S. troops are in Kuwait. Trump has sent more troops to Saudi Arabia, but it was the "infidel" troops' presence on sacred Saudi soil that was among the reasons Osama bin Laden launched 9/11.

To the question, "Are we going deeper into the Middle East or coming out?" the answer is almost surely the latter.

Among the candidates who could be president in 2021 -- Trump, Joe Biden, Elizabeth Warren, Bernie Sanders -- none is an interventionist of the Lindsey Graham school. Three are anti-interventionist and anti-war, which may help explain why Democrats are taking a second look at Hillary Clinton.

According to polls, Iran is first among the nations that Americans regard as an enemy. Still, there is no stomach for war with Iran. When Trump declined to order a strike on Iran -- after an air and cruise missile attack shut down half of Saudi oil production -- Americans, by their silent acquiescence, seemed to support our staying out.

Yet if there is no stomach in Middle America for war with Iran and a manifest desire to pull the troops out and come home, there is ferocious establishment resistance to any withdrawal of U.S. forces. This has bedeviled Trump through the three years of his presidency.

Again, it seems a stalemate is in the cards -- until there is some new explosion in the Mideast, after which the final withdrawal for America will begin, as it did for the exhausted British and French empires after World War II.

That we are leaving the Middle East seems certain. Only the departure date is as yet undetermined.

Although I wasn't even born until a decade after the war ended, I have a letter given to me by my Aunt from my father who wrote her in November of 1941 detailing all the reasons that America should not get involved in a European War.

Two days after Pearl Harbor, he caught a ride off the reservation to go to town to enlist in the Naval Air Force. They asked him to come back a month later because they weren't prepared to process all the enlistments.

He did and they did. Stories similar to his number in the millions. Pearl Harbor changed everything.

Good related book “The Absent Superpower” outlines why this is the case.