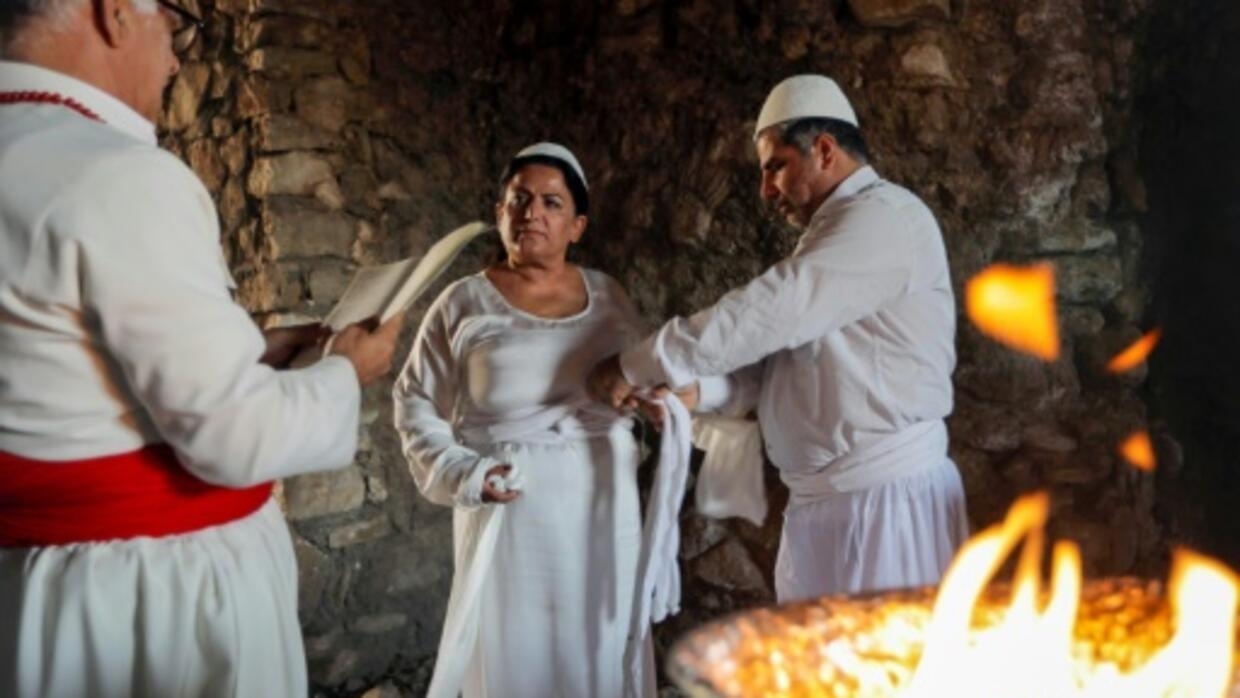 In a ceremony at an ancient, ruined temple in northern Iraq, Faiza Fuad joined a growing number of Kurds who are leaving Islam to embrace the faith of their ancestors -- Zoroastrianism.

Years of violence by the Islamic State jihadis have left many disillusioned with Islam, while a much longer history of state oppression has pushed some in Iraq's autonomous Kurdish region to see the millennia-old religion as a way of reasserting their identity.

"After Kurds witnessed the brutality of IS, many started to rethink their faith," said Asrawan Qadrok, the faith's top priest in Iraq's autonomous Kurdish region.

During Fuad's conversion ritual in Darbandikhan, near the Iranian border, a high priest and his assistants wore white clothes representing purity and recited verses from the Zoroastrian holy book, the Avesta.

They knotted a cord three times around Fuad's waist to symbolise the faith's core values of good words, good thoughts and good deeds.

The newcomer raised her hand and swore to abide by those three values and to protect nature, respecting water, air, fire, earth, animals and humans.

She said she had been studying Zoroastrianism for a long time and was drawn to its philosophy, which "makes life easy".

"It is all about wisdom and philosophy. It serves mankind and nature," she said.

Zoroastrianism was founded in ancient Iran some 3,500 years ago, gaining followers as far afield as India.

It was the official religion of the powerful Persian empire for a thousand years, but the assassination of the final Zoroastrian king in 650 and the rise of Islam sent it into a long demise.

However the faith did survive -- often in the face of severe persecution ...

"We need to use our ancient religion to revive our identity and build the nation," he said. 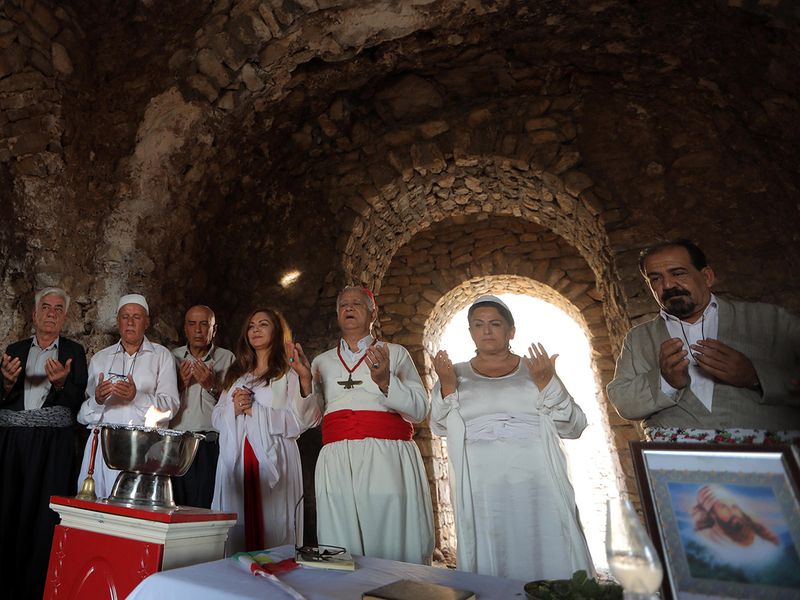 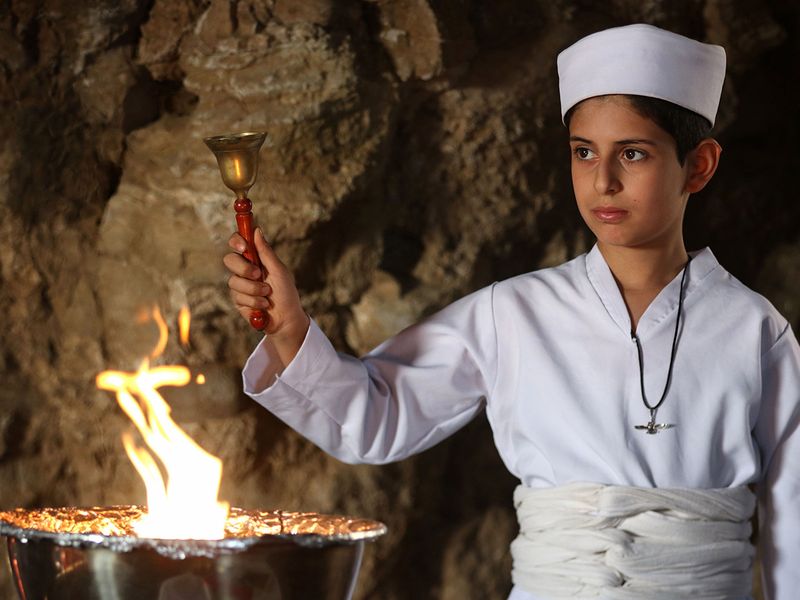 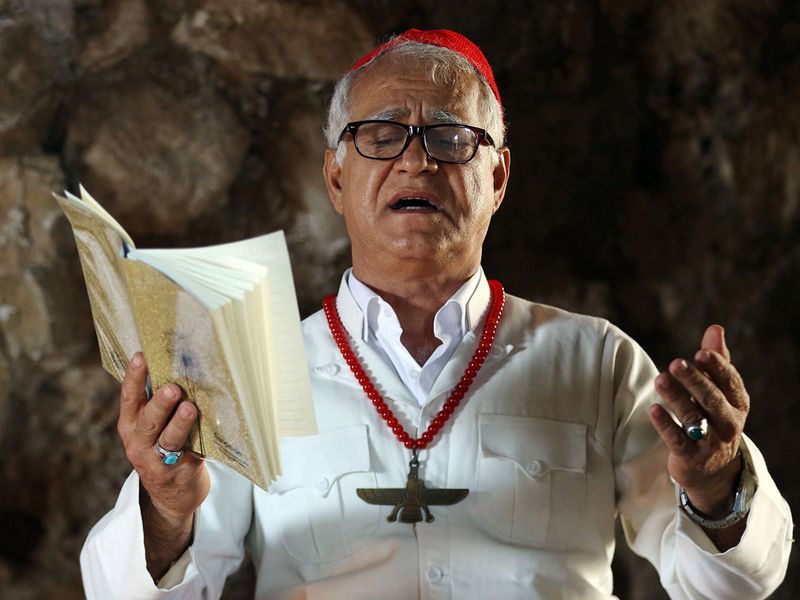 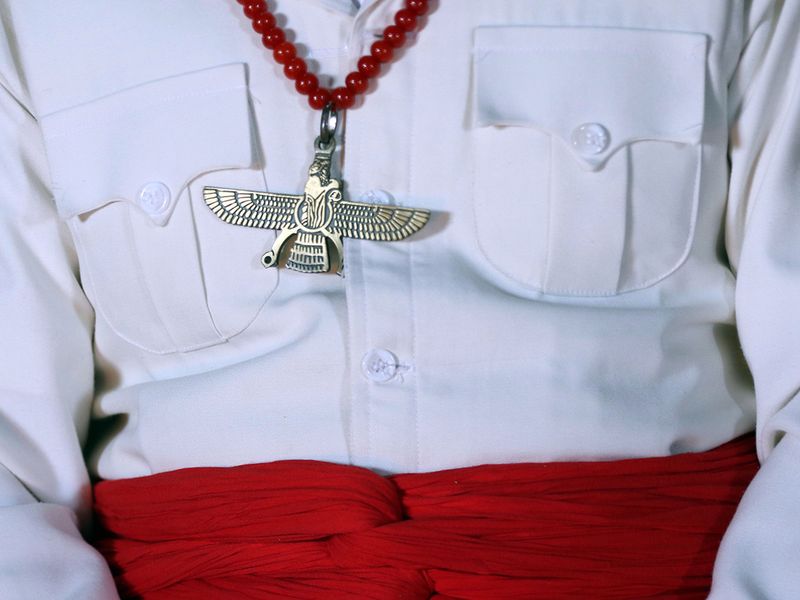 Then the question was raised, "Where did they come from?" And he invented a third creator god.

These heathens want a religion which appeals specifically to their ethnicity. Mohammed, the child rapist and murderer, felt that the Jews had Moses and whites had Christ but the Arabs had nobody. So he invented Islam.

And, if he hadn't shown up and been all militaristic about his religion, Zoastrianism would have been as big as Islam.

Pity they just don't have the intellectual capacity to understand that Christ is God to all men (if those men have the humility to admit such).

Matt 28:19: Go ye therefore, and teach all nations, baptizing them in the name of the Father, and of the Son, and of the Holy Ghost:

Might want to do a little nore research, besides many of the concepts of Christianity being very similar, Zoroastrianism predates it by a almost a couple millennia.

There are those who think that Abraham got some ideas from Zoroastrianism when he was setting up Judaism.

The Parsi of India are Zoroastrians.

If it works for them and is a cause for good, there is no harm.

They have as much right to their choice as you do with yours.

The founder of Mazda Motors was actually named Matsuda but nameed the company after Ahoura Mazda the good god in Zoroastrianism because of its mystical traditions.

Their dualistic theism actually solves one of the problems with monotheistic religions which must rationalize why a benevolent God would allow evil to exist. There are a lost of crossover beliefs in Zoroastrianism or Mazdaism with Hinduism which makes it similar to Buddhism in some ways.

Richard Strauss wrote “Thus Spoke Zarathrustra” which was inspired by the novel by Friedrich Nietzsche and it became the iconic theme music for the Kubrick movie, “2001: A Space Odyssey”

Many of the mythological epics in Western literature like Tolkien’s “Lord of the Rings” and even “Star Wars” are based on Zoroastrian myths of epic battles between good and evil forces that must test the resolve of the young hero through many trials.

The Indian industrial giant company Tata Motors was founded by a Zoroastrian family that maintains control to this day.

Their beliefs promote balance and harmony with nature and they believe that burying or cremating bodies actually pollutes the world. Instead, they build funeral towers where they lay out corpses so that vultures can eat them.

Zoroastrianism. the true non-Jewish monotheistic religion of the Middle East. When Mohammed Ali, the old sun-crazed sand hermit of Arabia was drawing up his battle plans and “new prophecies” of the Koran, he drew heavily on elements of Judaism, Christianity and Zoroastrianism for his theology, but discarding some very important parts. Upon completing his tome, he promptly forbade any of his followers from ever again referring to or quoting any of the older religious in any of their interpretations of the meanings of various passages of the Koran.

Islam is more a group of sects and cults than it is a religion in the sense understood by most of the rest of the world. They adopted as their model for Allah, the Zoroastrian supernatural figure, Ahriman.

This destructive spirit was widely adopted in many of the localized religions that sprang up like weeds throughout the Middle East, and is reflected in tales like Ba’al, Moloch, Dagon, and others, where the governing spirit is malevolent and demanded great sacrifices by their followers.

All very characteristic of how radical Islamic jihad is practiced today.

They were there at the beginning

From old Persian language, a priest of Zarathustra (Zoroaster). The Bible gives us the direction, East and the legend states that the wise men were from Persia (Iran) - Balthasar, Melchior, Caspar - thus being priests of Zarathustra religion, the mages. Obviously the pilgrimage had some religious significance for these men, otherwise they would not have taken the trouble and risk of travelling so far. But what was it? An astrological phenomenon, the Star?

Is the Christian belief of Lucifer, Michael and the Father all that much different than a God of evil, a God of good and an all powerful creator God?

Also, in Iran, according to the country's official census, there were 25,271 Zoroastrians within the country as of 2011.

Of course, muslim apostates can be killed with impunity by followers of the religion of peace.

16 posted on 11/05/2019 6:52:22 AM PST by jdsteel (Americans are Dreamers too!!!)
[ Post Reply | Private Reply | To 1 | View Replies]
To: jdsteel
Where do you people come from? And why do you insist upon infesting FR? You're seriously going to hold up an AIDS infected fag, which disease killed him, as any kind of example?

This place has degenerated something terrible. People like you. The addicts/libertarians. Etc.

“Might want to do a little nore research, besides many of the concepts of Christianity being very similar, Zoroastrianism predates it by a almost a couple millennia.”

Well, actually probably only by 650 years, and “many of the concepts of Christianity” are identical to the concepts of the Old Testament, which are thousands of years older than Zoroastrianism. Zarathustra was just a guy who allegedly received a direct revelation from an “angel of light”, just like Mohammed or Joseph Smith, and founded a cult with a twisted version of the truth to lead people away from God.

“Many of the mythological epics in Western literature like Tolkien’s “Lord of the Rings” and even “Star Wars” are based on Zoroastrian myths of epic battles between good and evil forces that must test the resolve of the young hero through many trials.”

Bull! Tolkien was a Roman Catholic who was an expert in language. His son became a priest. He was greatly influenced by World War I and among the Inklings, he attempted to convert CS Lewis.