To hear college students and corporate consumer-product commercials tell it, gender fluidity is so normal, popular even, that they’re simply communicating these ideas as a way to reflect the new progressivism in America.

Only that’s not exactly the case. Their ideas aren’t at all in sync with the rest of the country.

Still, that doesn’t stop college students from talking about the “infinite” number of genders, or corporations from selling Sprite with a commercial about transgenderism and breast-binding to boot, minus any mention of the soft drink itself.

A June 2019 Gallup poll reported Americans greatly overestimate the size of the gay and transgender population in the United States. The reason seems apparent: LGBT-perpetuated concepts of gender fluidity are ubiquitous, even sensationalized, within higher education and in ad campaigns for consumer products.

In a video PragerU.com produced, Will Witt went to the University of California at Berkeley and asked a number of college students, both men and women, how many genders exist. Answers ranged from “infinite” and “like, five or six, maybe,” to “gender is a construct that’s made up” and “like, 72-plus or something.”

While most students were unable to name more than a half-dozen “genders,” all of the students Witt’s video clip showed sounded absolutely sure there were multiple genders.

Most of the rest of America disagrees.

More than half of the adults in a 2017 Pew Research poll said they think sex is assigned at birth: 80% of respondents who lean Republican think one’s sex is either male or female, while 34% who lean Democratic do.

From the time the first sperm and egg combine and then divide you have a sex. It is either male or female.

If the guys on our side are not willing to promote this biological fact then we are going to be fighting a losing battle on this.

Pre trans advertising is advertising that appeals to the stupidest buyers.
The most manipulatable.
The ones most desirable to advertisers!

If I see a trans commercial, I will never use that product again.

The whole ‘trans’ thing is very popular with students because that’s what they’re being taught. Their kids will be taught the same thing. The stats today are what they are because folks are old enough to have escaped the LBGT? brain washing.

The solution to this is to stop teaching the LBGTPWE mind set. And how do we do that?

See you are posting common sense! 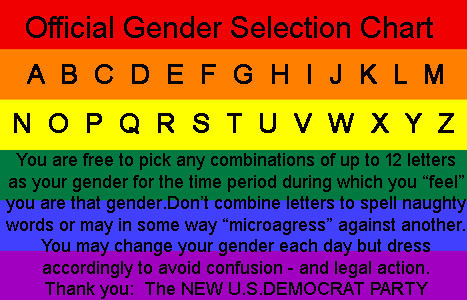 I agree Marlowe. I try also to take note of those pushing gay couples in their advertising as I did with the Gillette add. If supposed conservatives just shrug their shoulders and don’t react then this sort of advertising will persist.

It doesn’t, but the vile freaks will push it on us until it is.

Sex is assigned at birth, and it is barbaric to require people to undergo painful and dangerous surgeries that render the victim sterile in some sort of a bid to “fit in” with some sort of collective idea. This is probably just more of the globalism project that is crashing and burning.

The liberal progressive rats in government and their gender groups are fostering hate by people who would normally not care or be indifferent about this but are being forced into accepting it or we will lock you up, fine you, chastise you publically or throw you in jail.
a major one for me:

Allowing males into female bathrooms and locker rooms, is poking the tiger in the cage and absolutely despicable

I agree. I don't know whether it's carelessness, poor writing skill, or what, but when basic information is incorrect, it's hard to progress to moral or ethical analysis.

One example is that many people think it's cute to use the pronoun "it" regarding a person who claims "transgender" or some other variant. It's not cute: it's false. The person is a "he" or "she," and it never changes, from conception to death.

I have also noticed, most recently in articles about the James Younger situation in Texas, that there is an emphasis on genitalia as the critical factor in maleness or femaleness. That is also false. Every single cell of the body is marked with XX or XY that determines one's sex.

As HTB was just observing above, if we can't get that one basic thing correct - sex is biologically established at conception, and it can be observed long before birth - then we're playing into the hands of those who are intentionally obfuscating incredible basic science for nefarious purposes.

I wonder how people can support sex-selective abortions while, at the same time, contending that "sex is 'assigned' at birth."

Ah, yes, the age old "We wish to be our own individual gods" routine, which includes choosing your own "gender".

The Supreme Court struck down Texas sodomy laws in Lawrence vs Texas because they felt the government has no business being in private bedrooms regulating sexual activities of consenting adults.

Most conservatives who favor smaller government would agree.

Gender identity does come in handy.......cackle.

I hear Muzzie Omar is sick of the gags about her marrying her brother.

So she’s currently identifying as a man...and is planning to marry her sister.