Kamala Harris’ first significant political role was an appointment by her powerful then-boyfriend Willie Brown, three decades her senior, to a California medical board that has been criticized as a landing spot for patronage jobs and kickbacks.

Then 30, Harris was dating 60-year-old Willie Brown, at the time the Democratic speaker of the California State Assembly, when he placed her on the California Medical Assistance Commission in 1994. The position paid over $70,000 per year, $120,700 in current money, and Harris served on the board until 1998.

The medical commission met twice a month, and Harris, a United States senator for California since 2017 and now a 2020 Democratic presidential candidate, missed about 20% of the meetings each year, according to commission records obtained by the Washington Examiner.

The seven-member board was largely comprised of late-career former state officials who were semi-retired or biding time before retirement. At 30 years old, Harris was the youngest appointee by some three decades.

Harris, now 54, and Brown, now 85, started dating in the spring of 1994, showing up arm-in-arm at numerous high-profile functions, including Brown’s lavish parties and celebrity galas. He has been separated but not divorced from his wife Blanche Vitero since the 1980s and has maintained a string of girlfriends over the years.

That June of 1994, Harris took a leave of absence from her job as a deputy prosecutor at the district attorney’s office in Alameda County, where she had worked for four years after graduating from law school. Brown appointed Harris to the California Unemployment Insurance Appeals Board, a position that paid $97,000 annually, which would be $167,000 in 2019. Five months later, Harris resigned from the insurance board, and Brown immediately appointed her to the California Medical Assistance Commission.

Brown, in a letter to Harris, wrote that he was “pleased to appoint” her to the board, which oversaw the payment of insurance providers for state-subsidized MediCal recipients. “I am confident that your knowledge and experience will contribute significantly to the important work of the Commission,” he wrote. IMG_0289.jpg

Harris had no medical background, according to a copy of her resume that she submitted to Brown at the time. Her experience consisted of four years as a deputy prosecutor, a handful of summer jobs and internships, and a volunteer position at a hospital fundraising group.

According to state records of the time, members of the committee had to be "selected from persons with experience in management of hospital services, risk management insurance or prepaid health programs, the delivery of health services, the management of county health systems, and a representative of recipients of service.”

Brown’s decision to appoint Harris raised eyebrows in political circles. “Both boards are reserved for political payback or occasionally for personal rewards for personal service,” said Brett Granlund, a former California Republican state assemblyman who worked closely with the commission while Harris was on the board. “The boards are considered plumb appointments as they require no work, no policy credentials, and are paid the equivalent of a full-time [state] senator for arriving at a one- to two-hour meeting each month.”

Granlund said the appointment seemed brazen at the time because of the relationship between Harris and Brown. “Screwing the speaker has its rewards,” he said. “Stevie Wonder could have seen through that play.” IMG_0283.jpg

However, Sandra Smoley, a registered nurse who served on the California Medical Assistance Commission from 1999 to 2004, said many of the appointees did not have medical backgrounds and there were no criteria governing appointments.

“I had a health background, but [the commission] wasn’t necessarily health related,” she said. Smoley said the commission was primarily run by nonappointed staff members who worked full time out of an office and handled all of the negotiations with hospitals.

Although the medical commission has since been disbanded, Smoley said the board did important work at the time. Its role was oversight. “I think the work of the Commission was highly positive,” she said. “The work that we did was necessary, and I do think it did effect access to care for MediCal recipients and also cost containment of hospital rates.”

Brown recently acknowledged in an op-ed for the San Francisco Chronicle that he “may have influenced” Harris’s career. "Yes, we dated. It was more than 20 years ago. Yes, I may have influenced her career by appointing her to two state commissions when I was Assembly speaker,” he wrote.

He noted that he had helped other politicians throughout his career, and said Harris was the “only one, who after I helped her, sent word that I would be indicted if I ‘so much as jaywalked’ while she was D.A.” He added: “That’s politics for ya."

Brown was one of the most powerful politicians in California when he and Harris began their relationship. He was a member of the California State Assembly for three decades, half of that time as its speaker, and later went on to serve as mayor of San Francisco. A charismatic and shrewd politician, Brown was also known for his slew of attractive girlfriends and apparent inability to stay with one woman for very long.

Although he faced several allegations of pay-to-play and corruption while he was speaker and mayor, multiple FBI investigations turned up empty and he was never indicted. IMG_0299.jpg

Harris was first described as the “speaker’s new steady” in a column written by the late San Francisco gossip columnist Herb Caen, a close friend of Brown’s, in March 1994. Photos from the time, obtained from Brown’s personal archives in San Francisco, show the couple cozying up and dancing at parties, including Brown’s birthday and his annual fete known as “The Reunion.”

According to Caen’s columns, friends of the couple were hopeful that Harris could convince Brown to finally settle down. To their surprise, the two broke up shortly after Brown was elected mayor of San Francisco.

“This news came as a shock to many, including those who found Kamala Harris attractive, intelligent and charming,” wrote Caen on Dec. 26, 1995. “Also flabbergasted: the brain-trusters who found Kamala the perfect antidote to whatever playboy tendencies still reside in the mayor-elect's jaunty persona.”

The breakup reportedly happened shortly after Brown met 32-year-old San Francisco socialite Carolyn Carpeneti, a woman with whom he would later have a daughter. While the two were dating, Carpeneti was paid $2.33 million for campaign work from a network of nonprofit groups and committees run by Brown and his associates, according to the San Francisco Chronicle.

"If this doesn't cross the line, it comes awfully close,” Jim Knox, executive director of California Common Cause, told the San Francisco Chronicle at the time. "At the very least it seems questionable for [Carpeneti] to have free use of a public resource in her role as private campaign consultant.”

That wasn’t the last time Brown would face scrutiny for steering benefits to women he was dating. In the 1980s, he reportedly hired his girlfriend Wendy Linka as a fundraiser, and she was later hired as a marketing director for city commissions after Brown became mayor.

Brown also continued to aid Harris’s political career after their split, supporting her successful 2003 campaign for district attorney. But publicly, Harris attempted to distance herself from the San Francisco mayor.

She called Brown an “albatross hanging around my neck” in a 2003 San Francisco Weekly profile, which reported that the “mere mention of their former liaison makes her shoulders tense, her hands clench, and her eyes narrow.” Harris said: “His career is over; I will be alive and kicking for the next 40 years. I do not owe him a thing ... Willie Brown is not going to be around. He's gone — hello people, move on.”

Brown recently joked to the Washington Examiner that if Harris wins the presidential election he would have to “leave the country.”

Harris' campaign did not respond to requests to comment.

Guess she wouldn’t mind the “attention” from pedo joe?

One can hardly guess what Willie might have gotten in return.

Sucks to be her.

She was attached to his staff.

She is not a natural born citizen.

Natural born citizens are born here of citizen parents and have only ONE nationality, that is what makes them naturally citizens, they could not be anything else.

Anyone who is born something else in addition to a US citizen is NOT a natural born citizen. 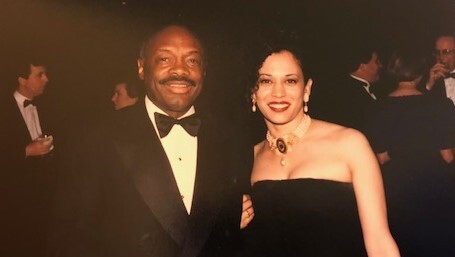 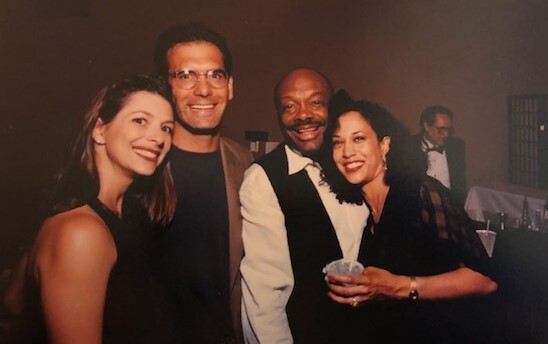 Willie had a lot of work for her, so did speaker Brown

The medical commission met twice a month, and Harris, a United States senator for California since 2017 and now a 2020 Democratic presidential candidate, missed about 20% of the meetings each year, according to commission records obtained by the Washington Examiner.

She was getting paid an enormous salary for meeting just TWICE a month. And...she missed about 20% of those meetings! No wonder Kalifornia is broke. 90% of government workers are parasites! 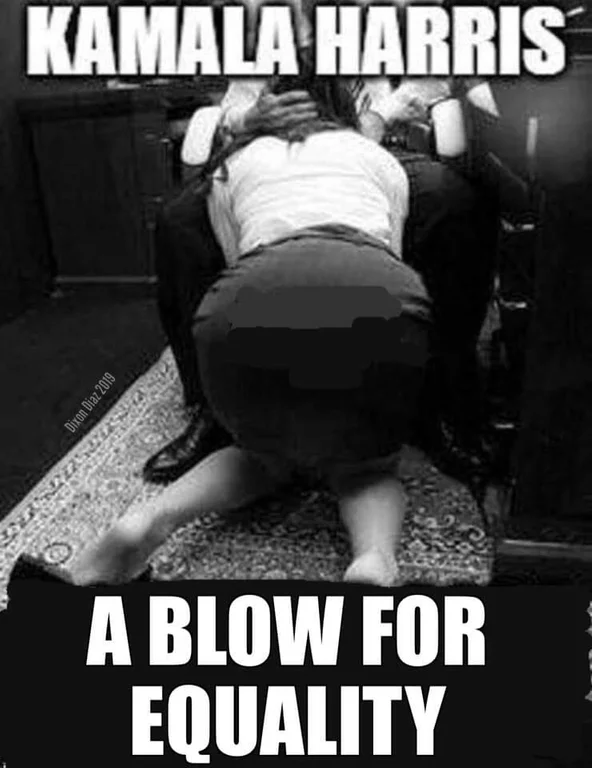 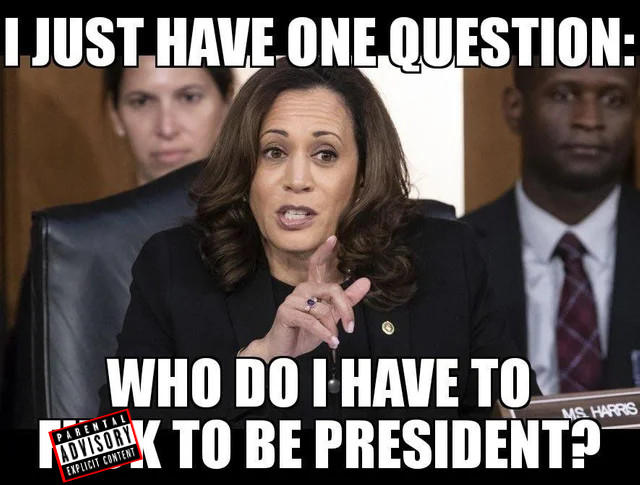 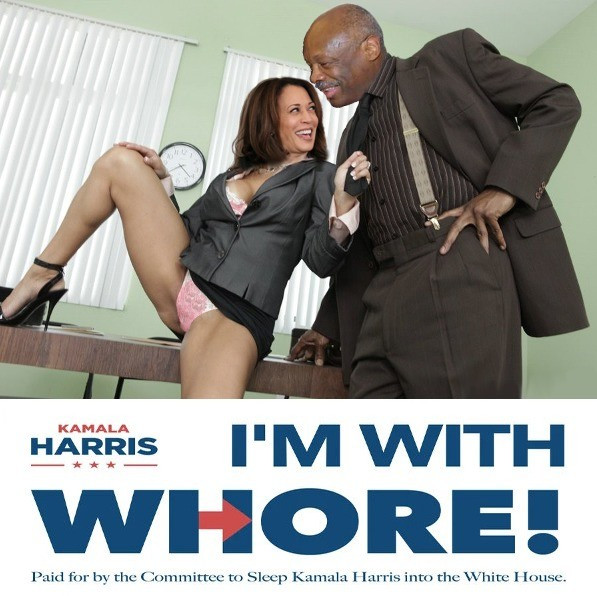 The Whorozontal Hoe can’t sleep her way into the presidency. She’s stuck in the senate.

She’s not a cheap prostitute.

The reason why Kamala Harris was not more successful running for POTUS was the giant mattress she wears strapped to her back and the knee pads she wears all the time..

The were very distracting....the problem is she’s worn them for years now and doesn’t know how to operate without them.

Did he leave it on the night stand?

What no one will ACTUALLY admit is… people with qualifications and intelligence…. NEVER seek or expect shameful, crooked short-cuts to reach their goals in life!

It seems ‘politicians’ and ‘entertainers’ sidestep this basic fact of life that everyone else out here in the REAL WORLD has to live with, day in and day out.

WE must openly demonstrate qualifications, character and documented experience to even be considered for employment... THEN… we must continue in demonstrating these things to KEEP our jobs. If WE break the rules or fail in our responsibilities, we are out!

None of these standards or requirements apply for ‘politicians’ or ‘entertainers’ and that’s why NO ONE respects them.

Their arena of life is populated with bimbos and con artists so immeasurably base that they have NEVER shown qualifications. It’s like they admitted right from the start that they were NOT capable and leap-frogged every qualifier they could.

The very worst are women who attain their goals based on connections, or worse, on the advantages of their person.... cheesy women who couldn’t score in the real world if their worthless lives depended on it.

There’s an ugly word for them and everyone KNOWS what it is. It makes me ashamed to BE a woman.

That cult of personality they thrive on has turned American politics and public life into a petri dish!