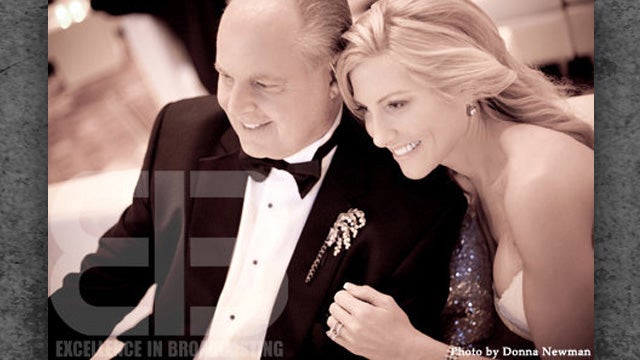 I looked for her dad; I couldn’t find her dad. I looked for her brother; I couldn’t find her brother. I said, “They gotta be with her.” I kept waiting for the door to open, and the door finally opened. I mean, I’m like a jack-in-the-box up there. I’m bopping up and down, eager anticipation, can barely contain myself. And then the door opens, and here comes Kathryn with the Wedding March down the aisle on the arm of her father, her brother nearby.

And I said, “It’s gonna happen. It’s gonna happen,” and it did. And, folks, I have to tell you, a lot of people get do-overs, a lot of people have false starts. I had my share. I got this one right, thank God. Got this one right. These past 10 years, I cannot imagine — and I’m, by the way, not just saying this. I share my passions with you, and I’ve been open and up front about as much as I can.

I’ll tell you, I cannot imagine these 10 years without Kathryn in them, especially now, after having gotten the cancer diagnosis. She’s just been a gigantic pillar of strength, and just does everything imaginable and possible to keep things as upbeat and positive as they can be. And I know it’s hard on her. It’s gotta be hard. It’s gotta be devastating on her, but I never see that.

She always hides it. She has always put me first anyway, but in the last six months or so, I haven’t known what being put first is until these past six months. I’m truly blessed by God with her in my life. She put together last night a video of the wedding that is comprised of still shots. And there were all kinds of still shots of people, guests, Elton John performing. 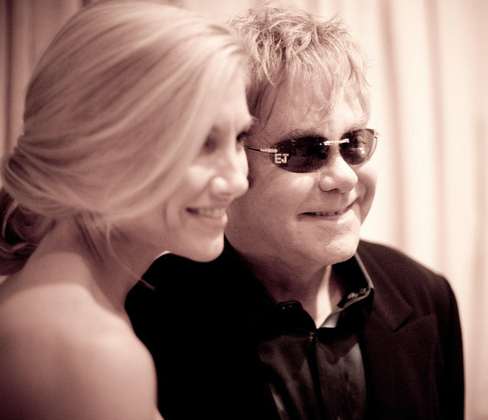 It was just all-encompassing, and she chose the Elton John song “I’m Still Standing” as the song to which all of these pictures are put, almost like a still shot video. “I’m Still Standing” is a perfect, perfect choice, and it even… Its focus is on the wedding, June 5, 2010, but there are even pictures of the State of the Union this past February where I was awarded the Presidential Medal of Freedom.

There’s some great pictures of us on the way to Washington on the plane and then on the way back after the event with the Medal of Freedom around my neck. She sent it to me last night and I looked at it. I just ran out of words and ran out of emotions to describe its impact on me. It was just… I’m sitting here saying, “I’m not worthy,” but, of course, I am, and that’s the point. 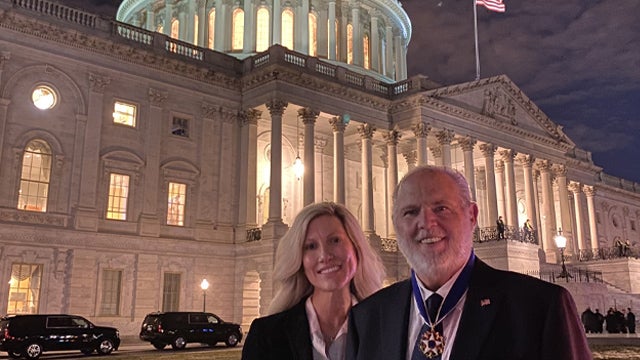 So I wanted to share all of this with you because I share as much of these kinds of things as I can. But it’s just really a blessing; I’m filled with so many. My entire life has been blessed, and that’s a very comforting way to look at it, to have no regrets. It’s not in my makeup to have regrets anyway, ’cause you can’t do anything about it. But literally to have no regrets, to be thankful for all of the people that I have met, all the people who are friends, have become friends.

All the opportunities that I’ve had, and all of the overwhelming support from across the spectrum that I have had, especially — but not limited to — the past six months. I only hope… I can only hope that for men and women both, that someday — maybe it’s happening now — in your life, that there is a Kathryn who is able to withstand anything that comes your way, to rise above it, to be bigger than it, and to keep you on as even a keel as possible.

There is also… I’ve got to tell you one other thing. It’s treatment time, ladies and gentlemen. So this means that I will be out at least Monday, Tuesday, and Wednesday of next week, and maybe Thursday and Friday. It is treatment time. If this goes this time like it did last time… These are three-week intervals. The infusions have a life span of three weeks, and then you go back and you repeat, for those of you that know how this works.

The first five days, I was inexperienced with this particular kind of chemo. I’d had the bad experience with the clinical trial drugs, and it was horrible. It was rotten. I had to get off of them. But I had no idea what to expect. You remember the Thursday three weeks ago. You know, I was out Monday, Tuesday, Wednesday, came in on Thursday, and I told you I wasn’t gonna be here Friday ’cause I was just gassed, meaning I was just worn out.

From Thursday, Friday, Saturday, to Sunday of that week three weeks ago (sigh), it was yucko. I didn’t talk to anybody. Again, it was like during the clinical trial drug period when they got to their worst. I just disengaged. I’m not complaining. I’m setting you up for the possibility I may miss all of next week if the process repeats, and I’m told that as the stuff is added to the system, it could even get worse. The treatment could become even more intense.

It doesn’t last for longer than the first week, maybe five days. But still, those first five days happen to coincide with workday week here. So I want you to know I’m gonna do my best to be in here Thursday and Friday of next week, but it may not happen. It just totally depends on how I react. Now, a lot of you continue to ask, “Is it working?” I don’t know. Folks, I really don’t know.

I can only give you my layman’s assessment of how I feel on a day-to-day basis. You know, there are good days and bad days, and there are good weeks and bad weeks. And this has been a great two-week period. And the last two to three days have been stellar. The last two to three days I’ve almost felt what I consider normal — and normal, to me, is those days before I even knew I had cancer and before I’d even started any kind of treatment.

I felt that way the past two, three days.

Now, that isn’t gonna last because the next treatment’s gonna come, and I don’t know why that is. 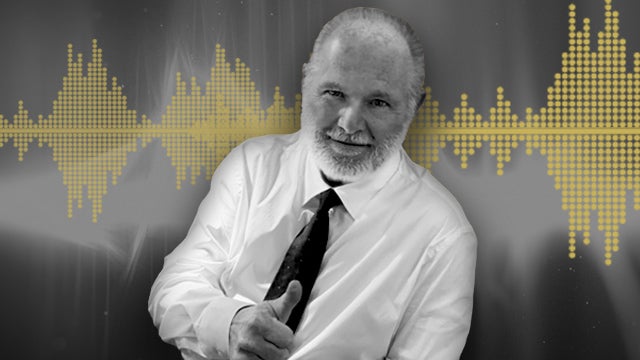 My shortness of breath has not presented in the last three to four days. And that’s the big deal. That’s the most limiting thing when that pops up. There are ways of dealing with that. There are ways of treating that. And they have been successful up to now. I also am of the solid, firm belief that prayers work. I have always thought so. It’s impossible to know. That’s where faith comes in. But my faith is solid that they work. And I know how many of you are engaged in prayer for me.

In fact, I pray every night to God not to disappoint you, that your prayers be answered. I do it in a respectful way. But that’s pretty much the status. I needed to tell you that next week is treatment week. And I’m looking forward to it, not because of the way I’m gonna feel, but because I just have a sense — and, by the way, this changes. Like the last time when I was going through the days I was gassed and tired, if you would have asked me then, I would have told you, “This isn’t working. This is horrible.” I mean, it’s just the way it affects people.

Chemo is a poison. It’s dastardly thing. And we tried three different kinds, three different cocktails, and you have to accept that when it’s working sometimes there’s a price to pay for it, and you deal with it. And this is just another example. I would be lost, I literally would be unable to process this as maturely and reasonably as I’m able to with Kathryn leading the way through this. So I’ve been very fortunate, folks.

It’s like I told you on the first day I announced this, or one of them, when I first saw the videotape or the film of the great New York Yankee, Lou Gehrig, announcing that he had ALS and thus he was retiring from the New York Yankees. He said, “Today I consider myself the luckiest man on the face of the earth.” And I’ll be honest. I watched that, and I said, “How in the world can he think that? He’s just been given a death sentence. How in the world? Is he just saying this for PR? Is this something the Yankees dreamed up that’s gonna build his legacy and so forth?”

And I was not being critical, just intellectually I didn’t understand how in the world, when you’re just told that you have something for which there isn’t a cure and you are going to succumb to it, how you then go out in front of a packed Yankee Stadium and say you consider yourself the luckiest man alive.

So we just keep plodding on folks. And we take every good day as a good day and hope it’s a trend. And try to be as normal as normalcy permits. It’s hard to escape the attitude that I am a cancer patient, but I try. And I have vowed, the reason I don’t do these updates very much is because I told you I’m not gonna be a cancer patient on the radio. But periodic updates I’ve decided, especially when it’s gonna result in my not being here, you deserve to know. So that’s that one.

I do believe that the dear Lord sent Kathryn to Rush for this very reason.

God bless Rush and may the Lord protect and heal him. Talent on loan from God, indeed.

42 posted on 06/07/2020 8:34:36 AM PDT by Dawgreg
[ Post Reply | Private Reply | To 36 | View Replies]
To: KC Burke
You are indeed blessed to share your life, your thoughts, with this loving wife. I pray that our Lord grant her more grace, more calm, more strength to continue with your healing journey.
I too am truly blessed with a loving wife.
Throughout this time, as thoughts of you enter my mind I offer prayers for your continued recovery.

Thanks so much SWL. I am blessed with a great defeat of my Stage 3. I have some serious neuropathy that will probably be permanent in my hands and feet. I will probably type slow, have poor handwriting, and be even a worse dancer than I was before all this but my cancer is all gone for now. I need to gain some weight back as I lost 80 pounds, but that will take a long time without a stomach.