The Modern Church WANTS to be Nonessential
Remnant Newpaper ^ | May 11, 2020 | Michael J. Matt

The Modern Church WANTS to be Nonessential 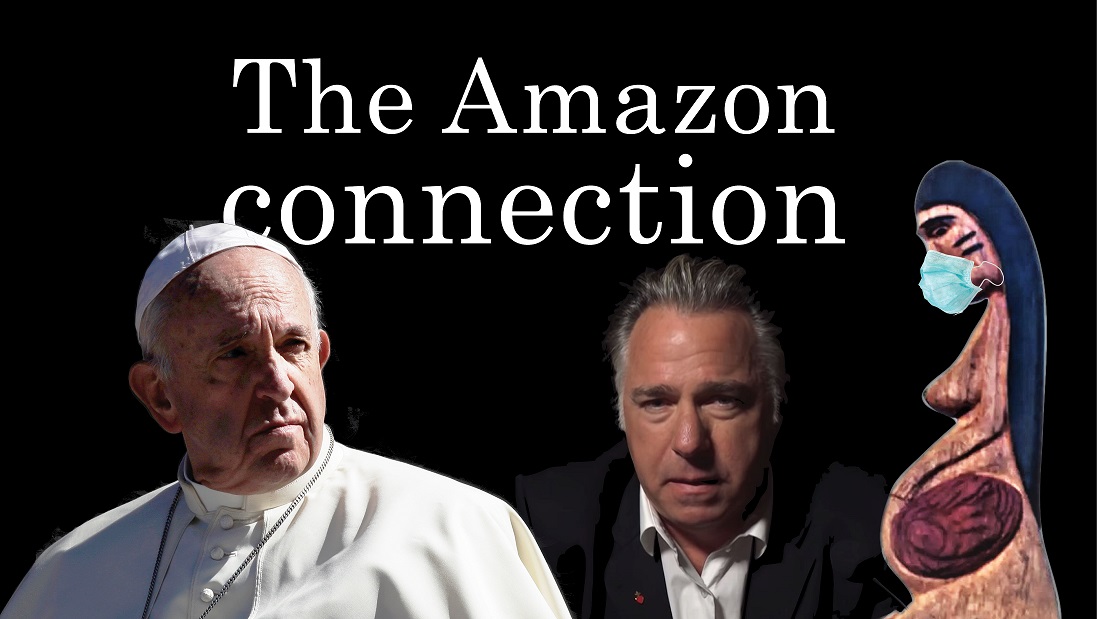 Remember the Amazon Synod? Seems like a lifetime ago, and yet it was the last thing anyone saw before the lights went out.

Francis says the Covid pandemic is Pachamama's response to climate change. I would argue that it's actually God's response to Pachamama. But who am I to judge?

One good thing about the pandemic? It put the Francis Road Show to Perdition on hold. The humble pontiff was right in the middle of building his new Tower of Babel when God stepped in: No "Global Education Pact," no Economy Francesco, no World Youth Day, no World Meeting of Families.

Our judgmental pontiff may never see those three fingers pointing back at him, but many Catholics have begun to wonder aloud if his Amazon Synod may have been Heaven's last straw. After all, pagan idols were carried in papal procession right into the Basilica of St. Peter itself.

Pandemic or not, Francis's continued good health is proving that, in addition to being all-knowing and all-powerful, our good God is also all-patient.

At the Amazon Synod, Francis was evidently tasked with making it official that the Catholic Church has surrendered to the world, the flesh and the Pachamama. He nearly botched his lines (especially when Pachamama ended up in the Tiber) but, in the end, he managed to muddle through.

And that's when all hell broke loose.

I was at the Amazon Synod. I witnessed an unconditional surrender, the terms of which agreed to the Masonic proposition that the Catholic Church is just one religion among many equals, thus making even Baptism itself essentially nonessential.

Amazon was hardly the beginning, however. The revolution kicked into high gear when Francis' more subtle predecessor let it be known some fifty years earlier that the Catholic Church had never been essential to salvation in the first place, since all religions are pleasing to God anyway.

Before he was through, "Saint" Paul VI had uncrowned himself, made God into the god of all religions and transformed  the venerable Roman Rite into something unrecognizable as Catholic, better understood as a communal meal and much more befitting the banquet table than the altar.

With the altar of sacrifice itself now rendered nonessential, it was no great feat to transform the priesthood into something equally disposable.  Stripped of most of their sacrificial duties, priests became "presiders" whose duties and responsibilities could mostly be assumed by the People of God.

From here, everything else fell away. Nuns and sisters decided their habits and vows were about as essential as meatless Fridays. And with Baptism, Priest and Altar increasingly nonessential to salvation, millions of Catholics concluded that going to Mass even on Sundays was roughly as essential as the Communion rail.

So when the global pandemic landed years later, guess what was listed as nonessential for the first time in two thousand years. Why? Because it is, thanks to their Holinesses and Excellencies.

And this, dear friends, is the Church that Modernism built.

From the “How Did We Get Here” file, here’s a flashback from the Amazon Synod, filmed just weeks before the Covid Pandemic turned the world upside down.

Perhaps it will help the many newcomers to Tradition to better understand how the Catholic Church came to be transformed almost overnight from something essential into something so terribly nonessential.

“Clergy, and in fact Christians everywhere, have been given a not-so-subtle message through this pandemic regarding the place of faith in American national life, at least as expressed through some of our political leaders and government policies. The Church is “non-essential” and has no place of leadership in the nation. Leaders of both parties have made many statements to that effect, teaching Christians that their services are unimportant, that public prayer, the sacraments, and public worship have nothing to do with our restoration or the ending of a crisis in our nation. Rather than being encouraged to provide public statements that give counsel, truth, or ethical evaluations, religious leaders have been encouraged to be silent and shutter their doors. Our national dialogue glorifies the voices of scientists and doctors but not the Christian men and women in the front lines, ministers and priests behind the scenes and fighting against the poverty, depression, and despair that COVID19 has brought upon many.

In some states, such as California, the lock down has been more extreme, with clergy forbidden from visiting the sick as they die of this virus in hospitals because they are deemed non-essential. COVID19 patients are dying alone. No one is praying with them, administering last rites, keeping them hopeful with their eyes on Heaven. This spiritual help with spiritual realities in the midst of suffering and death is deemed unnecessary.

The recent comments by New York Governor Cuomo illustrates this unfortunate mindset and the growing secularization of those who are defining the national narrative. While giving an update on the virus and its steady decline, without any prompting, Governor Cuomo stated emphatically: “God did not do this. Faith did not do this. We did this.” Can he really be so sure? Does he know the spiritual world and have access to the other dimension and all its workings? Can he really believe with such certainty that God had nothing to do with the lives saved, the doctors and nurses who risked their lives, the love shown between strangers? What a false and horrendous dichotomy that is, completely devoid of any real hope outside of a temporary return to life-as-usual.

As the Church, we must reject and stand firm against this grotesque secularism. We must not collaborate with our own trivialization. We must reject the label of “non-essential” placed on us. We must continue to embrace our call to be a light in the darkness, a city on a hill, a garden in winter. This is the time to not give up what many of us have engaged in over the past couple months: serving, praying, thinking innovatively and witnessing to the glory of Christ wherever and however we can, rather than the glory of man. Many churches have shown just how essential they are, but our perseverance must not lessen simply because the pandemic seems to be abating. It’s precisely in moments like this that we are needed most, and as restrictions ease and less people get sick and die, we mustn’t then say with the world, “Ah, we have arrived! Our summer is here.” We have not arrived. We are only passing through temporary respite before the next trial, the next earthly winter. We will keep on passing through, until the Summer to which all other summers point appears, and He who loves us is manifested to the world and brings the final thaw.”

Pachamama is a pagan idol, to be sure, but she’s also pro-life.