JIHAD IN WW1, Ottoman Jihad against the Russians, French, British and genocide on Christians

A: Ottoman Jihad against the Russians, French, British.

B: Jihad genocide on the Armenians

Against the: Russians, French, British TThe Ottoman Empire called for a military jihad against France, Russia and Great Britain in November 1914. How did this affect subsequent Allied campaigns in the Middle East? David Woodward charts the demise of an empire and a dramatic shift in the region's balance of power.
http://www.bbc.co.uk/history/worldwars/wwone/middle_east_01.shtml

After the outbreak of war the Ottoman government had proclaimed a jihad, a holy war, against the allied and associated powers. It was feared that this appeal would have dangerous effects among Muslims under British rule,
http://books.google.com/books?id=Yq5AUlWjZpsC&pg=PA165

Indeed, if we consider Berlin's switch to a wartime policy against the British, French and Russian Muslim territories, there is a unique feature: jihad made in Germany. Eye-witnesses, such as one of Britain's finest writers, made the whole German-Ottoman jihad plot public in October 1916. In his classic espionage thriller Greenmantle, John Buchan told a worldwide audience the sttory of how Kaiser and his agents pushed the Ottoman Turks to proclaim a Holy War against the British throughout the Muslim lands.
http://books.google.com/books?id=7cjFFgvUdDUC&pg=PA275

Jihad and Iran On November 12, 1914, Sultan Mehmed V, in his capacity as Caliph, proclaimed holy war and appealed to the Muslim subjects of the Entente powers to join in a common struggle with the Ottoman Empire. The Sultan's proclamation was immediately posted on government buildings... This proclamation was confirmed in a fatwa issued by the Shaykh-ul-Islam on November 14. This fatwa specified that the holy war was directed against the enemies of Islam, particularly Britain, France and Russia.... On November 21, the Sultan renewed the proclamation in an appeal to non-Ottoman Muslims that they join the jihad. ...
http://books.google.com/books?id=4mug9LrpLKcC&pg=PA62

... the Ottoman jihad in Europe, was not an overnight phenomenon
http://books.google.com/books?id=c8Xb6x2XYvIC&pg=PA20 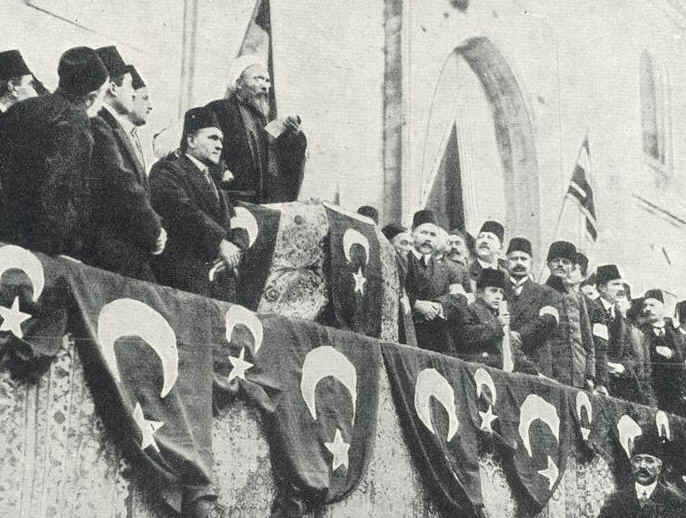 The Sheikh-ul-Islam proclaiming a Holy War The Young Turk regime relied on anti-Christian propaganda in the form of jihad to mobilize the Turkish masses with fanatical nationalism and hostility toward the Armenian, Assyrian, and Greek communities.
http://books.google.com/books?id=7J-g7Wld1vEC&pg=PA131

The genocide of the Armenians was a jihad. No rayas took part in it. Despite the disapproval of many Muslim Turks and Arabs and their refusal to collaborate in the crime, these massacres were perpetrated solely by Muslims and they alone ...
http://books.google.com/books?id=C2GgHl9Rls0C&pg=PA197

Contemporary accounts from European diplomats make clear that these brutal massacres were perpertrated in the context of a formal jihad against the Armenians who had attempted to throw off the yoke of dhimmitude by seeking equal rights and autonomy.
p. 671
Jihad Genocide of the Armenians
TWO EYEWITNESS ACCOUNTS OF THE PLIGHT OF THE ARMENIANS DURING WORLD WAR I Palestine (1915) It has been more than proved (of their own admission!) that it was the Germans who "organized" the control and "correction" of the Armenians. Yet, these messengers from hell, who claim to be superior to others in many things, also describe themselves as "better Christians" than all the others...
http://books.google.com/books?&id=rU3YAAAAMAAJ&dq=ARMENIANS

...genocide of the Christian population living within its extensive territory. The Sultan, Abdul Hamid, began the program in 1894. When WWI broke out, the Ottoman Empire was ruled by the "Young Turk" dictatorship that allied itself with Germany. ... It is estimated that over 10000000 people were killed by Jihad-style genocide from 1915-2003. ...
http://books.google.com/books?id=biDlAAAAIAAJ&q=wwi

Young Haj Amin al-Husseini in the Ottoman army [later to be the Grand Mufti who worked with the Nazis
http://www.tellthechildrenthetruth.com/amin_en.html

"Jihad made in Germany: Ottoman and German propaganda and intelligence operations in the First World War," Tilman Lüdke, Lit, 2005

Were these the origins of the Muslim Brotherhood?

All nasty propaganda! Islam is a ROP!

3 posted on 12/06/2010 3:40:44 PM PST by 353FMG (Soon, the peoples of the West will have to choose between ISLAM and their country.)
[ Post Reply | Private Reply | To 1 | View Replies]
To: madameguinot
No, (Muslim Brotherhood's) Hassan al-Banna has a 'seperate' interest because he was annoyed with Christian missionaries in Egypt:

Seeds of conflict in a haven of peace: from religious studies to interreligious studies in Africa - Page 16 Frans Jozef Servaas Wijsen - 2007
Anti-Western and anti-Christian sentiments have been prevalent ... in March 1928 by a primary school teacher, Hasan al-Banna, who fought for the preservation of Islamic morality and against the work of Christian missionaries in Egypt
http://books.google.com/books?id=APKxiXXxiMQC&pg=PA16

However, he did carry a jihad agaisnt the British and the Jews as you can see here and:

A Genealogy of Evil: Anti-Semitism from Nazism to Islamic Jihad - Page 67 David Patterson - 2010
Because, said al-Banna, beginning with the first Caliphate, the Muslims “warred against guileful Judaism” and “they struggled against Christianity,” the two main sources of the defilement of Islam and the world
http://books.google.com/books?id=lMLmK-fmf8kC&pg=PA67

lol, those "fearmongering" in the west are to blame...

Very interesting piece, and it’s obvious you put some pretty serious research into this.

Because they backed the Kaiser in WWI, the Ottoman Empire forfeited everything when they lost, leaving the French and the British to divvy up the spoils. The Ottomans were a brutal bunch and they deserved to lose it all. The relationship between the Ottomans and the Germans goes back almost a century before WWI, and the notorious German arms firm Krupp made much of the family fortune in selling the Ottomans the latest version of the Der Kanonenkönig’s latest wares, ensuring that the Ottomans were always armed to the teeth.

It’s also interesting to point out that there was another major jihad that took place during the American Civil War. “The Mahdi” arose in what was then called the Soudan, and his jihadis rampaged all the way down the Nile River Valley into the heart of Africa, slaughtering anyone that would not convert to Islam, and thousands more they didn’t bother to ask.

Sir Henry Stanley was contracted by the King Leopold of Belgium to lead a couple of major 18 month long relief expeditions on foot up the Congo River and it’s many tributaries to try and rescue the leader of the Belgian Congo. (”In Darkest Africa” was Stanley’s account of two of those expeditions, and it is excellent reading and a very good account of some of the Muslim extremism that infected Africa at that time.)

Even Ayatollah Khomeni didn’t object if his followers called him “Imam”, which is an allusion to the 12th Imam.

The coming of a Mahdi is a constant theme in Islam, and it regularly results in some very mortal (but extremely ambitious) Muslim Cleric who convinces himself that he is the “The One” and launches his own version of Jihad against the rest of the world. The cycle will never stop as long as there are fanatics who follow this “religion”.

Reality Check
When England and France; the Ottomans staunchest allies for many centuries, even as they were ruining Hungary and beseiging Vienna; married Tsarist Russia, Constantinople was shocked that the Tsars old grab for the Bosphorus was about to transpire.

If a Jihad was successfly waged in WWI it was the British and French causing the Arab uprising against the Turks, and outfitting millions of Muslims to fight on the western front.

Wow. No one talks about the persecution of the Greek millet in writing anymore. I had friends prevented from communicating with me because of my study of the Ottomans, due to said persecution.

Thanks so much for your insight. Now, with the modern Turks going towards Islamism, there’s more than one reason (or shall I say millions of reasons as in victims of Jihadi-genocide?) to expose the Jihadism within their fabric.
As to MAHDISM, there’s no argument against the fact that Islamic supremacy, war-towards-Islamic-Caliphate are all tied together.

Early in 1914, even before the assasination at Sarajevo and WWI had been accomplished Kitchner had assured the Amir of Mecca that Britain would be with the Arabs against the Turks.

Later that year when the war was a reality, Kitchener was by then the Supreme British Warlord.
He told the Amir of Mecca that:
“It may soon be that an ARAB of the TRUE RACE will assume the Caliphate and at MECCA and so good may come BY THE HELP OF GOD out of all the evil that is now occuring”

Arabs being the “true” race of Islam...

Bookmarked for later reading. Thank you VERY much for sending me the link to this thread. I greatly appreciate it. I wasn’t aware of these things previously.

You are quite welcome.