Have you ever wondered what happened to all the POWIES, the People of Occupy Wall Street? You know, all those pathetically sad people who signed on to the Progs’ last populist class warfare movement?

It was the story of the year in 2011, and you may recall it was also the story that gave MOTUS her international creds. My post, The People of OWS: like the people of Wal-Mart, only not as smart, was Instalanched and picked up by the Daily Mail Online and read ‘round the world: I’ve been kind of a big deal on the Internet ever since. 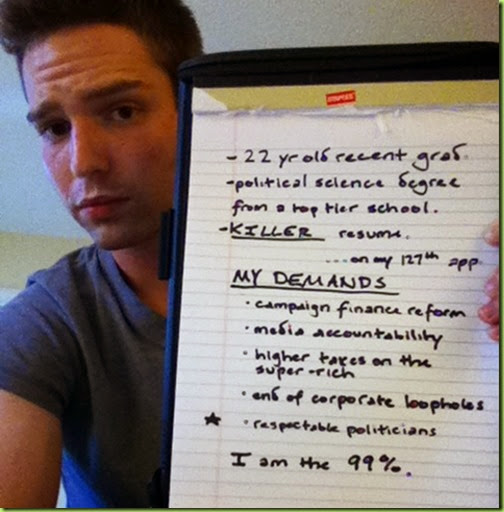 A political science degree? Isn’t that special! And you can’t figure out why you can’t find a job? Try offering more skills and making fewer demands. You’re welcome.

Here’s a quick recap to bring you up to date: the fall of 2011 saw the U.S.’s first country-wide ginned up class envy protest. It was the launch of the Left’s 2012 presidential campaign which it correctly predicted would be waged against a rich white guy. The Occupy Crowd started holding sleep overs around New York’s Zuccotti Park in September: 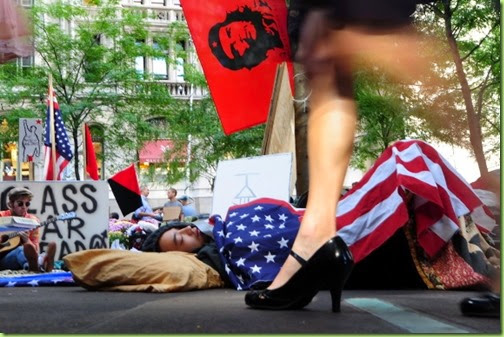 which continued ‘till it got really cold, at which time they moved to the West Coast where the climes were more temperate: 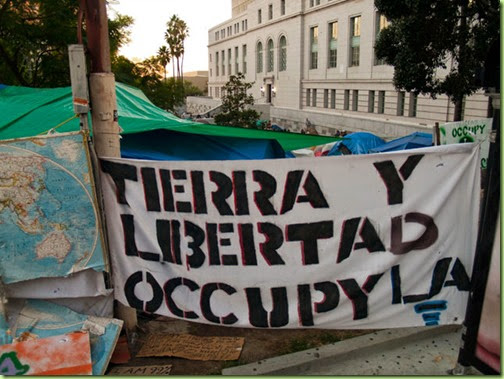 If you’ve erased the POWIES from your memory bank entirely, here’s a quick refresh: the POWIES represented the 99 percenters (get it? everyone except the 1 percenters?) who spent weeks in front of cameras on the internet feeling guilty for everything from being alive: 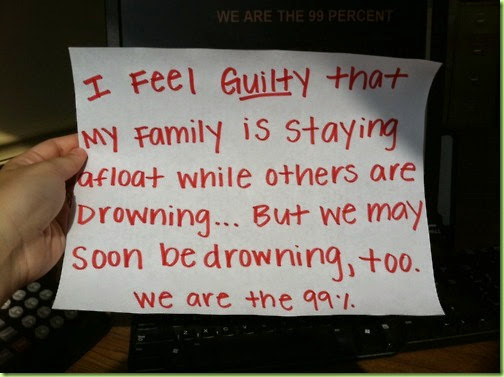 To wondering if it was even worth being alive: 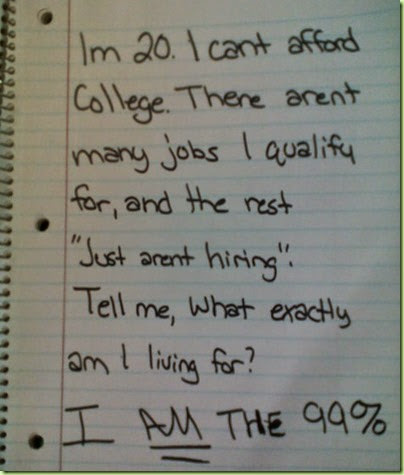 They complained of being forced to take on even more debt: 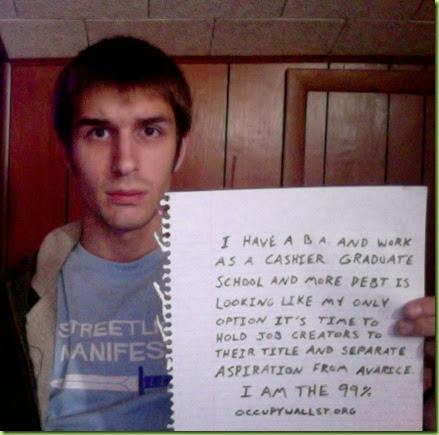 Let me guess: BA in Political Science? Psychology? Maybe you should start over in the category “degrees that start with the letter ‘A’”  – like Arithmetic or Accounting.

And whining about the cost of college degrees that are worthless in the real world: 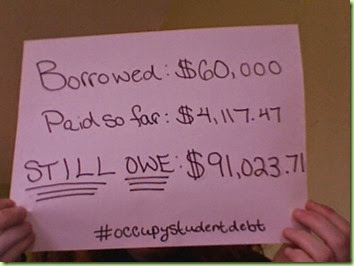 See how useful a degree in arithmetic or accounting could be?

Also they hung out protesting the banks who forced them to borrow all that money, Wall Street for creating the money and the 1 percenters for enjoying it: 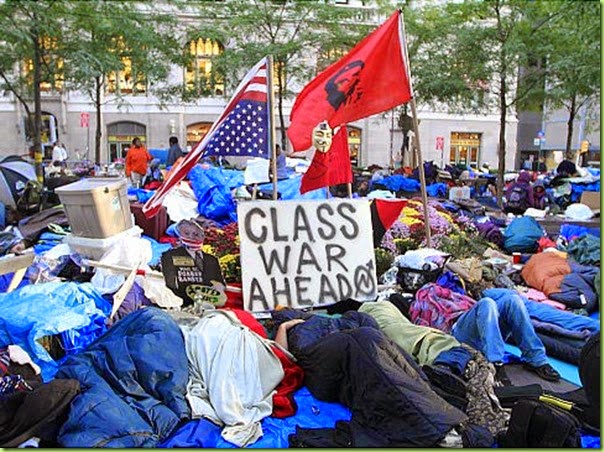 All while organizing themselves into different units, some responsible for food (mostly from nearby capitalist pig pizzerias, as their boxes were 100% recyclable): 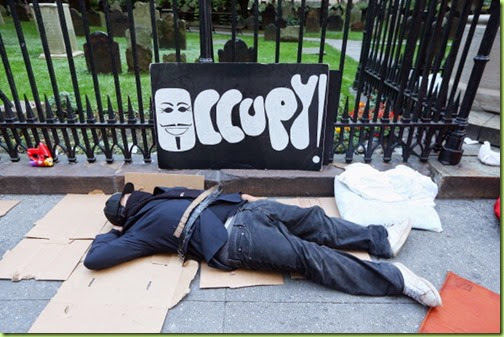 Some were responsible for entertainment, be it drum circles or simply inventing a new method of crowd-sourcing known as hand singles: 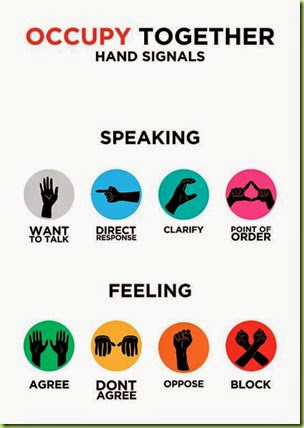 All while accidentally recreating the irony that supposedly “died” on 9/11: 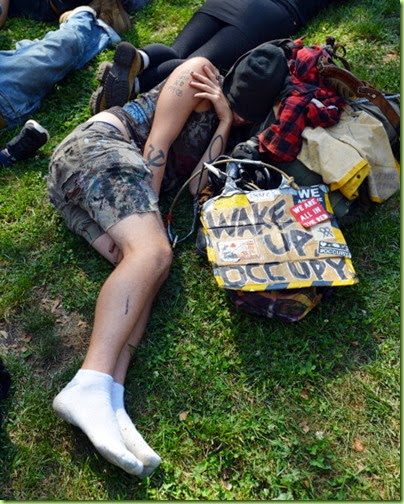 Wake up babe! Time to put that hammer and sickle to work!

Butt when all  else failed to produce the desired result – free stuff – rioting and looting became the most efficacious way to occupy the country: 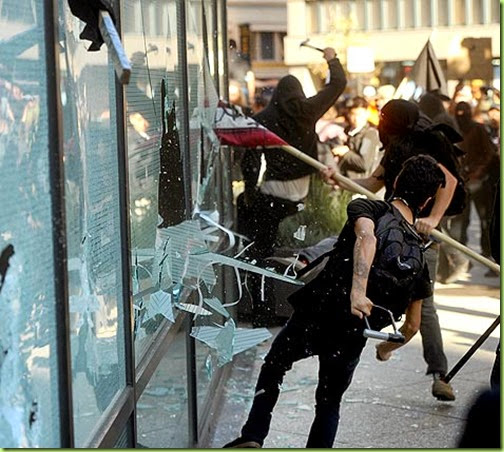 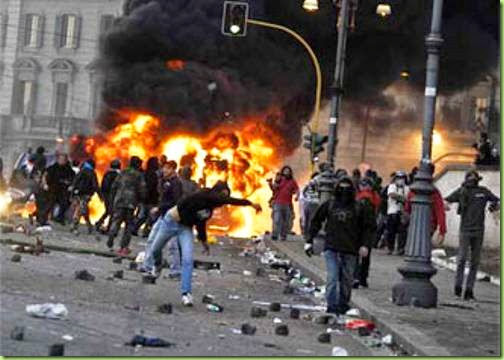 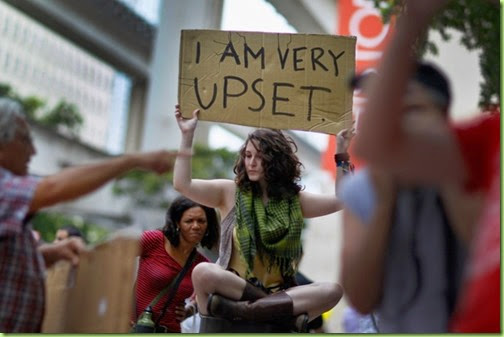 And since class warfare didn’t really catch on as well as you’d HOPEd, it was time to bring in the big guns, so to speak: 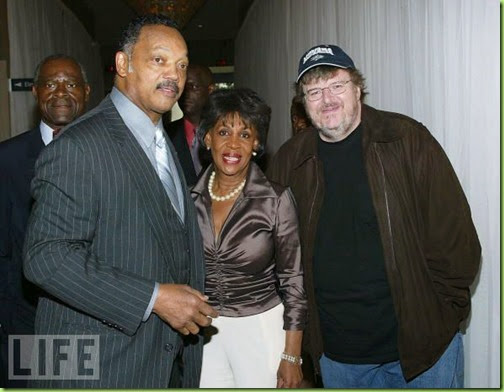 Birds of a feather Jesse, Maxi, and Mikey

Time to move on from class warfare (temporarily) to race warfare; ala Trayvon, only better organized this time: 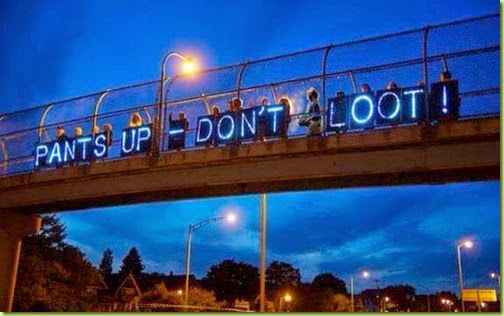 So the call was put out for all former occupiers, especially occupiers of color, to show up this week in Ferguson, Missouri. They’re hoping for an adequate show of outrage from anarchists united (there’s that irony thing again!), POWIES and just pissed off peoples of color (POPOC). They probably could have drawn a much larger mob if they could have arranged for the protest to somehow take place in either a more fun location or at least a warmer clime.

Because as you may recall, with all this global warming, it’s getting harder and harder to get the anti-carbon occupiers to show up, due in part to, uh, the weather. They are apparently fair weather friends.

So attention all former POWIES:  your participation is desperately needed at the Occupy Ferguson Camp sometime this week. Previous experience with Molotov cocktails and tear gas desirable, butt not mandatory. And don’t worry: they’re planning to keep the protest “peaceful” – or something.

There’s nothing new under the sun

What the bleep is wrong with these American mothers of ISIS beheadees? The mom of Peter Kassig a/k/a Abdul Rahman Kassig–newly separated from his head–is praising allah as “the one god” and saying he “will prevail.” HUHHHHHHH??????????? F-U, lady.

Just as the plastic-surgery-afflicted mom of Joel Sotloff praised Islam and ISIS after the Islamic State beheaded her son, the mom of Peter Kassig a/k/a Abdul Rahman Kassig is praising Islam, too. And not only that but she’s praising Islam and claiming allah is the one true god inside a Methodist church. Well, I guess that makes sense, since the Methodist church regularly kisses Islamic ass.

Surely you jest (and I'm not calling you Shirley - or maybe I am.)

The poster girl for any liberal lunacy.

You can almost the nobility dripping off the sign.

...or what can I loot with one hand holding my pants up?