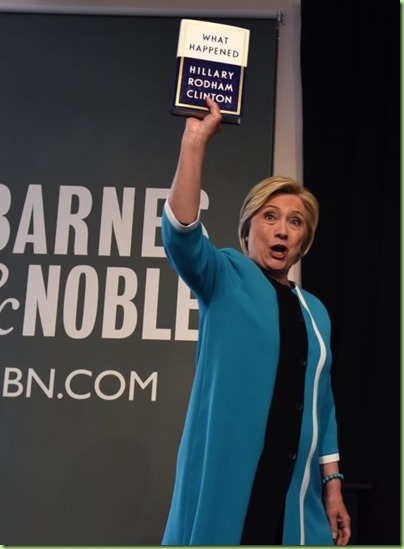 There Was a Vagina Fashion Show at New York Fashion Week -  no wait, that’s not the right story. I’m supposed to be reporting on Hillary’s book signing in New York; right, here it is:  Hillary Clinton’s Book Signing Was As Insufferable As You’d Expect.

Yes, Hillary finally crawled out of the hole she fell into while stumbling around in the woods of Chappaqua. She appears to have spent her time in the hole writing a book that deconstructs her spectacular loss to Donald J. Trump because everybody was dying to know WHAT HAPPENED!?  She managed to create a spectacular tome of creative non-fiction in which she makes vain attempts at taking “full responsibility” for losing the election  while simultaneously spinning tales that shift the blame to everyone else. Specifically she fingers  Comey, the FBI, Obama, Biden, Sanders, Putin, Macedonia content farms, misogyny, the media, and “gullible Americans” aka Deplorables.

All that time, all her experience and she still couldn’t manage to lie with sufficient grace and conviction to persuade even former fan-girls. 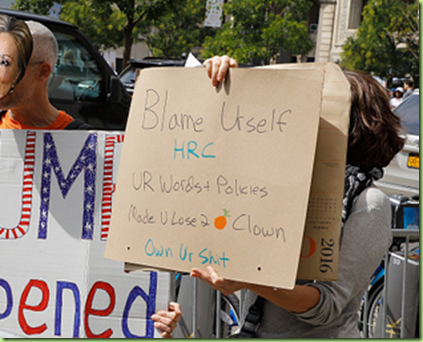 And that leaves the rest of us in the alternate reality rabbit hole of Hillary’s world. But here, let the New York Post author explain:

Among the enduring criticisms of Hillary Clinton: Her sense of entitlement is limitless. She’s tone-deaf and doesn’t understand the average American — nor does she care to. Her greed is insatiable.

Add to this a gaping lack of self-awareness, and you have all the ingredients for the New York City launch of Hillary’s nationwide book tour Tuesday morning…

For Hillary supporters, this event was meant to be a salve, a corrective, a moment of collective grief and healing…

Hillary’s attendees were willing to follow any directive. There were many, and here, in part, were the written instructions:

“A limited number of wristbands for entry will be distributed on a first-come, first-served basis with purchase of the featured title at Barnes & Noble Union Square. Hillary Rodham Clinton will sign copies of her new release, What Happened and the 2017 illustrated children’s edition of It Takes a Village, no exceptions or personalizing. She will sign up to two books per customer, one of which must be What Happened. No other books or memorabilia please. Posed photos or selfies will not be taking place . . . Book purchase and wristbands are both required to meet the author, no exceptions. Customers without wristbands will not be allowed to participate in any capacity.”

Democrats should have followed their own advice

In other words, everyone was here to serve two purposes: To make sure “What Happened” debuts at No. 1 on the bestseller list and to line Hillary’s pocket…

This book, we’ve been told, will show us a different Hillary, a humbled candidate taking personal responsibility for her loss. Yet just as that’s not true…in hawking it, she can’t help but revert to form. Wait for hours, sweat it out, love her all you want — she’s popping in for your cash, nothing more. 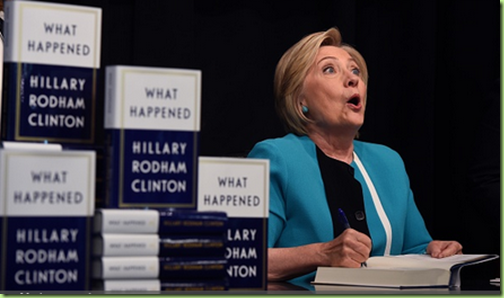 “Then the Big Bad Wolf huffed and puffed and blew my house down! And that’s ‘What Happened’”

And that’s this week’s report from the rabbit hole. 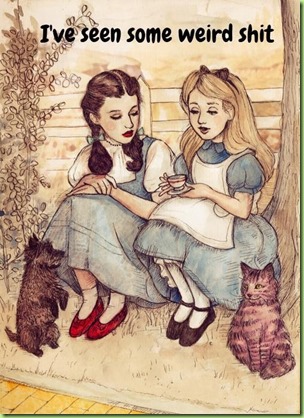 With role models like Hillary, is it any wonder American “culture” is presently festooned with entitled bullshyte artists? 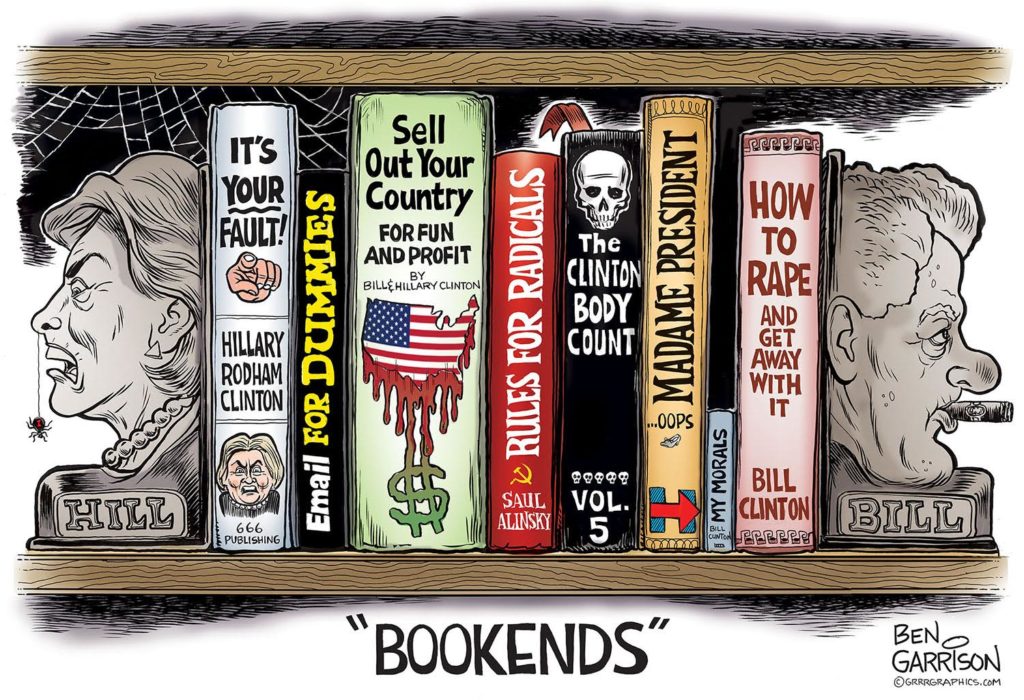 The Latest From Ben Garrison
For Your Edification

No sense in making any comments about this dreadful failure of humanity, Hillary Clinton!!! Satan awaits her. Shucks, this woman cannot even be a decent Gramdma

So then why waste taxpayer dollars investigating Russian influence in the election? Hillary knows what happened.

Why release this book during the investigation? It is not far fetched to believe What Happened will be the unofficial “go to” guide for Mueller’s investigation.

The sign “Own ur Sh*t” is quite appropriate. The hag has never honestly taken responsibility for anything she has done in her worthless life.

“Creative non-fiction”. A way to say “I told a lie” in written form .... Compared to the spoken version “I misspoke.”

Originally, all these tours were NOT going to be book signing tours. In fact they were explicit....no books will be signed.

We’re right now being subject to the “It’s all about ‘Me, me, me!’ “ tour from Hilllary Clinton. No wonder why many are laughing at her....