Green Bay Packers have called on fans to join in with the team and link arms during Thursday's playing of the national anthem ahead of their clash with Chicago.

President Trump's latest comments on Tuesday have added to an already tense situation and players protests reached unprecedented levels at the weekend when more than 200 players took a knee during the playing of 'The Star Spangled Banner'.

On Thursday, all eyes will be on Lambeau Field when the Packers and Bears face off in the first game of Week Four to see how the next stage of the protest plays out.

Before Sunday's victory over Cincinnati, Lance Kendricks, Martellus Bennett and Kevin King sat on the bench as the anthem played, other players stood alone while the rest of the players stood arm-in-arm - the result of a team meeting on Saturday night that allowed each player the freedom to do as they saw fit.

Ahead of Thursday's game, the Packers released a statement from the players speaking of their unity and calling for a show of solidarity by asking the fans to join them.

"This Thursday during the national anthem at Lambeau Field, Packers players, coaches and staff will join together with arms intertwined," the statement read. "When we take this action, what you will see will be so much more than just a bunch of football players locking arms. The image you will see on September 28th will be one of unity.

"It will represent a coming together of players who want the same things that all of us do - freedom, equality, tolerance, understanding, and justice for those who have been unjustly treated, discriminated against or otherwise treated unfairly.

"You will see the sons of police officers, kids who grew up in military families, people who have themselves experienced injustice and discrimination firsthand, and an array of others all linking together in a display of unity.

"Those of us joining arms on Thursday will be different in so many ways, but one thing that binds us together is that we are all individuals who want to help make our society, our country and our world a better place. We believe that in diversity there can be UNI-versity. Intertwined, we represent the many people who helped build this country, and we are joining together to show that we are ready to continue to build.

"Let's work together to build a society that is more fair and just. Join us this Thursday by locking arms with whoever you're with, stranger or loved one, wherever you are -- intertwined and included -- in this moment of unification."

In a statement on Saturday, following Trump's initial comments, Packers president Mark Murphy had called the president's words 'divisive', while quarterback Aaron Rodgers told the press after Sunday's game they would 'keep choosing love over hate and unity over division', and the players' statement reaffirms that belief.

"Aaron spoke first and he kind of laid it out and laid out the fact that he's on our side and he understands the message being conveyed and trying to get across," Kendricks said of a team meeting.

"And then Marty wrote a statement and in the statement he said we're going to lock arms and he's going to challenge the fans to lock arms as well, so it kind of puts them in a position where it's like, 'Look you're either going to unite with us or you're not.'

"I think that's really cool because it puts them in a position where it's like now we're talking to you, so you make a decision, peacefully make a decision."

If the fans do that, we are done. BLM is behind all this bullshit and we are done as a nation.

Pure genius. What a wonderful way to start multiple fights up in the stands!!!

“NFL—didn’t they used to play football—nah—they were famous political activists—nah—just a bunch of rich big people—it was so long ago—just can’t remember.”

4 posted on 09/27/2017 3:09:25 AM PDT by cgbg (Hidden behind the social justice warrior mask is corruption and sexual deviance.)
[ Post Reply | Private Reply | To 1 | View Replies]
To: 2ndDivisionVet
So now the thugs and cowardly management want the fans to join in on their ridiculous "protest" against the flag, our nation, our veterans, and our police?!!!!

What's next? Do they want the fans to wear "Cops are Pigs" socks? 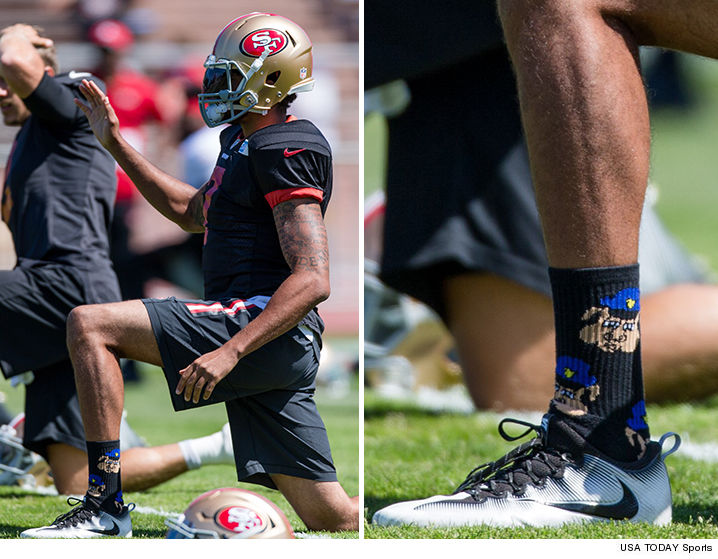 This ENTIRE protest is based on LIES!

Hands Up Don't Shoot is a LIE!

Even Obama's Civil Rights Task Force and his FBI that investigated discovered the Michael Brown was a scumbag and that Officer Wilson was attacked, and that Brown tried to grab his gun.

The Freddie Gray death was a complete accident.

Yet, the deaths of cops at the hands of BLM terrorists happened.

Pissing off and insulting 75% of your customer base is never a good idea...

notice how they are trying to slither out of this....”all about unity”.....AHAHAHAHAHAHAHAH...too late boys..

I think those fans who do show up for the game....will be using abusive chants on the Packers and Bears for the rest of the game. I don’t think this will go very well.

And what of the fans who don’t want to link arms? Maybe they can leave.

The NFL is dead to me now.

I was never a huge fan (much prefer college football). I grow weary of the oppressive virtue signalling.

This is about blaming whites for everything under the sun

My right hand will be over my heart during the National Anthem. Always. I will never “link arms” with someone who doesn’t respect our flag and our anthem enough to pretend to be decent during that anthem. As for Thursday’s game. I will not be watching NFL this year, not even for a peek at the latest outrage.

oh please not my home state - not green bay

you guys better stand up and do whats right

Then what? Join the GB Packers after the game in burning a couple of cop cars? No, thanks!

Look at the poster boys #BlackThugsMatter activists hold up as examples of the worse abuses:

I could go on, but the overwhelming majority of police shootings are justified. The ones that are not lead to prosecution of the cop. There are a few where we cannot tell who is at fault . . . because the video starts just after the critical part of the encounter. Coincidence? I think not.

I can’t get out of my head, this ridiculous Jerry Jones having his whole team take a knee then standing for the Anthem. Can anyone explain why? To me it was a cowardly wimpy gesture. Kinda like, here’s an F you to Trump and to the cops and our military etc... but now let’s stand up for our anthem...

Shows that’s it’s about the money.

I’d say, why not make it easy. Just stay in the locker room for the Anthem, like the college players do.

I called and cancelled my cable tv yesterday. Not one more penny from me to ESPN, Disney or CNN or any of the others. I see that Direct TV is letting people cancel the NFL package too. When I asked the rep if he’d had many cancellations he said yes, ALOT.

Over the years, I have put many things aside for nationally televised Packer/Bears games. This year I’m putting the Packer/Bears game aside for anything else on tv... I think Mountain Men is on Thursdays. Not great, but good enough.