Parts of the West got blasted last week with triple-digit temperatures. Hot weather hits the East today, with temperatures in Central Park expected to reach the mid-90s.

So how hot is too hot before you drop? There’s no one answer, and much depends on age and physical condition.

The danger zone begins at a heat index of 104 degrees, when, with prolonged exposure, sunstroke, heat cramps or heat exhaustion are likely, and when heat stroke, which can be deadly, is possible.

A heat index of 126 or higher is extremely dangerous. And it is not as hard to reach as it might sound. A temperature of 92 degrees with a relative humidity of 85 percent puts you there. 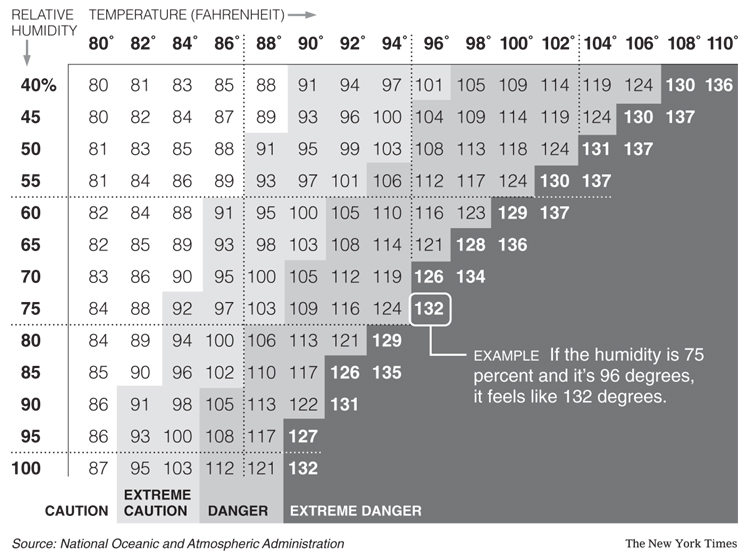 humidity (hu·mid·i·ty) (hu-mid´ĭ-te) [L. humiditas] the degree of moisture, especially of that in the air.

absolute h. the actual amount of vapor in the atmosphere expressed in weight per unit volume.

relative h. the percentage of moisture in the air as compared to the amount necessary to cause saturation, which is taken as 100.

insensible p. those evaporative losses of water from the moist surfaces of the body (such as the skin and respiratory tree) not due to the secretory activity of glands.

sensible p. perspiration due to secretory activity of sweat glands.

Our bodies get cooled by water evaporating from our sweat. The loss of the heat of evaporation is the cooling mechanism. The more that the atmosphere is already saturated with water vapor, the harder it is to cool our bodies, IHMO. All corrections are always appreciated.

Heck, 93 degrees with 90% humidity is a typical summer day here in the Florida Keys. That’s off the chart on your scale there. I have a construction company and I’ll tell you it’s absolutely brutal, but only twice in 25 years in business have i had to pack someone in ice from heat exhaustion, both times it was a newbie who did not know how to pace themselves or drink enough fluids.

In the old days we checked the thermometer. But that was not making readings exciting enough for the weathermen so the heat index was invented.

I just use a few fans...it's not bad once one gets used to it.

“In the old days we checked the thermometer.”

No, in the old days we stuck our heads out the window/cave...

THIS summer, however, I'm eight months pregnant, and I pretty much am utterly miserable. :(

Hey, You NYT dolts. It is summer-time in the Northern Hemisphere. For many centuries 'parts of the West' have gotten triple digit temperatures during the summer.

I gotta admit though it was pretty hot in here an hour ago. I had to turn the heater on about midnight and forgot to turn it off.

Also it is often that their body is not acclimatized to the conditions. One should be watchful of folks returning from a vacation in air conditioning. You can lose your acclimatization in a matter of a few days in the A/C. Supervisors are also more subject to going down...standing still and not moving is deadly too.

I thought not, not exciting enough for the climatoids.

THAT would make it tough. I’m not pregnant - although I may look it!!! I’m glad I’m a male or everybody WOULD assume I’m pregnant!!

My Dad had his own heat index, which went like this: Temperature 90 degrees; humidity 90 percent = feels like 180.

12 posted on 07/09/2007 4:36:29 AM PDT by libertylover (Liberals: Trying to convert the U.S. into a country the Founding Father's wouldn't recognize.)
[ Post Reply | Private Reply | To 1 | View Replies]
To: neverdem
A heat index of 126 or higher is extremely dangerous. And it is not as hard to reach as it might sound. A temperature of 92 degrees with a relative humidity of 85 percent puts you there.

OK, NYT, when was the last time that happened in NYC? Probably never. In most non-tropical parts of the country, that is very difficult to achieve. People think it happens because they hear the humidity is 85% in the morning. Later they hear the high temp was 92. They think they humidity is still 85%. Won't happen. As the temp rises, the relative humidity drops. Sure, the 92 is easy, but you aren't going to find 85% humidity at the same time in most places.

Woe is us. It is summer again, Expect some hot days.

Worked most of the day yesterday (11am - 8pm) outside lifting many 40lb bags of rocks, sand, etc., and it was 96° in the shade. It felt great. Nice warm breeze. Summertime, sweet summertime.

It gets hot in the summer and cold in the winter. THe NYT and other media outlets have a generation of writers who think they can whine their way to happiness and self-fulfillment. They want the government to ensure their summers won’t be too hot and the winters won’t be too cold.

Last winter, I started noticing that the National Weather Service, the regional TV stations etc. constantly reported our local temperatures as being a minimum of 5 degrees F, quite often 10 degrees warmer than reality. And they also vastly under-reported snowfalls.... Like we would get 6 inches, they would report 1/4 inch. Eight inches would be reported as two inches, etc.

18 posted on 07/09/2007 6:31:47 AM PDT by LegendHasIt
[ Post Reply | Private Reply | To 11 | View Replies]
To: festus
In the old days we checked the thermometer. But that was not making readings exciting enough for the weathermen so the heat index was invented.

Winters here are even worse than summers. It's almost impossible to find out the actual temperature, because the wind chill factor is just so much more dramatic.