The ad comes as McCain and three challengers vying for his seat — including former Tucson City Councilman Rodney Glassman — face off Sunday in a televised debate, which is expected to be the only one this election cycle.

The debate, held in Phoenix, begins at 6 p.m. and will be televised live on KTTU Channel 18 in Tucson.

These are tough times in Arizona. Takes strong men and women to fix it.

Years ago, John McCain demonstrated his strength in standing up to our enemies abroad. Today’s he’s showing that same resolve getting our economy back on its feet, putting Arizonans back to work.

Fighting against higher taxes and runaway spending, so more money goes into your pocket. Rebuilding our economy to create jobs. Helping struggling homeowners. Keeping us safe here at home. And, insuring that Arizona military bases remain vibrant. John McCain will never give up.

Today, in this economy, we need that kind of man in Washington, D.C.

John McCain is fighting for us. Character matters.

Then why did you support the TARP bailout, you treasonous bastard?

Why would he need a Spanish language ad? Aren’t voters supposed to be able to read, write and speak English? Amnesty here we come. 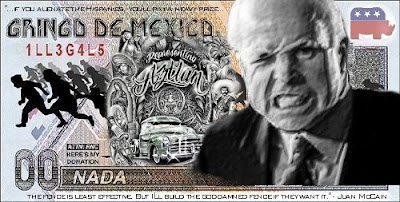 ...and that was all I needed to read before this rant of mine. The indicator on my tolerance meter is nearing empty.

I've personally had it up to here with the Spanish language polluting nearly all forms of media...and it's especially egregious here in Texas.

Just today, while driving to work, I saw two billboards for Reunite Wine in Spanish and this was not in a predominantly Mexican area of town. Plus, there's the aural effluence of Mexican music on seemingly every other radio station when I press the scan button. Television is no different with Telemundo, Azteca, Univision, Galavision, Estrella and more crowding out what used to be good viewing choices in English.

Add to that the brazen flying of the Mexican tri-color at car lots, grocery stores and other business that I saw here in North Texas just a few weeks ago on September 11. That's an especially hallowed day for Old Glory -- the Red, White and Blue not the green, white and red!

McCain's pandering to the Mexicans residing in Arizona is but the latest in a long list of America losing her cultural identity to a third-world cesspool.

This is America, we speak English!

Thanks to all the dopes who helped this liar get reelected.

You and I is gonna pay.

A rot be upon you.

Yes, they are. Unless there is voting fraud. This might tempt more than a few to vote for the Dem.

He has it in Spanish, because he didn’t want his message to inflame the Americans. (/s)

Are you supporting McCain’s opponent, Democrat Rodney Glassman, whose stands on issues are 100% aligned with Obama? Not to mention the result of the Dems maintaining control of the Senate — is THAT your real agenda?

The primary is OVER. Now it’s us against the Dem — you are either with us or with the Obama-Pelosi-Reid Democrats.

McCain’s spokesman, Brian Rogers, countered: “No matter what language you use, it’s clear that the Obama-Glassman agenda of higher taxes, bigger government and more spending has been a miserable failure for all Arizonans.”

>>> Aren’t voters supposed to be able to read, write and speak English?

There are no such provisions in law. Your high school lacked civics classes?

>>> This is America, we speak English!

and Italian and German and Chinese and Korean and Vietnamese ad infinitum.

These McCain as Goldstein threads are pathetic.

There are no legal provisions that voters MUST speak, read, or write English. I’ve seen voter pamphlets in multiple languages. If an American went to live overseas for a prolonged period, and indeed became a dual citizen, I daresay that said American would it far easier to vote in his host country’s elections (provided it’s permissible) if the information regarding the election were in English. America is the only land I know of that provides this flexibility for our more recent citizen who were born in far-off lands where English is not the primary language. An informed voter is the best voter.

And again, you are correct. We speak multiple languages in America, though it’s fair to say that English is the de facto language (not the official language; we don’t have one). Most recent arrivals (not all) do make some effort to learn English, even if imperfectly. I once recall, many moons again, when I worked retail in SoCali. A young woman came in asking for an item in Spanish, and it my rather clumsy and halting Spanish, told her my Spanish was deficient, and if she could ask in English. Much to my (pleasant) surprise, she spoke English as good (if not better, grammatically) than anyone born in the USA - she was just shy about her level of English proficiency (naturally, I told she needn’t have any fear of communicating in the future). She wasn’t born in the US - probably illegal. But she spoke it good, I’ll say that. Nonetheless, one must bear in mind that non-native English speakers will always think in the mother tongue. Typically, the kids of immigrants act as translators, and generally, by the 3rd of 4th generation, they’re just as American as hot dogs and apple pie (both of which come from Germany).

Sounds to me like someone just doesn’t like hearing the Spanish language spoken (me, I love hearing Japanese - beautiful language).

” I’ve personally had it up to here with the Spanish language polluting nearly all forms of media...and it’s especially egregious here in Texas.

Just today, while driving to work, I saw two billboards for Reunite Wine in Spanish and this was not in a predominantly Mexican area of town. Plus, there’s the aural effluence of Mexican music on seemingly every other radio station when I press the scan button. Television is no different with Telemundo, Azteca, Univision, Galavision, Estrella and more crowding out what used to be good viewing choices in English “

I noticed this too driving through Texas this week. It seemed like every other radio station was in Spanish. Just like Los Angeles ;-)