In his later years, Benjamin Franklin became vocal as an abolitionist and in 1787 began to serve as President of the Pennsylvania Society for Promoting the Abolition of Slavery.

The Society was originally formed April 14, 1775, in Philadelphia, as The Society for the Relief of Free Negroes Unlawfully Held in Bondage...The Society not only advocated the abolition of slavery, but made efforts to integrate freed slaves into American society.

"It having pleased the Creator of the world, to make of one flesh all the children of men, it becomes them to consult and promote each other's happiness, as members of the same family, however diversified they may be, by colour, situation, religion, or different states of society. It is more especially the duty of those persons, who profess to maintain for themselves the rights of human nature, and who acknowledge the obligations of Christianity, to use such means as are in their power, to extend the blessings of freedom to every part of the human race; and in a more particular manner, to such of their fellow creatures as are entitled to freedom by the laws and constitutions of any of the United States, and who, notwithstanding, are detained in bondage, by fraud or violence.— From a full conviction of the truth and obligation of these principles, — from a desire to diffuse them, wherever the miseries and vices of slavery exist, and in humble confidence of the favour and support of the Father of Mankind, the subscribers have associated themselves, under the title of the 'Pennsylvania Society for Promoting the Abolition of Slavery, and the Relief of free Negroes unlawfully held in Bondage, and for improving the condition of the African race.'" 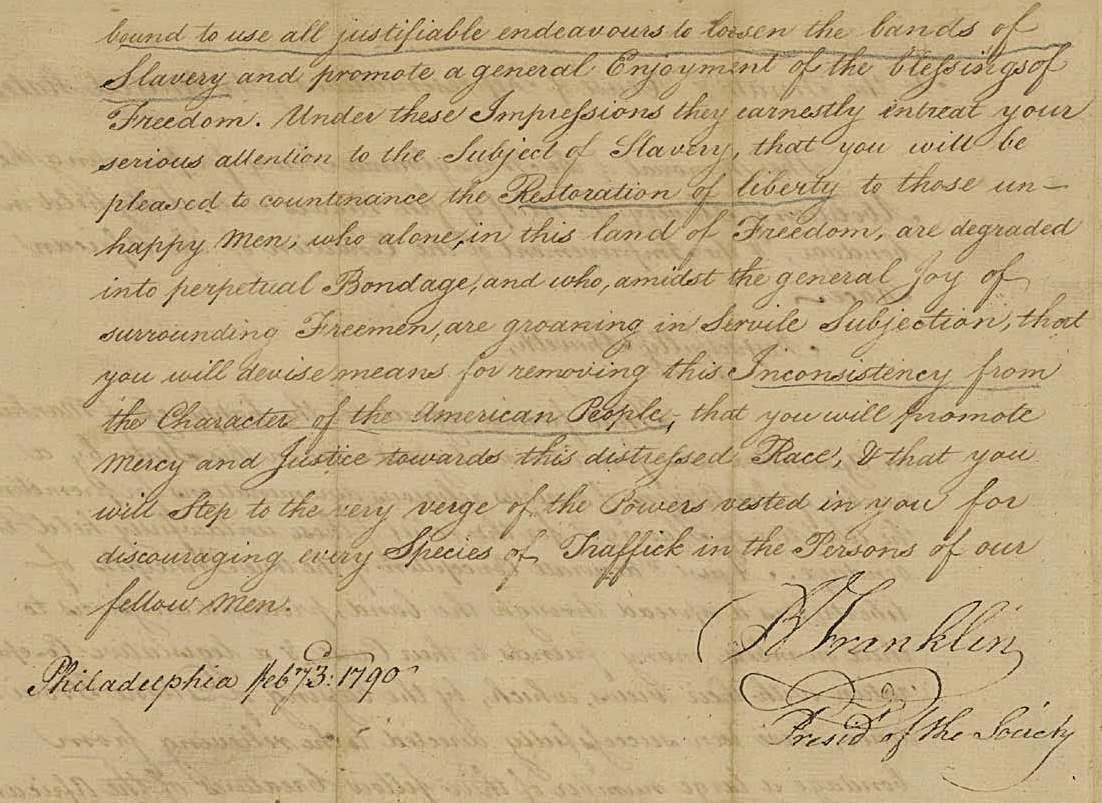 TOPICS: History
KEYWORDS: abolition; abolitionist; americanrevolution; benfranklin; benjaminfranklin; civilwar; constitution; foundingfathers; franklin; slavery Navigation: use the links below to view more comments.
first 1-20, 21-40, 41-60, 61-80 ... 281-287 next last
"Benjamin Franklin, as a young man, , owned slaves, and his newspapers carried slave sale and auction advertisements. At the same time, however, he published numerous Quaker pamphlets against slavery and condemned the hideous practice in his private correspondence. It was not until after the ratification of the United States Constitution that he became an avid outspoken opponent of slavery.

In 1789 he wrote and published several essays supporting the abolition of slavery and his last public act was to send to Congress a petition on behalf of the Pennsylvania Society asking for the abolition of slavery and an end to the slave trade. The petition, was signed on February 3, 1790, and it asked the first US Bicameral Congress to "devise means for removing the Inconsistency from the Character of the American People," and to "promote mercy and justice toward this distressed Race." " 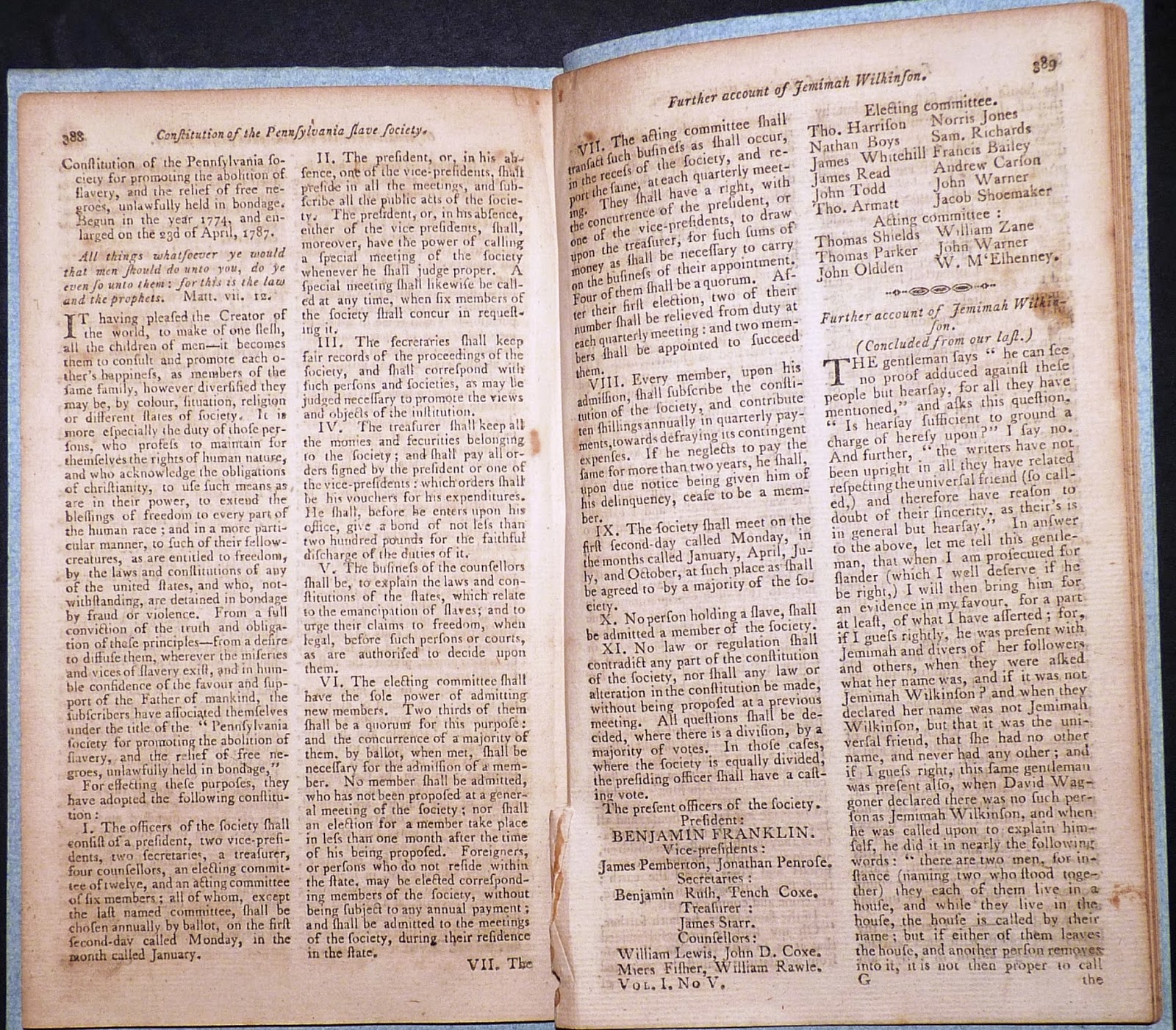 Read Sen. Mike Lee’s book to see what some of the other Founders thought. A very good read and some surprises. Also touches on why the EC came to be.

“Benjamin Franklin, as a young man, , owned slaves, and his newspapers carried slave sale and auction advertisements. At the same time, however, he published numerous Quaker pamphlets against slavery and condemned the hideous practice in his private correspondence”

Interesting that Franklin’s Petition to the Senate is handwritten.

His printer was down that day.

My family writing to relatives in Ireland right after the Revolution, predicted that slavery would and must end, but observed that no one had been able to come up with a way to make it happen. The problem was that almost all of family wealth was found in real estate and property (including slaves) holdings. Many people believed that slavery was immoral, but also was a failure to pass on their estates to their children.

There was lots of rationalizing to justify the institution, especially in the South. The common excuse was patronizing, believing that the poor darkies couldn’t take care of themselves and therefore needed their white masters. The Blacks didn’t not agree with this sentiment.

In the end, the Union Army settled the issue and freed the slaves, and the Reconstruction governments confiscated most of the land for failure to pay property taxes. The South was left in poverty. My family and their neighbors should have thought harder about how to come up with a plan that would work. Of course, it’s easy for me to say.

When Franklin did own slaves he likely treated them more like family or trusted employees than property.

9 posted on 03/30/2019 2:08:14 PM PDT by higgmeister ( In the Shadow of The Big Chicken)
[ Post Reply | Private Reply | To 1 | View Replies]
To: UnwashedPeasant
Interesting that Franklin’s Petition to the Senate is handwritten.

He should have used an IBM Selectric.

In a letter to his wife Deborah on June 27, 1760, Franklin discloses that one of his slaves, King, has ran away. Franklin never pursued to capture his runaway slave, and even when King was found, Franklin did not forcefully bring him back to bondage.

As an indentured apprentice to his brother, Ben was for all intents and purposes a slave in the latter’s Boston printing business. He must have eventually made the connection and realized any non-penal forced servitude was immoral and indefensible.

In my elementary school history classes, we were taught that many Americans, including slave owners, had moral objections to the concept of slavery from the founding of our country, but they saw no other way to feed a nation.

We were told that until the advent of modern engines, tilling soil, planting & harvesting crops required manual labor, thus an agricultural economy depended on slavery.

We were told “Negroes” were deemed better suited to working long days in the sun, because their skin didn’t blister & peel like white people’s skin.

We learned that white sharecroppers were often poorer— that is, were not given basic necessities— than plantation
-dwelling slaves, although whites still had the freedom to pursue upward mobility on their own which slaves could not.

We were taught that the invention of the internal combustion engine is what finally made it possible to begin phasing out slavery. Work formerly done by men & mules with picks & plows could now be done by machines.

We learned that “manumission” — the practice of slave owners freeing individual slaves & their families deemed capable of self-sufficiency— was a common practice.

We learned that “freedmen” themselves often purchased & owned slaves or house servants.

We learned that the first blacks to hold public office soon after the Civil War— example: P.B.B. Pinchback— were elected in the South!

We were taught that the abolition of slavery was ONE issue over which the Civil War was fought. Others included the North’s control of imports & exports, ports & shipping, taxation. “State’s rights” was the South’s rallying cry over all this, not a “dog whistle” for “racism” & “white supremacy.”

We were taught that hanging (”lynching”) was common punishment for white people accused of crimes, too, whether they were guilty or not, because lynch mobs aren’t hard to get riled up.

We were taught. In elementary school.

Great post, but I’d take issue with your comments about “patronizing” southerners, who “didnt think the darkies could take care of themselves.”

Largely true, but I think it was a bit more nuanced.
The dividing line was reading. Many pro-slavery whites feared slaves becoming educated might lead to widespread slave revolts. Some whites were apoplectic at the very idea of blacks ever becoming self sufficient, and IIRC laws were passed that FORBADE teaching slaves to read.

Hard to enforce, plus, it was also argued that reading the Bible was a civilizing influence on the “savages.”

So, many slave owners TAUGHT their slaves to read & encouraged them to learn higher skills in preparation for freedom “some day.”
Manumission— the practice of freeing the most loyal, skilled, & educated slaves (usually “house slaves” / personal servants) who were deemed capable of earning a living in a cash economy— was quite common, long before emancipation became law of the land.

Thus slave owners themselves whittled away at the “peculiar institution” by educating their slaves & encouraging them to become teachers & ministers to other slaves.

OTOH, many slaves resented their more educated brethren who acted “uppity” with their book-learning and ability to “pass” into the white world. This divide in the black community continues today.

“When Franklin did own slaves he likely treated them more like family or trusted employees than property.”

Nobel slavery - the only kind that existed up North.

Of the original 13 states, only 13 of them were slave states.

All of this is complex and cannot be summarized with a single paragraph or two. Your comments are excellent, especially the divide between slaves taught to read and write and all others. One unfortunate outcome of the abolition movement was the enactment of anti-manumission laws which brought an end to a practice of freeing selected slaves. I think that patronizing is a good choice of word to characterize the attitude of white society, especially among the women.

My wife’s 2d great grandmother was a plantation owner and slave owner. Her husband had been killed in a gunfight in Falcon, Arkansas in 1858. When the Union Army began to make an appearance in Southwest Arkansas, she packed up the entire household: children, cousins, slaves, and the livestock and went to Bastrop, TX where relatives lived. Her grandson wrote a story in a Wild West magazine about their journey. He wrote that his grandmother freed her slaves at the end of the war and when she returned to Arkansas, most of the former slaves wanted to go with her.

Bunk. The Union Army freed her slaves and they didn’t want anything to do with the good old life on the plantation (It had been burned anyway). When she left, none of the former slaves went with her.

“In the end, the Union Army settled the issue and freed the slaves, and the Reconstruction governments confiscated most of the land for failure to pay property taxes.”

The idea that the North “fought to free the slaves” was controversial then and remains so.

No one disputes the North used armed force to destroy most of the South, and later levied confiscatory taxes to confiscate property they wanted.

Recruiting posters from the Civil War, encouraged men to join the colors, with one or both slogans: Save the Union and Free the Slaves. Kansas called themselves the Free State and it didn’t mean free stuff.

“Recruiting posters from the Civil War, encouraged men to join the colors, with one or both slogans: Save the Union and Free the Slaves.”

For the purpose of this post, let’s stipulate that President Lincoln and the North did indeed “fight to free the slaves.”

In the moral sense that can be justified. If slavery was morally wrong, what could be more justified than using guns to kill people who owned slaves? After all, the purpose of the federal government is to kill immoral people, the argument goes.

But from the view point of the United States Constitution I will argue that Lincoln was wrong to “fight to free the slaves.”

The United States Constitution - the original one - included pro-slavery provisions. Slavery was legal. In fact, of the 13 original states, 13 of them were slave states.

U.S. Presidents really should not take up arms to violently overthrow the United States Constitution. The peaceful amendment process is the way to legally amend the Constitution. Prior to the war, neither Lincoln or any other member of Congress ever introduced a proposed constitutional amendment to abolish slavery.

It has been awhile since I have heard the argument made that Lincoln “fought to free the slaves.” Maybe he did.