On the radio this past week, I mentioned Alan Jay Lerner, author of My Fair Lady, Camelot, Brigadoon, Gigi, On a Clear Day You Can See Forever, etc. And about twenty minutes after I came off-air I remembered a conversation I had with him decades back. The Pope was on tour somewhere (my estimate from the time period would be eastern Canada): he'd landed at the airport to be greeted by a shy moppet bearing a garland of flowers, and he'd kissed her head. And Alan showed me the headline above the picture in the newspaper:

- a song of his from Gigi. And so we started discussing the fondness of sub-editors for using song titles as headlines - and he and I simultaneously pounced on that morning's big front-page pic, of the Princess of Wales with her newborn baby boy:

That conversation was a long time ago, in Alan Lerner's London home just off the King's Road in Chelsea. Yet, as you can see at right, the editors still reach for that ancient song title. In fact, its usefulness to headline writers seems to have outlived the actual song. So, with Their Not Quite Royal Highnesses still consuming a truckload of column inches, I thought I'd put in a word for the semi-prince across the water's musical namesake.

I wonder how long he’s been writing it :-)

Wonderful Read! I remember the Ragtime Revival and seeing the elderly Eubie Blake on TV. He could still tickle those ivories! :-)

Thanks for posting this.

That was an amazing and wonderful link.
So much rich heritage.i admit the 2 Harrys singing Wild about Harry was my fave
Thank you for posting

Ragtime had basically flamed out by Prohibition...and Eubie lived long enough to play before President Reagan at Lincoln Center.

Gunther Schuller of The New England Conservatory attempted a revival of the style back in the 80’s. That’s when I fell in love with the style.

I remember seeing Eubie Blake on the Merv Griffin show. He was sitting at the piano, telling a story and he got a bit lost. He just abandoned the story, shrugged and said, “I dunno where I was going ... but I remember how to play the song.” He then he played it beautifully.

Indeed. Eubie Blake was on several of those variety/talk shows during that era. I really liked him a lot.

Great, thanks a million for posting this. I just shared on FB! Amazing stuff in there.

How awful that Eubie Blake had 20 siblings who died? Life has certainly gotten easy, that’s what it made me think.

We live on velvet tuffets now and yet we still complain!

How can one man know so much?

Great stuff! I was playing in Reno in about ‘79 and we heard that Hubie Blake was playing down the street in some club just off the strip. We ran down there and heard about 30 minutes, just him on a piano. Fabulous.

Steyn’s attempt to describe the syncopation of Eubie Blake’s “I’m Just Wild About Harry” is a mess.

The song is written in 4/4 time—which means it has four quarter notes in each measure, with the fastest notes being quarter notes.

The normal accentuation for such a piece would be

But Blake’s “I’m Just Wild About Harry” has

instead for two bar groups

with occasional four bar groups returning to the normal accentuation.

In performance, it actually sounds as

[as does some Latin music, such as the bossa nova]

I knew Eubie Blake, and spent hours with him—both in interviewing him about Joe Gans, the great lightweight champion from Baltimore who Blake knew for years—and also going through Blake’s music with him.

He was a tough guy, as I have found most people who live past 90 are.

He was very competetive, as most top level musicians are.
He and his wife Marian would put music on the piano rack in front of me and he would say, “I bet you can’t play this one” or sometimes, “No, two slow” as he indicated the proper tempo.

Since he was an improviser, writing down his pieces was difficult, as he never played a piece exactly the same each new time.

We always had a great time together. After a certain amount of time, he would excuse himself for a bit, saying as he left the room, “My kidneys...”

It was actually his wife Marion (his 2nd wife, who had been a dancer in one of his shows) who engineered his reapearance in his 90’s on the Johnny Carson type shows.

Both he and his wife complained to me the TV shows only wanted him to play his ragtime pieces, which he had written in the 1890’s, when he had written many other types of music since then.

I had originally gone to interview him about Joe Gans, whom he had known for years, even though Gans died of TB in 1910 (a year after his last fight).

From knowing Gans, Blake actually knew a huge amount more about boxing than most people would.

Can you imagine getting to interview Blake for hours about Joe Gans SEVENTY ONE YEARS after Gans had died in 1910. My visits to Blake were in 1981.

You should send this to Steyn. 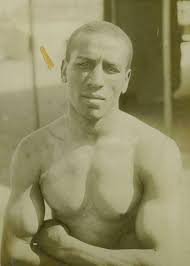 Eubie Blake's longtime acquaintance JOE GANS, probably the best fighter there ever was.

Very interesting! Amazing that someone would be on TV playing music he had written in the 1890s!

I just listened to the first Nero Wolf story “Fer De Lance” on audio book. The book was written in about 1932, and when they said the murder victim had been born in 1875 I was shocked.

The past is not even past, but time marches on.