Dear Mr. Page: I agree with our Native American population. I am highly jilted by the racially charged name of the Washington Redskins. One might argue that to name a professional football team after Native Americans would exalt them as fine warriors, but nay, nay. We must be careful not to offend, and in the spirit of political correctness and courtesy, we must move forward. Let's ditch the Kansas City Chiefs, the Atlanta Braves and the Cleveland Indians. If your shorts are in a wad because of the reference the name Redskins makes to skin color, then we need to get rid of the Cleveland Browns.

The Carolina Panthers obviously were named to keep the memory of militant Blacks from the 60's alive. Gone. It's offensive to us white folk.

The New York Yankees offend the Southern population. Do you see a team named for the Confederacy? No! There is no room for any reference to that tragic war that cost this country so many young men's lives. I am also offended by the blatant references to the Catholic religion among our sports team names. Totally inappropriate to have the New Orleans Saints, the Los Angeles Angels or the San Diego Padres.

Then there are the team names that glorify criminals who raped and pillaged. We are talking about the horrible Oakland Raiders, the Minnesota Vikings, the Tampa Bay Buccaneers and the Pittsburgh Pirates!

So, there you go. We need to support any legislation that comes out to rectify this travesty, because the government will likely become involved with this issue, as they should. Just the kind of thing the do-nothing Congress loves.

As a die-hard Oregon State fan, my wife and I, with all of this in mind, suggest it might also make some sense to change the name of the Oregon State women's athletic teams to something other than "the Beavers (especially when they play Southern California. Do we really want the Trojans sticking it to the Beavers?

I always love your articles and I generally agree with them. As for the Redskins name, I would suggest they change the name to the "Foreskins" to better represent their community, paying tribute to the dick heads in Washington DC.

TOPICS: Chit/Chat; Humor; Miscellaneous; Society
KEYWORDS: abitdirty; chicago; chicagotribune; clarencepage; districtofcolumbia; illinois; nationalfelonsleague; nfl; redskins; washingtonredskins
This is supposedly a letter sent to Clarence Page of the Chicago Trib in response to his piece on changing team names Not sure of its validity but it is funny
1 posted on 07/06/2020 9:33:45 AM PDT by Bell Bouy II
[ Post Reply | Private Reply | View Replies]
To: Bell Bouy II

This turned a bit dirty at the end. Nyuck Nyuck.

I suggest changing the nane to Palefaces.

Thirty years ago I used to crack up at the team names in Oregon. Ducks and Beavers. The country’s first metrosexual teams.

There are more team names which should be changed.

Boston Celtics is offensive to the Celtic people.

Notre Dame Fighting Irish is offensive to the Irish.

New England Patriots and Philadelphia 76ers hearken back to the American Revolution, which means those names have to go.

Phoenix Suns and Miami Heat are celebrating the evils of global warming.

I’m sure others are offensive for various reasons. 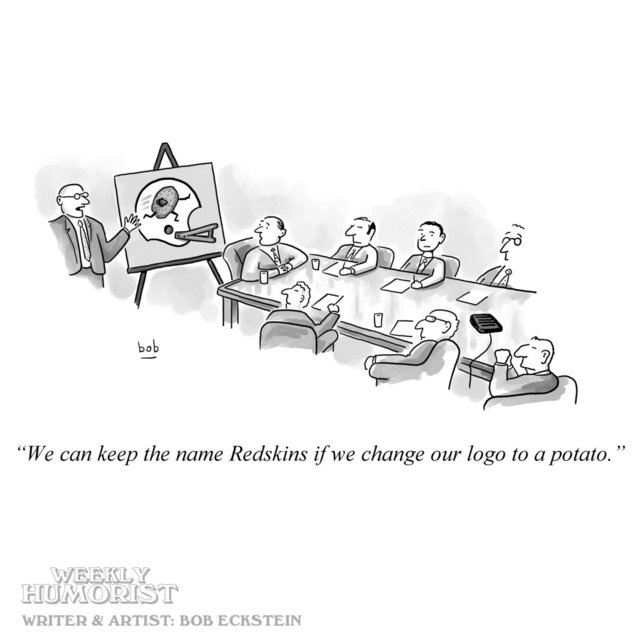 My vote is for the Washington Foreskins.

And that was rather stupid of him. Now some folks will be less likely to share his rather important message.

Now some folks will be less likely to share his rather important message.

Those prudes can delete the “a bit dirty” part and send it on.

What about the New England Patriots? I’m sure most patriots back then were either slve traders, slave owners, or those who turned a blind-eye to the whole issue of slavery.

The Washington Thinskins. Because they are so sensitive.

Drop the name of our first President from the name of the city and that “team” as well. Just call the city the “District of Columbia” and that “team” The Swamp Rats. Oh, while were at it, the “Nationals” should be called the “Post Turtles”, for more than obvious reasons.

Washington Redskins can save a few bucks by going full Cincinnati and keep their existing jerseys by just changing the stitching and renaming themselves the Reds.But I hesitate to recommend it because Reds in DC might conjure up images of Democrats taking over the Federal government and scaring the children.

If you have ever tried to trail a deer through a
thicket of Confederate Roses you would know how
bad it can be.

National Felons League, so I don't much care, but this was pretty funny. A few years back some vegan group suggested the team NOT change its name, but adopt the redskin potato as its mascot. Trouble with that is, the Cancel Culture is coming for the redskin potato, I'm sure of it.