'The only reason' for spying was to 'inform the president'

Former federal prosecutor Andrew McCarthy pointed out that counterintelligence operations by the FBI, Justice Department and are carried out for the president.

So it would have been the responsibility of the Obama administration's counterintelligence investigation of the 2016 Trump campaign to make sure Barack Obama knew what was going on, he said in a Fox News interview with Sean Hannity on Tuesday night.

He said the "only reason to do them is to inform the president with the information he needs to protect the United States from foreign threats."

"And here we know at various junctures we have actual factual information that this investigation was well-known to President Obama," McCarthy said.

"If things were working properly, the president should have been alerted about it and informed about it – it was a very important investigation," McCarthy said. "If they actually believed what they were telling the court, that it was a possibility that Donald Trump was actually a plant of the Kremlin, it would have been derelict on their part not to keep the president informed."

Okay. Fair enough. There you go, Mr. President, have at it. You may want to start with Gropin’ Joe’s ties to Ukraine.

This is all conjecture until someone finally frees the fricking documents.

Obama was never more than a street punk puppet post turtle, put there as the face of the disgusting cabal running our nation that included the Clinton and Bush families.

Never accomplished a thing in his life in his own right.

It’s what community organizers (communists) do. 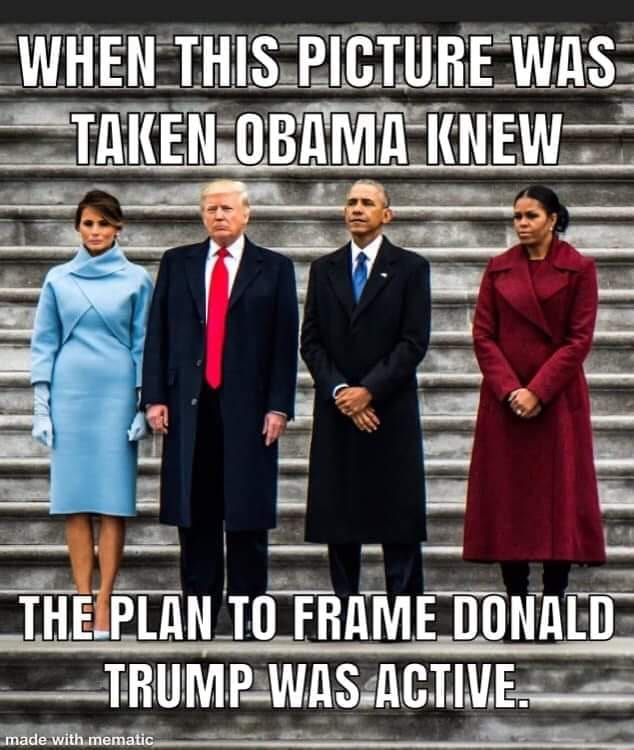 Now!...Knowing what we know now...its time to hang “they/them” for treason and sedation.....after a fair trial of course..it really is that simple... a 1st yr law student could get a conviction...

Was Obama worried about Trump having access to his legit birth certificate?

Obama was involved in Trump spying up to his nipple rings.

Obama should be in prison for fraud.

Implicating Obama in the IG’s report, will be called racist. Even if Obama is guilty as hell.

It’s because this was done at Obama’s direction that nothing will be done about it.

I mean, you got the first mainstream African-American who is articulate and bright and clean and a nice-looking guy. I mean, that’s a storybook, man, you can’t let the fact that he’s not a natural born citizen get in the way of him being the first black President...../s

Dang, the wookie looks like she just rolled out of bed. The 0bozo has his typical arrogant El-douche look.

Thank God they are gone.

Is that a beautiful to ugly line up?

I think B. Hussein Obama is an empty suit. He believes in the Leftist Marxist Bolshevist Khmer Rouge cause, but he's too stupid to actually pull it off. He relies on the Valerie Jarretts of the world to try to pull of the coup against the lawfully elected President of the United States, Donald "Big Dawg Daddy" Trump.

And to protect the country they had to frame Trump and hold the country hostage for 3 years?