The blessing of what's being called "the official Bible for the new U.S. Space Force" at the Washington National Cathedral on Sunday is drawing an outpouring of criticism on social media and condemnation from a prominent religious freedom advocacy group.

"The Military Religious Freedom Foundation (MRFF) condemns, in as full-throated a manner as is humanly possible, the shocking and repulsive display of only the most vile, exclusivist, fundamentalist Christian supremacy," MRFF founder and president Mikey Weinstein wrote in a statement denouncing the Bible blessing. "The utilization of a Christian bible to 'swear in' commanders of the new Space Force or any other [Department of Defense] branch at ANY level is completely violative of the bedrock separation of church and state mandate of the First Amendment of the U.S. Constitution."

We used to hear talk of missile gaps with the Russians - maybe one day we will hear there is a Bible gap if we are not careful.

He further characterized their target as “”incredibly well-funded gangs of fundamentalist Christian monsters who terrorize their fellow Americans by forcing their weaponized and twisted version of Christianity upon their helpless subordinates in our nation’s armed forces.”

[ How queer, don’t we hear that Satanism is now a part of the US Military? How come his anti-Christian MRFF doesn’t have any Satanists? ]

Criticism
Weinstein has come under criticism for his larger than average (for a non-profit) salary and his practice of voting on his own compensation (he is one of the voting members of MRFF’s 3 member board).[33] In 2012, he received total compensation worth $273,355 according to IRS filings accessed on the nonprofit transparency website GuideStar

They do not mention if in the National Cathedral deranged men can go to the girls bathroom, I suppose they can. 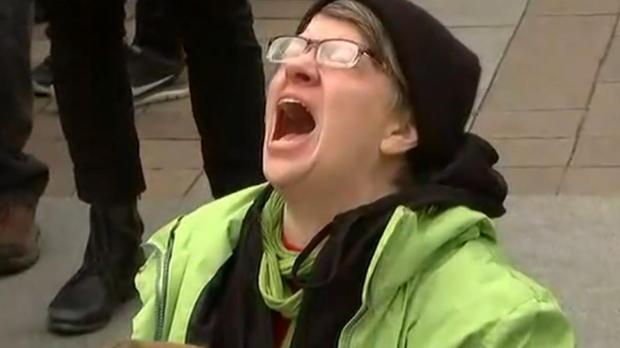 "The Military Religious Freedom Foundation (MRFF) condemns, in as full-throated a manner as is humanly possible".

I’ve emailed with this guy.

Sh.t all you want all over Christianity and he’s good with it but say a bad word about Israel and as he has said, it’s go time and he will get physical.

He tries to make believe he’s concerned about ALL religions seeping into the military.

It’s a lie. A little reading up on him proves that.

I think it’s GREAT that he is willing to defend Israel with his life.

And YES, I would and have felt the same way about any Christian that hates Judaism.

We got one common enemy. And they want us all dead or enslaved.

Since when did NPR start doing satire? They had me going until they used Mikey Weinstein as the nutcakes name. Good on ya, NPR. You almost had me.

Mikey Weinstein.....send the mechanics to fix his car

I love seeing the picture of that gentically-defective monosexual. It remings me that nature doesn’t bat 1.000 out of the box. And also why we need weed killer.

I suppose it’s a good thing when the enemies of decent Christian values makes themselves so readily apparent.

I never heard of this group until now. I doubt they represent anyone other than the fringe folks who’ve decided to buy into their twisted dogma.

Make the book “littler”, paint it red, and NPR will go away—happy.

Mikey? Is this the cereal kid?
“Hey Mikey”!

Should have used the Koran, nothing would have been said!

“in as full-throated a manner as is humanly possible,”

Perhaps he would be happier in Israel. Fewer Christians to trigger him

He reminds me of the neighbor’s Chihuahua. All bark with no bite, and completely irritating. One that thinks he’s bigger and badder than he really is and just won’t shut up. I’m really getting tired of him.

There’s not Nearly as much money in being anti Christian in Israel as there is in the US!

He makes a fortune.

And that’s a sad statement when leaders in Israel have more respect for Christianity than the dem party here.

Openly practiced and has a place within the chaplain's handbook along with Wicca, paganism, and Islam.

18 posted on 01/14/2020 2:48:26 AM PST by spirited irish
[ Post Reply | Private Reply | To 2 | View Replies]
To: dp0622; Swarthy Greek Immigrant; SaveFerris; Roman_War_Criminal; metmom; Elsie; ...
During the Obama Regime from Hell, Mikey Weinstein and his "foundation" were treated as an official arm of the Department of Defense. He and the hate group he founded are nothing of the kind.

But if Mikey went off on some tantrum about "fundamentalist Christians", the Pentagon went into Christian persecution mode in the entire military.

In April of 2013, Obama's Defense Department hired Weinstein as a "consultant." To this day, anti-Christian groups deny that, but it's true. 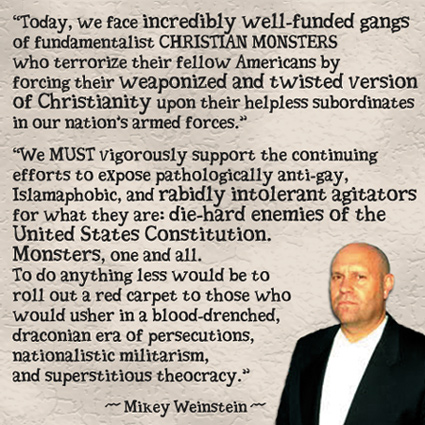 Yup, Bible loving Christians were "monsters" and the Gospel message was "rape."

"This is a national security threat. What is happening [aside from sexual assault] is spiritual rape. And what the Pentagon needs to understand is that it is sedition and treason. It should be punished," - Mikey Weinstein

Well, now that Trump is President, all this nonsense ended, right?

Weinstein is still calling the shots in the Defense Department.

So basically he’s the equivalent of Rev. Al Sharpton, or Jesse Jackson, but for anti-theists, instead of blacks.