“The Chinese Communist Party (CCP) frequently pressures and coerces U.S. companies to conform to its political values and foreign policy. Because of China’s market size, individual companies often feel as though they have no option but to comply with CCP demands.”

The following list was originally released by the U.S. House Foreign Affairs Committee, compiled by ranking member Michael McCaul (R-TX) and his team. It is reproduced with permission.

Tiffany & Co. removed a tweeted advertisement featuring a Chinese model wearing a Tiffany ring and covering her right eye with her right hand, a pose many Chinese social media accounts claimed referenced a pose that has come to be associated with the Hong Kong protest movement.

Activision Blizzard suspended Hong Kong-based Chung Ng Wai, a professional player of one of its online games, after Chung expressed support for Hong Kong protesters in a post-game interview. In addition to making Chung ineligible to receive prize money he had earned in 2019, the company fired the two individuals who conducted the interview with Chung.

Comedy Central’s “South Park” was removed from major video streaming plat- forms in China after the cartoon aired an episode satirizing the PRC government’s retaliation against U.S. companies for statements in support of Hong Kong.

All of this crap is grounds for war. If the Rats take over,and they will some day, they’ll sweep it under the rug or let the Chicoms take over officially.

We must expel the entire Chinese influence here then punish all spies and traitors. Enough is enough!!

FYI> You don’t need “permission” to quote from or reproduce or show a government-released document. It is in the public domain unless it is in the “classified” category. Getting the govt/congressional agency “credit” for it is the proper method of “sourcing” it.

“Revealed”?
Really, who was not already aware of this?
Far worse goes back MANY years, the spying and intellectual property theft is beyond description.
Yet we still allow Chinese citizens and “Students” free rein with no actual effort to monitor them.

Encourage all domestic manufactured goods labeled: “Made in America” We did this back in the 70s.

Between 1994 and 1996, Chung donated $366,000 to the DNC. Once the truth of this situation was revealed to the public, all of the money was allegedly returned. Chung told federal investigators that $35,000 of the money he donated came from Liu Chaoying and, in turn, China's military intelligence.

Specifically, Chung testified under oath to the U.S. House Committee investigating the issue in May 1999 that he was introduced to Chinese Gen. Ji Shengde, then the head of Chinese military intelligence, by Liu Chaoying. Chung said that Ji told him: "We like your president very much. We would like to see him reelected. I will give you 300,000 U.S. dollars. You can give it to the president and the Democrat Party."Both Liu and the Chinese government denied the claims. The monumental disaster of the US-China Relations Act is becoming clearer.It was Bill Clinton’s last (cough)
"presidential accomplishment," the historic moment when a Democrat president of the greatest superpower of all time,
sap-happily handed its demise to a backward country, poised to strip America of its intellectual and
technological superiority. 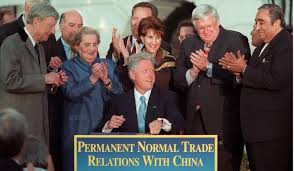 13 posted on 05/20/2020 6:17:35 AM PDT by DarthVader (Not by speeches & majority decisions will the great issues of the day be decided but by Blood & Iron)
[ Post Reply | Private Reply | To 9 | View Replies]
To: HighSierra5
DemoRats have been working with the Chinese since Clinton discovered they were a smiling moving ATM machine... Dems sold us out to them... and 'the press' can't see it because their lips were sown to democrat butts for the past decade. "Thanks for the news packets - we owe you for paying for stories so we can hold the illusion we're ethical 'journalists'"...

Eff the New York Times and Washington Post... and the misery they've brought to our country.

Time for “ NATIONAL DISTANCING “ from the corrosive CHICOM plague pit.

Cant trust them to NOT be poisonous in every way.