To: RaceBannon
Senile Joe can't remember what he had for breakfast, much less what happened with Ukraine.

CNN will politely tell the judge that this has been debunked.

At this point, he probably doesn’t remember having been to Ukraine.

5 posted on 05/20/2020 4:30:21 AM PDT by wastedyears (The left would kill every single one of us and our families if they knew they could get away with it)
[ Post Reply | Private Reply | To 1 | View Replies]
To: All
The Ukraine court ruled then there was adequate evidence to investigate Shokin’s claim that Biden’s pressure on then-Pres Poroshenko
-----including Biden's blatant quid pro quo-----Biden's threat to withhold $1 billion in US loan guarantees,
amounted to unlawful interference in Shokin’s work as Ukraine’s chief prosecutor. 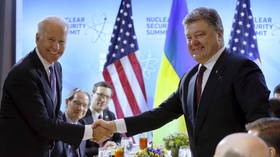 Biden and then-President Petro Poroshenko------so corrupt he abandoned Ukraine and sought refuge in another country.

CNN will politely tell the judge that this has been debunked.

Exactly! ...and not just CNN.
I don’t think this would come to an actual prosecution, but either way, if something like this came down on Trump, the MSM would make hay out of it. Lots of hay. But since it’s Biden (a democrat) the legal recommendation is going to be portrayed as kangaroo court stuff, if it’ even gets covered at all

Had I gotten a nickel each time left claimed this was “debunked,” I could buy the Chrysler Building.

I know there are those here calling for Barr to investigate and prosecute Biden, but politically that would be a huge mistake. Not because of backlash from the media - Trump doesn’t care - but because it would remove this as a campaign issue. All Biden would have to say is “this is the subject of an ongoing investigation so I am not able to comment. I’m confident that the investigation will prove that I did nothing inappropriate in my dealings with the Ukraine. Next question”

I saw this happen in a Canadian election campaign years ago where our corrupt Prime Minister Jean Chretien was under suspicion of doing dirty land deals to line his own pockets. There was all sorts of documentation pointing to his guilt, but anyone with an ounce of intelligence knew that our politicized RCMP would never accuse a Liberal Prime Minister, just as your FBI would never accuse a Democrat President. But in the middle of the election, one of the idiot party leaders (Joe Clark of the now defunct Progressive Conservative Party) called on the RCMP to investigate. Chretien agreed, and then said he could not answer any questions because of the investigation. The compliant media dutifully killed the story and Chretien was re-elected.

This issue needs to remain alive during the fall campaign. President Trump’s team can use this much more effectively without Biden being able to hide behind a fake investigation. Hammer Biden in ads and in campaign speeches and he will have to respond. But it’s difficult to respond when you know you are guilty.

When Ukraine requests extradition of Joe and his son, the Feds should not oppose it.

So, who is going to be the dem nominee?

The person opposes it, typically not the government.

Be nice to have Hunter sitting in a Ukrainian prison during the campaign, though.

Good point. I’m not sure if we have a extradition treaty with Ukraine. But even if we don’t, the government should allow the extradition.

The too-lazy-to-govern “bring us together” figurehead candidate.

Joe Biden alleged the prosecutor was corrupt, has anyone in the media asked Biden for an example of the corruption?

There needs to be great emphasis made on the reason Biden wanted Shokin, the chief prosecutor, removed. Shokin was ready to charge Burisma and several of its principals with serious crimes including money-laundering.

Who will remit ultimate payment to ClintonCo, Judge Vovk, or the demented predator’s mark, Prosecutor Shokin?

My moonbat lactation activist sister has been screaming for this after first bashing all her millennial buddies the morning after BJ Clinton’s wife’s humiliating loss.

Big Media needs Mike, though, to keep telling us how much more beautiful he is than Melania for the next 5 years.

As long as Big Media keeps telling us the demented rapist is polling way ahead of Trump, he’s the Designated Loser.