Leon Klinghoffer, our father, was one innocent civilian among thousands who were murdered under the rule of Yasir Arafat and the P.L.O. As a family who has unfortunately been touched by Mr. Arafat's terrorism, we find that our only solace in his death is that he cannot kill anyone ever again.

It is mind-boggling that some would view him as a diplomat, martyr, hero and even a peacemaker. This is definitely not how we know him to be. To us, Mr. Arafat will always be a murderer and a terrorist; and one less terrorist on this earth is a good thing. 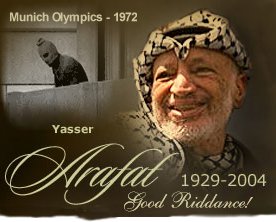 Right on! We should be preparing ourselves for the day that that "freedom fighter" Fido Castro falls off a cliff and the msm has their ultimate Gorbasum...

Makes my brood boil to remember that this piece of sh*t was given the Nobel Peace Prize.........or was it the 'piece prize'?

Why do any of us even care what the Dinosaur Media says and does anymore? We saw what they did, we know who they are. They're over.

"Especially given the fact the died from AIDS and slept with his bodyguards."

I doubt they slept much.

As one that was totally shocked when the terrorists hit the Achilles Lauro and killed Mr. Klinghoffer, I thoroughly sympathize with his family and daughters in condemning Arafat who sponsored that heinous attack.

Although I believe we should pray for his soul. I still would like to p$ss on his grave.

87 posted on 11/13/2004 8:33:09 PM PST by rogator
[ Post Reply | Private Reply | To 38 | View Replies]
To: Judith Anne
Who, at the beginning of his career, enabled him to evade justice? I recall that Rudy Giuliani investigated him for Mr. Klinghoffer's murder and the murders of 35 other AMERICAN CITIZENS. Arafat should have been covertly killed back then, imho

Well, can understand it. But..don't lower yourself to his type of activity. He's dead and gone and no one will miss him and...the world is better off for it. Now he faces his maker and will find out what real suffering really is...like what he put on all those people...especially children.

You are MOST correct! Continue building the wall no matter how many continue to oppose it!

The same cannot be said for certain previous occupants of the Oval Office.

As for Dean Acheson, "Speak well of the dead or say nothing at all."

Of course that is what Bush meant. All Christians pray for the salvation of everyone. We all hope that even a man like Arafat might come to know Christ as his savior. Jesus died for a sinner like me, and a sinner like Arafat.

92 posted on 11/13/2004 9:38:07 PM PST by tuckrdout (You lose your right to complain about taxes, if you voted for any democrat!)
[ Post Reply | Private Reply | To 21 | View Replies]
To: wagglebee
One of the terrorists who murdered Mr. Klinghoffer was living comfortably in Iraq when we invaded. I hope that he's rotting in a jail now. If so, the war against Iraq has an even greater justification. Saddam Hussein was certainly a friend to the terrorists and an enemy of the United States. Just so the liberals never forget, I'll repeat that putting Hussein out of power was the right thing to do.

"Speak well of the dead or say nothing at all."


Good idea; I think I'll try it now.
My thoughts on Arafats death are the following:

Instead of sending the Deputy Sec of State, we should have sent the guy who cleans the White House toilets to his funeral.

Watching the treatment given this murderous thug one has to wonder ,
has the world gone mad?

96 posted on 11/14/2004 4:52:45 AM PST by apackof2 (Damn the torpedos! Full speed ahead!)
[ Post Reply | Private Reply | To 1 | View Replies]
To: dennisw; Cachelot; Yehuda; Nix 2; veronica; Catspaw; knighthawk; Alouette; Optimist; weikel; ...
If you'd like to be on this middle east/political ping list, please FR mail me.
97 posted on 11/14/2004 5:21:36 AM PST by SJackson ( Bush is as free as a bird, He is only accountable to history and God, Ra'anan Gissin)
[ Post Reply | Private Reply | To 1 | View Replies]
To: wagglebee; Alouette
The reactions of the lunatic left from those who control the NY Slimes to the MSM and around the world re Arafat's death tells us all that we need to know about them. They view Arafat as a hero and President Bush as a war criminal. These are mentally ill people who are dangerous to innocent and sane people.

"It is mind-boggling that some would view him as a diplomat, martyr, hero and even a peacemaker. This is definitely not how we know him to be. To us, Mr. Arafat will always be a murderer and a terrorist; and one less terrorist on this earth is a good thing."

98 posted on 11/14/2004 5:22:33 AM PST by Grampa Dave (FNC/ABCNNBCBS & the MSM fishwraps are the Rathering Fraudcasters of America!)
[ Post Reply | Private Reply | To 1 | View Replies]
To: wagglebee
NYT Editor's Response To Klinghoffer's Daughters:

"Yes, yes, yesyesyes, of course... but: let's be fair about this, please. Your father was a Jew, after all."

... and the worst part is: it isn't all that far-fetched a scenario, really.

99 posted on 11/14/2004 5:54:46 AM PST by KentTrappedInLiberalSeattle (I feel more and more like a revolted Charlton Heston, witnessing ape society for the very first time)
[ Post Reply | Private Reply | To 1 | View Replies]
To: wagglebee