The Islamic republic regime is preparing itself for its last stand against the Iranian People and the world community. In that line the theocratic regime is hardening its position in the domestic and foreign fields by strengthening its control at all levels and placing its hardcore militiamen at key posts.

Already decision has been made to back the regular police and army forces by the repressive Bassij militia and several changes have taken place in police and military commands.

The new government is also adopting a much more radical Islamist aspect by having 18 minister all coming from the Pasdaran Corp. (Guardians of Islamic Revolution), Bassij para-military or various Intelligence circles.

The names and backgrounds of Ahmadinejad cabinet's members are as follow:

1. Minister of Foreign Affairs: Manouchehr Mottaki, 52, chairman of parliamentary foreign affairs committee, former Deputy Foreign Minister and ambassador to Turkey and Japan, former liaison officer between Islamic Revolutionary Guards Corps (IRGC) and Foreign Ministry, former Vice-president of Islamic Cultural and Communications Organisation, an agency created by the Supreme Leader for export of Islamic revolution to other parts of the Muslim world. Mottaki has been hawkishly critical of Iran’s nuclear negotiations with the West

2. Minister of Defence: Mostafa Mohammad-Najjar, 49, brigadier general in the Revolutionary Guards, joined IRGC when it was formed in 1979, took part in bloody campaign to suppress Kurds in 1979 and 1980, commander of IRGC operations in Lebanon, Palestinian territories and Persian Gulf states in 1980s, head of Military Industries Organisation. He was in command of the IRGC expeditionary force in Lebanon when on October 23, 1983, at 6:22 a.m., a suicide bomber drove a large water delivery truck to the Beirut International Airport where the Marine Barracks was located. The bomber and his accomplices had hijacked the original truck on its way to the airport and sent another one, loaded with explosives, in its place.

4. Minister of the Interior: Hojjatol-Islam Mostafa Pour-Mohammadi, 46, in charge of Special Department for Security and Intelligence in the office of the Supreme Leader, former Deputy Minister of Intelligence and Security, former Military Revolutionary Prosecutor

6. Minister of Oil: Ali Saeedlou, 41, long-time ally of Ahmadinejad in ultra-conservative Abadgaran faction, former deputy mayor of Tehran for finance and administration, replaced Ahmadinejad as interim mayor of Tehran after presidential elections, former deputy director of Defence Industries Organization affiliated to the Ministry of Defence, former chief representative of the Ministry of Intelligence and Security (secret police) in the Ministry of Commerce, former staff member of the Supreme National Security Council

7. Minister of Commerce: Masoud Mir-Kazemi, 45, chairman of IRGC’s Centre for Strategic Studies, chancellor of Shahed University (set up exclusively for relatives of "martyrs" of the Islamic revolution), former logistics commander in Revolutionary Guards

9. Minister of Justice: Jamal Karimi-Rad, 49, spokesman of the Judiciary, former revolutionary prosecutor in Zanjan and Qazvin provinces, director of Taazirat Department (agency for implementation of corporal punishment, including flogging in public, etc) in Qazvin

10. Minister of Transportation: Mohammad Rahmati, 47, Minister of Roads and Transportation in Khatami’s cabinet (the only incumbent in the new cabinet), former head of Universities’ Jihad, a paramilitary organization affiliated to the Revolutionary Guards that recruited Islamists in universities, a former leadership member of Office for Strengthening of Unity (OSU), a key planner of the Islamic Cultural Revolution in 1980, when all universities were ransacked and shut down by Islamists in a bloody purge of dissident students and academics.

13. Minister of Science, Research and Technology: Mohammad-Mehdi Zahedi, 51, hard-line chairman of Kerman City Council, former professor of mathematics in the University of Shahid Bahonar in Kerman

14. Minister of Labour and Social Affairs: Mohammad Jahromi, 47, deputy chairman for executive affairs of the ultra-conservative Guardian Council, founding member of IRGC in Gilan and Mazandaran provinces in 1979, governor of Zanjan, Lorestan and Semnan provinces, former member of secretariat of the State Expediency Council

17. Minister of Education: Ali Akbar Ash'ari, 52, editor of the daily Hamshahri, which belongs to Tehran City Council (he was appointed by Ahmadinejad when the latter was mayor of Tehran), former Deputy Minister of Islamic Guidance, former representative of Ministry of Intelligence and Security (secret police) in the Ministry of Education

18. Minister of Communications and Information Technology: Mohammad Soleymani, 51, former Deputy Minister of Science, former chancellor of University of Science and Technology of Tehran (UST), former head of Higher Electronic Research Centre, head of the IRGC-affiliated War Committee in the Ministry of Science and in UST in the 1980s (Ahmadinejad studied, taught, and founded the Islamic Association in UST)

19. Minister of Economy: Davoud Danesh-Jaafari, 51, chairman of Majlis committee on economy and finance, a leading member of hard-line Islamist faction, Abadgaran, in the Majlis, former member of Central Command of Jihad Sazandegi (a branch of Revolutionary Guards)

21. Minister of Cooperatives: Ali-Reza Ali-Ahmadi, 46, Ahmadinejad’s presidential campaign manager, former leadership member of the Islamist student organization OSU, former fellow-activist with Ahmadinejad in the Islamic Student Association of University of Science and Technology, adviser to the Supreme Council for Islamic Cultural Revolution (which conducted a bloody purge of Iranian universities in the early 1980s), worked for some time in Imam Hossein University of the IRGC

Last week, Ahmadinejad appointed hard-liner Ali Larijani as Secretary of Supreme National Security Council and put him in charge of nuclear policy. Larijani, an IRGC brigadier general and former Deputy Minister of the now-defunct Ministry of Revolutionary Guards, will attend cabinet meetings and is expected to play a key role in the new government. He is a former director of state-run radio and television.

A Daily Briefing of Major News Stories on Iran:

"If you want on or off this Iran ping list, Freepmail DoctorZin

Join Us At Today's Iranian Alert Thread – The Most Underreported Story Of The Year!

"If you want on or off this Iran ping list, Freepmail DoctorZin” 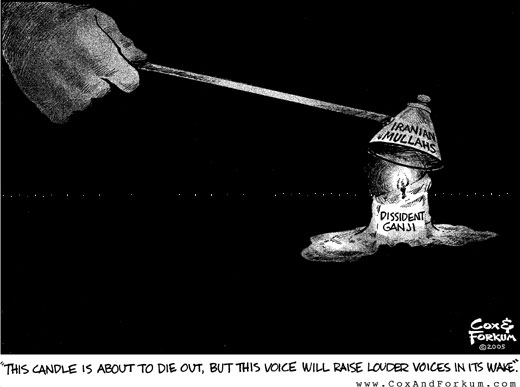 May God bring comfort and peace to Ganji, I only hope his suffereing is not in vain.

I don't get the payoff of that.

Easier said than done.
1. He has good...no make that very good security, so getting a clear shot at him is hard.
2 Getting the shooter out would be....difficult. And we don't do sucide mssions.

Unfortunately, this problem is not about one man... It's terribly unfortunate that even if Mr. Ahmadinejad were mysteriously abducted the problem wouldn’t vanish with him. He's part of a system gearing up for war with the free world. Note that the world (via UN/IAEA) just told Iran to hold off on uranium enrichment at their N-plant in Esfahan and they told the world, "F-off". Supreme leader Ayatollah Khamenie, not Mr. Ahmadinejad, has built himself a war cabinet that can't be casually picked off with snipers... This situation requires the resolve of the free world in cooperation with the Iranian people who recognize that the Iranian government’s defiance on this scale must be held to account.

We’re facing a big problem. How big? Let’s do the math together… 4Million BPD (that’s barrels per day) at a meager $60 PB (that’s per barrel) turns out to be $87.6Billion PY (that’s per year)! That much wealth in the hands of a war cabinet!!!

Think about it... If Carlos Hathcock were the answer to the entire world's big problems, the history of Vietnam would read differently...

FYI With probably more than 300 kills during the Vietnam War, Carlos Hathcock is the most famous sniper in United States History... ...[At Quantico] Hathcock spoke against the "John Wayne" mentality of many soldiers, always emphasizing skill and quiet deliberate thought as essential to be an effective sniper.

We need to bomb hell out of Iran ASAP. What does President Bush think he is accomplishing by doing nothing while the Iranians continue to kill and help kill Americans in Iraq?

This is not like Vietnam, its much worse. This time around our own President Bush doesn't even bomb the enemy sanctuaries.

(This may sound like a flame, but I don't mean it that way)
So many people here seem to think that the world is a Tom Clancy novel or something.

To read today’s thread click here.
Join Us At Today's Iranian Alert Thread – The Most Underreported Story Of The Year!

"If you want on or off this Iran ping list, Freepmail DoctorZin”