LANSING, MI -- On a cold Michigan day and among hundreds of supporters, Gretchen Whitmer was sworn in and officially inaugurated as the state’s 49th governor.

She struck a tone of bipartisanship, acknowledging legislative leaders from both parties and saying, “We owe it to the people we serve to cast partisanship aside, to roll up our sleeves, and to build bridges together.”

Her campaign logo incorporated the Mackinac Bridge, and she drew on that as an example of a time Michiganders worked together to build something that connected people and strengthened the state’s economy. 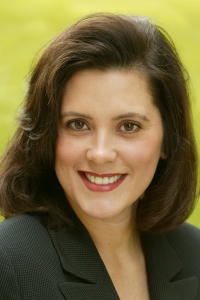 She’ll be sorry. It’s like being elected to Latrine Cleaner.

She is a by product of Jennifer Granholm who screwed this state up so bad she had to move to California.

You’d have thought they learned from Jenny Grandstand not to elect another Commie bimbo. Guess not.

Cliches will get her nowhere.

8 Years of a GOP governor is enough for Michigan swing voters.

The MI GOP needs to rebuild and retool in 2019. Period.

Michigan now has radical Lesbian (who lives with her wife) as AG. The GOP legislature passed a bill to limit the AG power in lame duck. The outgoing Rino Governor (Snyder) vetoed it as one his final acts. I expect her to force schools to allow the creeps into girls locker rooms and showers as one her first acts. The Rats got 3 proposals on the November ballot that gaurenteed a Rat turnout.

Her rhetoric does not apply to herself.

Brainwashed Communist with less intelligence than a blow-up doll.

8 years of a RINO. They haven’t elected a Conservative since Engler’s 3rd term in 1998. Bill Schuette would’ve been a good Conservative Governor.

Yep I was surprised Snyder didn’t veto the right to work law. I know he came very close.

She has 4 years to “fix the damned roads” and get rid of the retiree pension tax or she’ll be a one termer.

I smell a gas tax coming...

Jenny Grandstand screwed the sate up so much I had to move to Maryland. She blew me away

Pity the poor Michiganians that were victimized by the renovated Michigan Democrat Vote Fraud Machine.

17 posted on 01/01/2019 5:30:31 PM PST by an amused spectator (Hillary For Prison)
[ Post Reply | Private Reply | To 2 | View Replies]
To: gibsonguy; GuavaCheesePuff
The Rats got 3 proposals on the November ballot that gaurenteed a Rat turnout.

They pulled something with the smaller counties and the turnout.

I think they were able to computerize and target the smaller counties for Get Out The Fraud operations - registered Democrats who weren't voting.

They weren't able to get the information from the larger counties (because it would take those counties past the election to produce the info) - whose turnout DROPPED in the Nov 2018 election.

However, in the smaller counties, the turnout for the Dems went BANANAS.

The legalizing dope (prop. 1 ) brought out a lot of dems pot heads.

Interestingly, the Greens who the Hillbots whined about in 2016 voted Green again in 2018.

It didn't make any difference, because The Cheat was up and running on all cylinders.

And no, the small conservative counties in Michigan aren't infested with potheads.