Scientists reported Thursday on the strongest sign yet that Saturn's giant moon may have a salty ocean beneath its chilly surface.

If confirmed, it would catapult Titan into an elite class of solar system moons harboring water, an essential ingredient for life.

Titan boasts methane-filled seas at the poles and a possible lake near the equator. And it's long been speculated that Titan contains a hidden liquid layer, based on mathematical modeling and electric field measurements made by the Huygens spacecraft that landed on the surface in 2005.

The latest evidence is still indirect, but outside scientists said it's probably the best that can be obtained short of sending a spacecraft to drill into the surface — a costly endeavor that won't happen anytime soon.

"If the analysis is correct, this is a very important finding," Tobie said in an email.

The finding by an international team of researchers was released online Thursday by the journal Science. The scientists pored over data from the orbiting Cassini spacecraft, which flew by Titan half a dozen times between 2006 and last year and took gravity measurements for a glimpse of its interior.

They found Titan got squeezed and stretched depending on its orbit around Saturn, suggesting the presence of a buried ocean. If Titan were solid rock and ice, such deformations would not occur.

"Titan is quite squishy," noted Jonathan Lunine of Cornell University, who was part of the research team.

Scientists did not delve into the characteristics of the ocean, but previous estimates suggested it could be 30 miles to 62 miles deep and contain traces of ammonia. Titan is one of the few worlds in the solar system with a significant atmosphere, 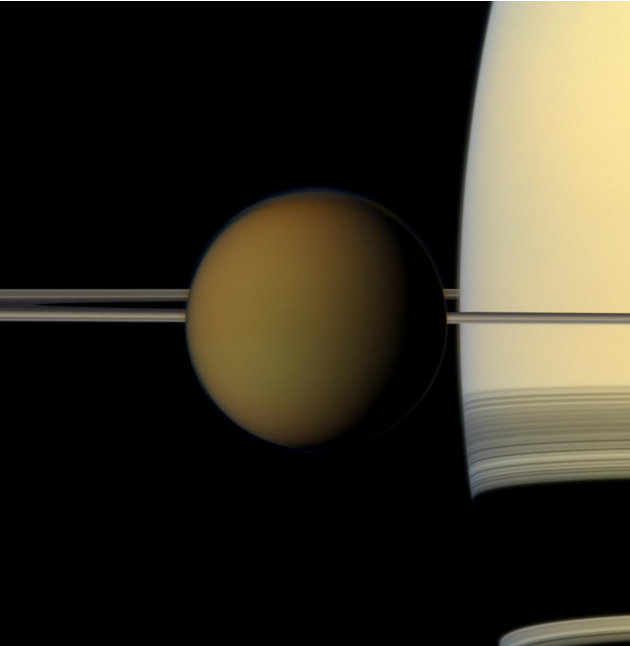 This undated true color image by the Cassini spacecraft released by NASA shows Saturn's largest moon, Titan, passing in front of the planet and its rings. A new study released Thursday, June 28, 2012 suggests there may be an ocean below Titan's frigid surface. (AP Photo/NASA)

Send Haliburton to frack it. I need the stock price to go back up.

this begs the question “is there life”?

I have heard it was methane. Can we send the carbon police there to save that planet?

I wish we could send another probe there. A more complex probe this time that could move, take ultra-clear pictures, sound, and transmit to an orbiter that could send it back to Earth.

That’s why predators are needed in nature. The cows on Titan had no predators and the levels of methane just kept building up until they were out of control.

If you’ve got a sea, you might as well harbor it.

More proof of the abiotic theory of petroleum formation.

The underground oceans are filled with subterranean fish that are held in high esteem by the Saturian Nymphs.

All I can say is Saturn there looks like it’s wearing one of my husbands shirts.