A simple visit to an obscure factory by Chinese President Xi on Monday is all it took to raise the specter that China could be contemplating cutting off supply of critical materials to the U.S. and potentially crippling large swathes of its industries. Also, fueled by political innuendo in Xi’s recent call for a new “Long March” in reference to a key founding tenet of the Chinese Communist Party, speculators are growing increasingly wary of Chinese export restrictions to the U.S., including rare earth minerals.

As the world’s largest producer, the Middle Kingdom has a vice-like grip on rare earths supply.

Rare earth minerals, also known as the “vitamins of chemistry”, are a group of elements used in the manufacture of a wide range of equipment in small doses to produce powerful salutary effects. These minerals are extensively used in smartphones, batteries, turbines, lasers, electromagnetic guns, missiles, advanced weapon sensors, stealth technology and jamming technology. For instance, lanthanum is used in lighting equipment and camera lenses; neodymium in hybrid vehicles; praseodymium in aircraft engines; europium in nuclear reactors and gadolinium in MRIs and X-rays. Oil refiners also use rare earth catalysts to process crude oil into gasoline and jet fuel.

China produced more than 90 percent of the world’s supply of these critical elements over the past decade, though its share was lower at 71.42 percent last year.

In 2018, the U.S. Geological Survey identified 35 minerals critical to the country’s economy and national security. America is heavily dependent on imports of these minerals, producing less than a tenth of the world’s supplies and importing half of what it consumes. It clearly highlights the U.S.’ soft underbelly.

Not surprisingly, rare earth minerals are some of the few products that escaped Trump’s latest tariffs. 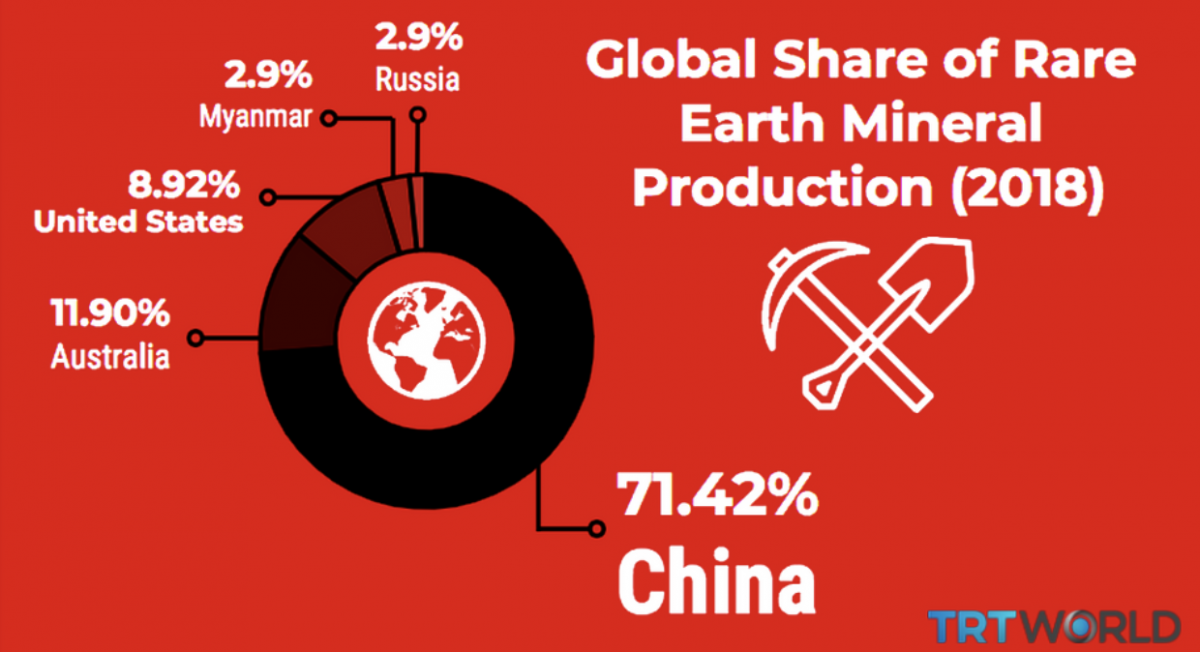 Another place where our “captains of industry” and our government have screwed the pooch! We have many of these materials, but we have not exploited them because of “environmental concerns” in many cases. I have read recently though that China would do this at it’s peril, because if they took that path, we would have no choice but to collapse their economy and we have the means to do so.

1. Rare earth metals are not that rare.

2. They are found in abundance all around the world

3. They are environmentally dirty to mine and refine

4. All China is going to do with the “nuclear option” is to slightly raise the price of rare earth metals and lose their entire market

US and EPA environmental restrictions drove a lot of this, there are at least some mines here in the US, Montana, California.

I think something a lot less dramatic than a Manhattan Project would get the US rare earth mining industry spun back up PDQ. It just takes an increment of national will.

That’s not the last word, that only means that we need to step up our production. We should anyway so we’re not in a bind if China cuts us off. It’s been easier to buy it from China, so we have and most of the companies producing it here have gone under or gone on to do something else. We can start producing it here again and give Australia’s economy a shot in the arm, I’m all good with that.

I worked for a mineral exploration company in 1979 and 1980. One of the geologist told me there are a lot of rare earth deposits in the US and Canada but not exploited because of the environmental litigation drives up the cost of extraction. His job was to file claims to secure their explorations.

8 posted on 05/26/2019 7:49:40 PM PDT by the_daug
[ Post Reply | Private Reply | To 1 | View Replies]
To: SeekAndFind
It turns out that not all rare earths are that rare, with USGS (United States Geological Survey) classifying 17 of those elements as “moderately abundant” with significant deposits in the United States, Canada, Brazil, India, and Australia. The major problem for the U.S. would not be lack of those resources per se, but how quickly it can ramp up production at its existing facility—and possibly scale up.

Correct. I was going to say that. It's not how much they're producing, but how much we have in the ground and how fast we can begin pulling it out. China doesn't want to go this route, else they'll be left with tons above ground to sell and nobody to sell it to.

Exactly, there’s so much mythology going on with China. Their economy is constantly reported in the media as kicking the crap out of everybody else’s because their communist system is so superior and in the words of Buttcrack Hussein, “They get things done.” BS, their economy is in the dumper and is on the edge of collapse. If we quit giving them special treatment on everything, it most likely will fail. They supposedly have this superior military, it’s not. They make pretty scale-models and tell a good story, that’s it. Their military has been on this huge buildup for 40 years and is still a joke. Like the USSR, manpower is all they’ve got. Slaves do not produce good products, that’s been demonstrated time and again through history. If a slave can do a half-assed job without getting caught, he WILL.

Only if U.S. and other sources of rare earth metals are permitted to remain off limits.

“Do NOT depend on us for ANYTHING or you will regret it.”

And the market will adjust so THANK YOU CHINA.

Now you know the real reason we are keeping our fingers in Afghanistan.

Panama Nv. Rare earths right at the edge of town... Maybe not so rare...

Can Hillary sale more nuclear material for the US this time?

Are we crazy? I read like a decade ago we had alternative sources to China. Truly the leadership of this country are idiots.

I looked around and this is what I found!

Rare earth mine In Development in Nebraska. The CEO was previously the CEO of Molycorp, which ran Mountain Pass. The Chinese lowered REE prices to the point where Molycorp could not complete, it went under, the chinese bought Mountain Pass and are sending the raw materials back to China to refine.

In this instance the mine will produce Niobium, Scandium, and Titanium, none of which the Chinese currently produce. They can’t go all Standard Oil and drive their competitors out of business and then buy the mine. At the same time they expect to find other REES besides their primary target.

They are 8 years into the project, have the plans, have the permits, are finalizing financing. NIOBF.

“They supposedly have this superior military, it’s not.”

Yeah, they bought an old POS Aircraft Carrier ( The Admiral Kuznetsov ) from the Russians, and have turned it into a floating turd! We make their military expansion possible by buying from them. Smart people don’t trade with those who are their sworn enemies. Unfortunately, up to 2016, we hadn’t had a president worth spit since RR left office. And Clinton was probably the worst in terms of letting the Chinese into our pants for a buck. Of the lot of them, I wake up every morning hoping that the day’s headline reads both Clintons died in a plane crash, or some awful disease. Or better still she shot him then herself.

If they can be recycled, then we don’t need to mine them or depend upon China for them.

For example, American Manganese has a patented process for reclaiming nearly 100% of cobalt, nickel, and lithium from batteries. (With electric cars increasing exponentially, raw materials for batteries will be in short supply.) This is especially critical regarding cobalt, since the Congo supplies 95% of the world’s supply. In the past three years, American Manganese has gone from nothing to now being almost finished with a pilot plant. If the same can be done with rare earth metals, then China has no “Nuclear Option”. It’s that simple.