Self-help author Marianne Williamson was the most searched Democrat candidate during the second Democrat debate on Tuesday, according to Google Trends.

Williamson was also the top-searched candidate in 49 of 50 states, excluding Montana, where its governor, Steve Bullock, ranked higher.

Williamson captivated viewers with her meandering and unconventional responses and phrases such as “dark psychic force” and “emotional turbulence.” At the last debate, she won attention for saying her plan to defeat President Trump was to “harness love.”

She won some of the loudest applause for her responses on racism and reparations.

Breitbart News’s Joel Pollak reported from a Williamson watch party in Detroit, where dozens of her supporters were thrilled with her performance. “I think she’s doing a really good job of staying true to herself,” Mary of Troy, Michigan, told him.

“The others are just spinning the questions to say what they want to say. Marianne is staying truthful in answering,” she added.

Cynthia, from Bloomfield Hills, Michigan, said: “When the ‘forces’ allow her to speak, she’s slam-dunkin’ it.” The only question, she said, was “whether the country is ready for a Jewish female, speaking almost prophetic, Christ-like words,” she said.

Marianne Williamson, never heard of her. 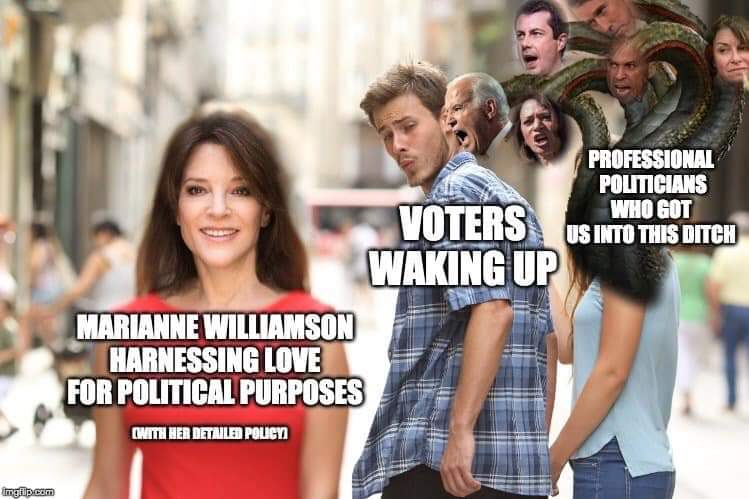 Thankfully, we have a right to support whoever we went. She NAILED the debates and she is the only one who can win against trump. #Marianne2020— Lilith (@9dsaud0u9) July 31, 2019

President Trump "is not just a politician, he's a phenomenon and an insider political game will not defeat him," says Democratic presidential candidate Marianne Williamson on her criticism of President Trump and what she called a "dark psychic force." https://t.co/aVCH6RWwFU pic.twitter.com/XQkXV6XN1X— CNN (@CNN) July 31, 2019

Because people were looking for something else that would be just as out of touch as she is...

She is the only real challenge to President Trump

The others are fake

What is funny is just how few are voting in the Drudge poll. No one watched? No one cares? Are Democrats shocked at their candidates? Should the poll have had Trump listed? He won against this first squad. Will tomorrow be repeat?

One of these days the dnc will find a saleable candidate. It will take the country by surprise We need to keep close watch

Jesus was a human being who while on earth completely self-actualized and fulfilled in all ways the potential glory that lies within us all. He became one with the Essence and Christ Spirit that is in all of us. In that sense, he is our evolutionary elder brother. He demonstrated our destiny.

So, who is Marianne Williamson?

Williamson has a ‘view’ on things that might be refreshing to some Democrats (seeking an outsider). I might even admit that a quarter of her suggestions might appeal to some middle-of-the-road Republicans/Independents. But if you were looking for executive experience, or someone with a resume for the job...she’s even weaker than Hillary Clinton.

I might also add...in the south, she won’t be considered a viable candidate (in the primary system or the November election).

She is a Rasputin in disguise.

I can hear Putin chuckling from here.

I had neighbors who used to go to her (Williamson) “presentations” here in LA. I would call these cat ladies - dangerously psychotic

How is it that a Self-help guru can be a Democrat?

Democrats are all about Big Government help. “You didn’t build that”

If you have the Nanny State to take care of you why would you have to help yourself?

19 posted on 07/30/2019 10:53:28 PM PDT by Pontiac (The welfare state must fail because it is contrary to human nature and diminishes the human spirit)
[ Post Reply | Private Reply | To 1 | View Replies]
To: conservative98; SkyPilot; Roman_War_Criminal; metmom; Mom MD
[ Cynthia, from Bloomfield Hills, Michigan, said: “When the ‘forces’ allow her to speak, she’s slam-dunkin’ it.” The only question, she said, was “whether the country is ready for a Jewish female, speaking almost prophetic, Christ-like words,” she said. ]