President George W. Bush recently signed into law the reauthorization of the North American Wetlands Conservation Act. It's purpose is to encourage voluntary partnerships among public agencies and the private sector to conserve North American wetland ecosystems. It establishes an infrastructure and provides a source of funding to accomplish that end. The Act funds the protection, restoration, management and enhancement of a wetland ecosystem to benefit wetland-dependent wildlife.

According to President Bush, "Today we take important action to conserve North America's wetlands, which will help keep our water clean and help provide habitat for hundreds of species of wildlife. Through this legislation, the federal government will continue its partnership with landowners, conservation groups and states to save and improve millions of acres of wetlands. The North American Wetlands Conservation Reauthorization Act shows our concern for the environment and our respect for future generations of Americans. "With this signature today, the North American Wetlands Conservation Act will be reauthorized for five years. The law authorizes federal money to match donations from sportsmen, state wildlife agencies, conservationists and landowners. Since 1991, more than $462 million in federal grants have helped to encourage $1.3 billion in contributions from others."

"Together these funds have restored streams and rivers, re-established native plants and trees, acquired land that is home to more than a third of America's threatened and endangered species. Because about 75 percent of the wetlands are held privately, we need to encourage cooperation with our landowners. This legislation shows that when government, landowners and conservationists work together, we can make dramatic progress in preserving the beauty and the quality of our environment." Bush also thanked the Congress for supporting this legislation.

Proposed projects are ranked by the U.S. Fish and Wildlife Service's North American Wetlands Conservation Council. Selected, prioritized proposals are recommended to the Migratory Bird Conservation Commission for consideration of funding. Membership consists of the Secretary of the Interior, who serves as Chairman; the Secretaries of Transportation and Agriculture; two Members of the Senate (one is Senator Thad Cochran); and two Members of the House of Representatives. The Commission is authorized to approve, reject or reorder the priority of the proposed projects.

W. THE ENVIRONMENTALIST - "On almost every environmental issue, Bush has upheld the Clinton-Gore position." - THE NEW REPUBLIC

George W. Goes Green - "George W. Bush was not only ratifying Bill Clinton's edicts in last week's run-up to Earth Day. Free market activists who consider themselves allies were told to sit down and shut up about the greening of the new president."

Say It Ain't So, George

W. THE ENVIRONMENTALIST - "On almost every environmental issue, Bush has upheld the Clinton-Gore position." - THE NEW REPUBLIC

Bush is as Green as Gore!

""Christie Whitman, the U.S. Environmental Protection Agency chief, said Saturday that the United States supports the goal of Kyoto but was reviewing its strategy for achieving it."

Press Briefing - June 5, 2002
"Q Ari, if I could change subjects for a second. This morning you said that the President quoted a speech, indicating that the President believes that human activity is largely responsible for the increase in greenhouse gases. But I'm wondering if he also agrees with an EPA report which indicated that human activity is likely the cause of global warming?

MR. FLEISCHER: Let me just read from the President's statement of June 11th on global warming, and let me read from the recent report the EPA submitted to the United Nations. And I think you'll hear that on the key issues, they really sound very, very similar. This is the President on June 11th in the Rose Garden, in a speech where he announced his global warming policies.

"Concentration of greenhouse gases, especially C02, have increased substantially since the beginning of the Industrial Revolution. And the National Academy of Sciences indicate that the increase is due in large part to human activity." That's the President himself speaking.

Here is from the report, page 4, that was just submitted to the United States by the EPA: "Greenhouse gases are accumulating in Earth's atmosphere as the result of human activities, causing global mean surface temperature and subsurface ocean temperature to rise. While the changes observed over the last several decades are due most likely to human activities, we cannot rule out that some significant part is also a reflection of natural variability." And I think what you're hearing is the same thing.

MR. FLEISCHER: That's what the President said in his speech in June.

Q That's not exactly what he said. He does agree with it?

Q He hasn't changed his mind at all?

MR. FLEISCHER: No. Here's -- the bottom line for the President is, number one, he has made a proposal that he believes is a proposal that not only can reduce the problem of greenhouse gases and global warming, but also protects the American economy, so the American economy can lead the world in technological and scientific advances that also have an effect in reducing pollution.

The President has said, citing the National Academy of Sciences, that the increase is due in large part to human activity. The President has also continued, citing both, now this report the EPA has sent to the United Nations, previous evidence from the National Academy of Sciences, that there's uncertainty -- and the recent report notes that there is considerable uncertainty. That's the state of science, and the President agrees with it. I don't think people dispute that.

Q Its uncertainty, but he can still draw that conclusion, that --

Q He didn't exactly do it, but you're saying it now.

MR. FLEISCHER: Again, when the President cites a report by the National Academy of Sciences that indicates the increase is due in large part to human activity, I think you have two reports that are very similar.

Q Why did he call it the bureaucracy yesterday?

MR. FLEISCHER: I think the EPA issued a report that says the same thing. And I think the President was also reflecting about some of the way it was covered, that made it sound as if the report was somehow inconsistent with what he had said previously.

Q I don't think he reflected at all, he just said that, I saw it put out by a bureaucracy. What did he reflect on?

The Washington Times
By Greg Pierce
May 21, 1999
Source

Texas Gov. George W. Bush has changed his tune on a key environmental issue, saying he no longer believes there's any question that the globe is warming, the Fort Worth Star-Telegram reports.

"I believe there is global warming," he said at a news conference last week. Mr. Bush had said just a few weeks ago that the "science is still out" on global warming. The governor, who is leading a crowded field of GOP presidential candidates, said his team of advisers had changed his mind.

"The last time I wasn't certain of the science," he said. "I've had some briefings recently and I'm becoming more convinced that the science proves there's global warming."

"We are delighted that Gov. Bush is acknowledging that global warming is a problem," he said. "We would ask him to take a leadership role since Texas leads the nation in global warming."

But Texas Citizens for a Sound Economy, a conservative group that doubts global-warming theories, says Mr. Bush should take another look.

"We think there's been a lot of questionable and bad science that's been used," said the group's spokeswoman, Peggy Venable.
[End of Transcript]

More Than 15,000 Scientists Speak Out Against Global Warming Myth

"And now, a Republican administration will continue and complete the work of a Democratic administration. This is the way environmental policy should work."
George W. Bush - SOURCE 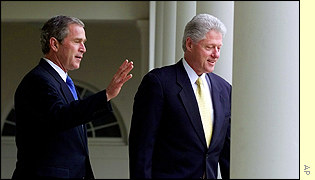 Is he a liberal socialist or a conservative?

I'll tell you what. Format two columns. One on the right. One of the left. The left column stands for socialism. The right column stands for small limited Constitutional government. Afterall, Bush states right on his biography on the White House website that he's a "limited government" kind of guy. See if your computer falls off the left side of your desk. Let me know. Here, I'll help you get started.

SAVE THE WHALES... But don't bring up abortion issues, it might make the democrats mad at us...

The Bush press machine is quiet as they need "real" conservatives to vote for him, the green press loves it but doesn't want Democrats to vote for Bush

It's going good my friend, except for that feeling of sick dismay I get when this president sells out those who put him into office. I get that most days here.

On Dec 7th, the Slick Willie presidential order of no smoking anywhere in 'federal' facilities went into effect.

No smoking in a bar anymore. Do you think the pubbies might change that?

looks like hes caving on n korea down your ways a little too...

You imply that Bush is incorrect in saying that GHGs are increasing and that they are caused by human activity. To support this, you provide links to SEPP.

Here Fred Singer, published at SEPP, states: There is general agreement that the increase in GHGs is due to human activity