A small team of researchers at Purdue University has found the strongest evidence yet of the existence of abelian anyons. They have written a paper describing experiments they conducted designed to reveal the existence of the quasiparticles and have uploaded it to the arXiv preprint server while they await peer review.

Anyons are neither bosons nor fermions—in fact, they are not elementary particles at all. Instead, they are classified as quasiparticles that exist in two dimensions. They can be observed, theoretically speaking, when they appear as disturbances in two-dimensional sheets of materials. Theoretical physicists have suggested their existence since the late 1970s and they were officially named by Frank Wilczek in the early 1980s. Theory has also suggested that they braid, but in ways differently than bosons or fermions. If a fermion or a boson were dragged around another of its kind, theory suggests, the action would not produce a record of what had occurred. But because anyons alter wave functions, they would create such a record. The process involves inserting a phase into the wave function of the particles. In this new effort, the researchers created a device that allowed them to see evidence of such a record.

The device the team created involved moving anyons along a 2-D path; at a given point, the pathway split. One of the paths looped around another anyon which was situated in the center of the device. The other took a direct route before the two paths were reunited. The team then measured the electric current in the device looking for jumps. According to theory, such jumps would be present as anyons were added and then removed from the device, altering the phase. To be able to record such jumps, the device was built in layers of materials that filtered out random noise. The resulting measurements make the the strongest case to date for the existence of quasiparticles, and in so doing, have strongly bolstered theories that describe both their existence and their behavior. They have also likely brightened the hopes of some researchers who have been looking into the possibility of using anyons to create more robust quantum computers. 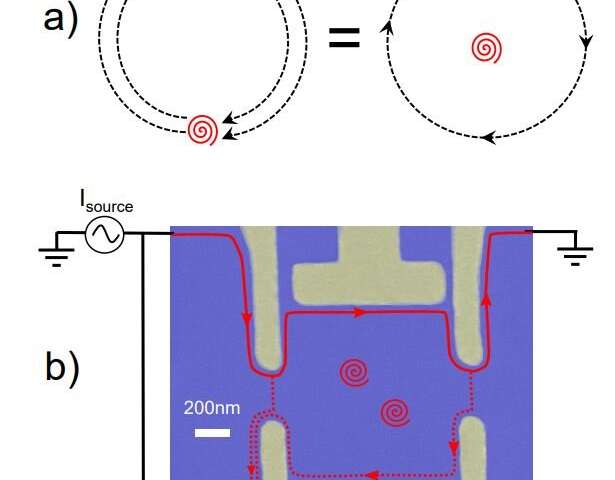 I always have some anyons in my vegetable drawer.

There is no equal representation under the law. The country needs an overhaul.

Then, I always ask, “So, what can we /DO/ with the particle now that we know Einstein was right*?”
I mean, can we grind up a couple gorillion Moles of them and use them as “anyon butter” on our toast?
I get no answers other than “Excelsior!”
- h/t BearManPig

* I know Einstein didn’t theorize anyons.
I use his name as a device.

I kind of understand this.

Is there a practical application for this stuff? Or does it lead to, “What are these things made of?”

Your comment makes as much sense as any on this thread! Maybe even more.

Where’s the proof for the existence of crayons?

Trying to find s “God Particle”. All so they don’t have to believe in God.

The quasiparticles have been shown to coalesce into circular configurations, forming anyon rings.

I will not rest until so-called “fundamental” particles relinquish their privilege, and quasiparticles are accorded full particle status.

Yes, they both pop in and out of reality...

Isaac Asimov wrote a entertaining, easy-to-read book on the neutrino. That’s as far as I got, before tuning out on particle physics.